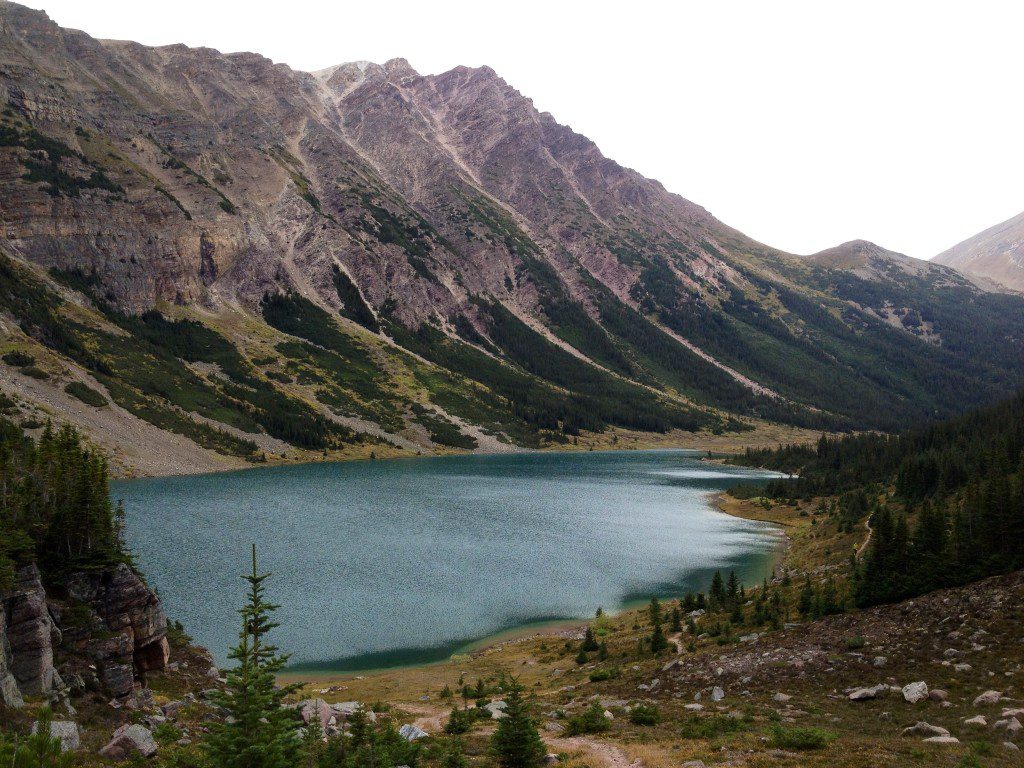 This past weekend saw the running of the TransRockies Canadian Rockies Heli Run. To say this race is unique would be an understatement. It’s true, not many marathons climb 1,000m through thick forest to a pristine alpine lake surrounded by peaks and glaciers. Sure, most races don’t require you carry bear spray or constantly question whether you’re on course while navigating boulder fields and washed out single-track. What makes this event one-of-a-kind is the thrilling fusion of rugged trail-running and air travel.

The event is a team marathon where one partner runs up to the Lake of the Falls while the other is delivered via helicopter. The fresh legs begin the descent while pilots whisk away the exhausted and muddied. The race departs from the Icefields Helicopter Base before turning into the Cline River Valley and a twisting roller-coaster of single-track, multiple river and stream crossings on single log bridges or stepping stones and heart-pounding hands-on-knees climbs. The gorgeous setting, enjoyable trail and fun flight make a great race for trail novices.

I learned of this event when searching out shorter trail races for the end of my summer season. The absurdity of strenuous climb with the effortless and mind-bendingly swift return to base was too much to turn down. I managed to impart my enthusiasm to Devin Featherstone over weeks of winter runs. We would team up to tackle the Heli Run.

On Friday, Devin and I left home and made the leisurely drive through the Icefields Parkway. We chose a campsite for the night near Lake Abraham just minutes from the start.

Saturday morning was a dark and cold contrast to recent runs. In just the past week, it seemed, summer had vanished. Our tent was frosted in iced dew. The chill air was enhanced by my poor choice of attire — shorts and a short-sleeve t-shirt.

Given the small field of entrants, the rather off-the-path locale and the transition away from peak tourist season, the grand finishing arch and starting chute seemed somewhat alien. Camo-clad hunters, waiting to begin their heli-assisted weekend, chuckled and stared at us runners, wearing our vibrantly coloured lab-grown apparel. And, at 9:00 a.m., we meandered into the starting chute after passing a check to ensure we carried our requisite jacket and bear spray.

The morning sun lit the highway as we dashed into the hills heading up the valley and crossing the Cline River and drainages via steep sandy banks. Though I ran alone throughout my run, I was kept ever entertained by the search for course marking.

Due to the flooding across the Rockies this summer, the course along the river was washed away. In lieu of worn single-track, we navigated thick brush, mossy patches, massive fallen trees and rock slides. We hopped across water more times than I recall, picking an invigorating line into the alpine. Though we climbed continuously, there were only a few sections of steep switchbacks that slowed me from a run to a laughable jog. I started to worry, if I had somehow left the course despite following the flagging. I had not come across the checkpoint, 8K from the start.

After two hours, I came into the head of the valley, the lake appearing in front of me. I realized I must have been nearing the finish as helicopters flew nearby just above the trees. I finally spotted a tent atop a hill above the lake. As I crested the hill I noticed the table was empty and only two people were hanging around. I was bewildered. As I ran closer, I asked if this was the aid station and how far I had left to run. The fellow just pointed to a large rock and exclaimed, ‘this is it!’ I didn’t understand and he reiterated that I had finished. Without the finish yet setup, I realized, much to my surprise, that a little uphill running might be quicker than air travel!

I pulled the bear spray out of my shorts and took in the view. I wandered down to where the helicopter landed. I met a train of volunteers and helped haul gear to the station. Within minutes, the transition point was replete with fresh cut fruit, chips, cola and speakers blaring yogic down-tempo tunes.

Within another few minutes ascending runners began to top out and downhillers arrived out of the thin air. I greeted Devin and wished him well as he joined the time-trial-esque queue of runners heading down. I jumped into the chopper and took in one last look at the alpine beauty before the six-minute flight down the valley – a jarring juxtaposition to my two-hour ascent!

The base was quiet. Those hanging about the finish cheered and welcomed runners cruising in from their run down the mountain. Devin came in looking like I was feeling the last time we met – sweaty, out-of-breath and mildly delirious. We celebrated our shared run and thanked all for helping put on a unique and exciting day in the hills.