Like mythical creatures, we’re sometimes seen as folklore. You’ve heard stories about us in races and in running clubs. Occasionally you may have seen us in a race and done a ‘double-take’ not quite believing what you have seen. We generally run alone and if seeing just one of us is rare, seeing us in groups is rarer. Sometimes we camouflage ourselves in bizarre rubberized toe-socks or in minimalist (barefoot) shoes, which resemble many shoes you find in a running store. Maybe you’ve run past us in a race and never knew we were there. 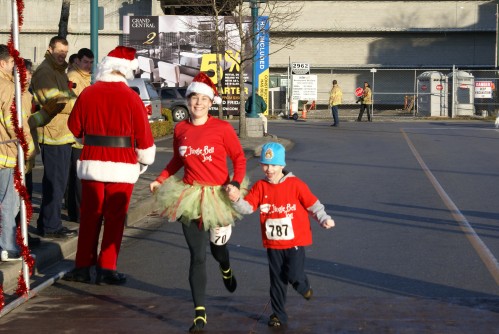 I’m a barefoot runner. I’m on the right side of 40 (just) and most definitely on the wrong side of 38. I’m not super-fit. I have a BMI slap bang in the normal range. I don’t run hundreds of miles a week. I would definitely be classed as a recreational runner.

I run when I get the time and when the pull of the coffee shop isn’t too great on a wintery, wet day. I like running trails more than roads, but you can also find me in the climbing gym, the swimming pool, on the mountains and occasionally being very uncoordinated in a keep-fit class. I have never run further than 14 miles and frankly, I’m not fussed if I never run anything other than half-marathons. I will never qualify for Boston, New York or Western States. I’m a mid-pack runner.

If you come to my house you may find piles of laundry in the bedroom and dust-bunnies under the sofa. I do the school runs, PAC meetings and Girl’s Nights Out. Frankly, I’m kind of normal — “kooky” normal but normal all the same.

Generally barefoot runners are a bit of a disappointment. That’s the strange thing, really. Apart from our fantastic sense of humour and our obviously fabulous good looks – OK, maybe not so much on the second point – as a group we are just like you. We cover all walks of life. We have good runners and bad runners. There are famous barefoot runners and those who … well aren’t. We have ultra-runners and those who find a one mile jog (at 15-minute pace) is their limit.

There are some who use barefoot running as an occasional training tool and others who don’t let shoes touch their feet no matter what.

I started running barefoot in the summer of 2009 after recovering from heel fractures. I was new to running and after only four months, I had broken myself with my horrendous form. After doctors told me to look at other forms of exercise, I decided to act like a petulant six year old and continue running anyway.

I turned to barefoot running and then switched to minimalist running for trails and longer runs outside. After six months, I ran my first half-marathon

As a group, we share some common characteristics. Barefoot and minimalist runners are generally educated. We’re comfortable with technology and new ideas. We’re happy to experiment and we like to find solutions to (injury) problems. If something isn’t working, we want to figure out why.

We don’t tend to take ourselves too seriously. We aren’t afraid to ask questions and we will gladly share any information we have.

Frankly, we’re awesome. Fine, you’ve caught me, I maybe biased on that front.

There is a lot of discussion at the moment about whether running barefoot is good or bad. Just as there is a lot of discussion on whether the modern running shoe does all that it claims. Like any group, barefoot and minimalist runners all have their points of view ranging from overenthusiastic zeal to indifference. However, to most barefoot runners -although these conversations are interesting to us- that’s not too important. What’s important is that we all like to run. We just happen to run with slightly less on our feet.

Are you interested in barefoot running? Want to learn more? Merrell is running a series of Facebook chats discussing barefoot running (and more importantly the role of women in the movement). I will be taking questions as part of this series on Thursday 5th January 2012 from 1-2PM (ET). Click here for details.