Anything that tastes like carrot cake while still being healthy will make runners’ tummies happy after the run. 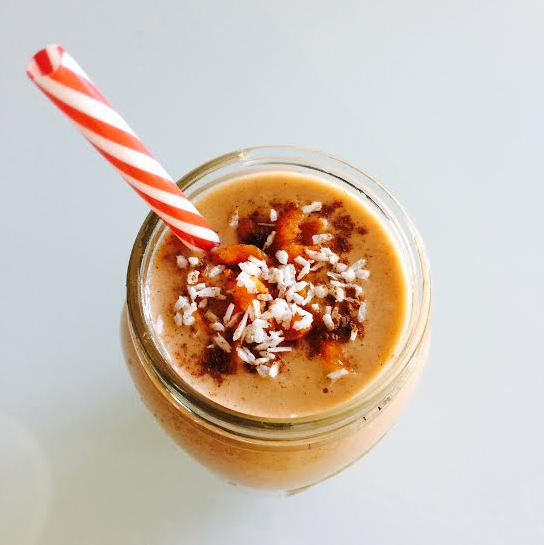 Over the weekend, Kin’s Farm Market, one of Vancouver’s main produce stores, had a special that if you spent $25 you received a free three-pound bag of carrots. I had to replenish the dwindling food stores I had at home thanks to being off racing all weekend so I made a pit stop on the way home and redeemed my free bag of rabbit food.

Carrots are one of the first vegetables that run out in my house. I always crave something crunchy after runs and carrots fill the bill. They are a great salad addition, an easy snack to pair with hummus and most importantly, the main ingredient in the greatest dessert of all time: carrot cake. The only issue with my adoration of carrot cake is that it’s not exactly the healthiest thing to have for dinner– least not every day. So, if an opportunity arises to have a more nutritionally sound rendition, I jump at the chance.

When scrolling through a new found favourite blog Gimme Some Oven, I saw that there was a recipe for a Carrot Cake Smoothie. Carrots are naturally sweet, as are bananas, so I just added a small amount of the maple syrup that was suggested. To give it a little more bang for its buck, I added a half-scoop of the VEGA vanilla sport protein powder. Now it’s a protein packed, delicious post-workout smoothie that satisfies my carrot cake cravings.

Recipe adapted from Gimme Some Oven

– ½ up plain yogurt (Greek or regular)

1. Add all ingredients to a blender and pulse for 30 to 60 seconds until smooth. If the smoothie is too thick, add an extra quarter cup of liquid to thin it out.

*Note: If you don’t have a high-powered blender, you may have to blend this smoothie for a bit longer. Or you could also shave the carrots (instead of dicing them) beforehand to make blending easier.