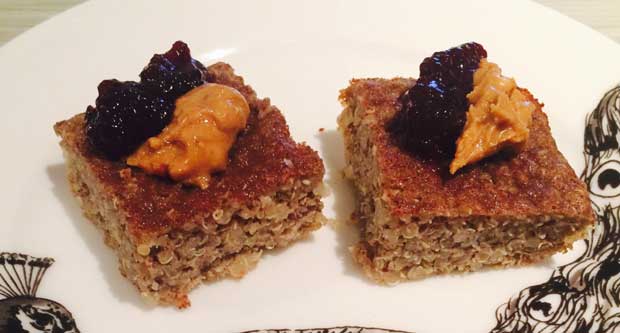 I’ve been trying to find different ways of using regular ingredients. Instead of thinking inside the box and using certain foods in their usual way, there are so many ways to mix it up and use stereotyped dinner foods with breakfast or snacks, or lunches, etc. Why is it that it’s normal to have breakfast foods for dinner, but it’s weird to have dinner items for breakfast? Granted, I don’t wake up in the morning craving spaghetti and meatballs, but maybe it would be a perfect start to my day.

This recipe is another way to use quinoa, one of this century’s “superfoods”. I usually associate it with dinner and lunch, combined in a stir-fry or something of that nature. When I found the recipe for a gluten-free cinnamon quinoa bake, I was intrigued, not because it was gluten-free, but because it used quinoa in a different manner than I was used to.

It’s a protein-packed snack because of the quinoa and egg combination, but it’s also an excellent base to which many other ingredients could be added to enhance the flavour. I followed the recipe minus the maple syrup. They taste great with peanut butter and jam (as seen in the picture) but I’m sure would taste incredible if any number of other additions like nuts, dried fruit or chocolate chips. It’s a simple and quick recipe that has been a great snack after workouts before I get home to refuel with a proper meal. Enjoy.

Cool completely and cut into squares.  Serve with a dollop of nut butter.