My quest to go from Couch-Potato to Kenyan stalled Sunday under a foot of snow and a wallop of ice.

I had registered to run the Burlington, On, Chilly Half Marathon and was hoping, perhaps a bit naively, to squeak out a PB.  My training runs have been strong lately and my running buddies have been exceedingly encouraging. I felt good and thought if I pushed it hard enough I might be able to sub 1:50:00.

Nevertheless, the doubts crept in as I crept over the mound of snow obscuring our driveway. Seemingly seconds later, the gun went off and I found myself navigating a slushy ditch and a crush of runners with less room than a sumo in a Smart Car. 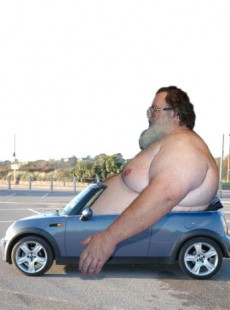 It wasn’t going to be my day. Finding steady footing quickly proved more important than maintaining a reliable pace. By 8km, my toes were mini Titanics sinking into frigid waters with every stride.

Somewhere in there though, instead of getting down on myself like the Becky of old, I refocused: changed my goal. Honestly, I’d by lying if I told you I didn’t curse (profusely) throughout the entire race, but what was different between me now and that Becky is that I considered the conditions, that it wasn’t my target race and I tempered my expectations – “Under 1:55:00 Becky, you can do it.”

Looking back, this wasn’t a case of throwing in the towel, or mailing it in, or any other euphemism you can name. Instead, it was a proactive response (not really an oxymoron) to unexpected conditions. And life is like that, right? Thinking on it, I have compiled a quick list of other times where tempered expectations proved beneficial:

– When I was 14, I thought I’d marry Ethan Hawke. Instead I married a man with a hawk-like brow. He is yet to leave me for the nanny and likes to shower…both improvements on Ethan.
– The younger me wanted five kids: In contrast, two kids and a grateful uterus can also be rewarding.
– In life and in sports, my parents always told me to shoot for the moon. In practice, I’ve found that shooting towards the moon leads to trouble with the authorities.
– Actually giving 110 per cent to an activity can be harmful to your health.

To put it plainly, in the right instance, like on Sunday, compromise just makes life happier. I finished the race in 1:52:58 – Two minutes and 12 seconds behind my PB. My second-best half marathon time ever – done in the worst conditions I’ve experienced.

No self-pity this time – I’ll take it with a smile.

P.S My favourite psych-on-a-bike, Peter Papadogiannis is trying to figure out what makes us marathoners tick. Please help him out by filling out this research survey – it won’t take you longer than 15 minutes and all responses are anonymous.

If you like my blog,  drop me a line and I’ll add you to my mailing list to let you know when updates are on the site. Don’t worry, your e-mail address will be safe with me and my best Nigerian banker friends.