Two weeks ago, my phone lit up with a text: “La Cloche Silhouette Trail Run? Halloween party?” It was one of my running friends.

It took a few exchanges before I realized that he wanted to arrange a “fun run” undertaking the entirety of the 78-kilometre La Cloche Silhouette Trail. The trail is a loop that beginning in the park campground at George Lake in Killarney, Ont. It’s steep, it’s rocky and it’s absolutely stunning. It would take us from the campground through the La Cloche mountain range of quartzite rock. Most people do it in seven to 10 days. He wanted to do it in one.

The week-plus timeline was a recommendation that I saw simply as a suggestion– and one that I was not going to take. I decided not to dwell on the details. I am a yes person when it comes to adventures and this sounded like the best Halloween adventure of all time. I was in.

We invited a few friends, told them to bring comfortable running shoes and costumes. The days whizzed by and it wasn’t long before we were headed towards the campground with anticipation for what lay ahead. Going into the weekend, I had no doubt in my mind that we would complete the trail. From my adventure racing background, I’ve come to decide that completing the course isn’t a choice– failing a severe injury or bike malfunction, of course. When it gets hard or the terrain is tedious, you just slow the pace and keep pushing forward.

“When we arrived at the almost-empty campground, we discovered that not only was it pouring rain, but the campground had also shut the amenities off weeks ago.”

But other members of our group had their doubts, especially when we arrived at the almost-empty campground to discover that not only was it pouring rain, but the campground had also shut the amenities off weeks ago. We would need to fill our water bladders in the lake and we wouldn’t be able to return to a warm shower after our run. But we got down to it anyway. We spent the first rain-soaked night setting up tents and filtering water from the lake to fill our packs and water bottles. This was extra preparation time that we hadn’t banked on which meant that by the time we had all of our running gear, food and water prepped for the next day, it was just a few short hours to our 4:00 a.m. alarm. 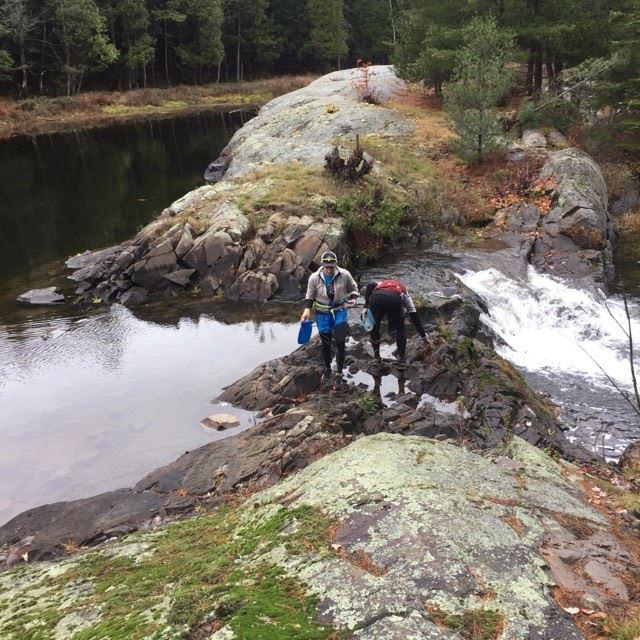 It was relatively easy to get out of bed the next morning though, despite the lack of sleep and misting rain. We were all excited– though, perhaps a bit nervous of what lay ahead. We quickly drank our coffees, ate some warm oatmeal and headed to the trail head.

“Little creatures skittering through the forest, dim lighting and misty rain only added to the atmosphere of our Halloween run.”

We began running at a sustainable pace considering the wet conditions. Everyone was chatting happily, running easily and paying special attention to foot placement on the technical terrain riddled with roots and rocks. This was something we had to watch even more as we were running in complete darkness. Then, I found myself willing the sun to come up after my flashlight burnt out. We still had two hours of running before there would be natural light. My battery had not charged properly the night before. I found myself tucking in behind a runner with the brightest light, carefully picking my way through the trail. Little creatures skittering through the forest, dim lighting and misty rain only added to the atmosphere of our Halloween run. Despite the lack of natural light, I was having a wonderful time.

We crossed a number of bridges and even a beaver dam which required extra care. The light rain was making the leaves, rocks and roots treacherously slippery. We slowed our pace significantly. When  we passed a few clearings, it made me wish that we were travelling in the light of day. This area of Ontario is absolutely stunning, especially with the bright colours of fall. Eventually, the light cracked the horizon and we were moving steadily through a flat portion of the trail, perfectly on pace to finish the loop before sunset.

“We began took off our compression socks and swapped foot horror stories. We stood in the frigid water to decrease inflammation, then brewed a pot of hot coffee before collecting deadwood for a fire.”

As the morning unfolded though, we had had multiple ankle rolls and one of the runners in our party had asked for an ibuprofen for a nagging knee pain. At the 30-kilometre mark, we stopped to assess our options: if we continued at the current pace, we would be doing the most dangerous part of the trail in the dark which didn’t bode well with the combination of injuries among the members of our group. Wet, jagged rocks and ridgelines with limited visibility sounded a little too scary– even for a Halloween adventure. We made the executive decision to turn around and head 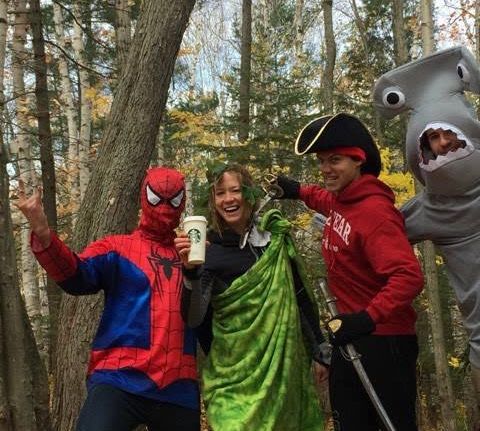 back the way we came.

Once we let go of the challenge to complete the entire loop, we relaxed the pace. The atmosphere changed. I had been excited to tackle the challenge but when presented with the option to skip a dangerous night run and have less distance to recover from, it wasn’t difficult to sway me into heading back. We mostly hiked back the rest of the trail and it was incredible to see the areas that we missed in the darkness. With our relaxed pace and frequent stops to check out the views, the remaining 30 kilometres felt like it took at least double the time. By the early afternoon, we finally arrived back at our campsite. We began took off our compression socks and swapped foot horror stories. We stood in the frigid water to decrease inflammation, then brewed a pot of hot coffee before collecting deadwood for a fire.

In a few hours, we had a roaring fire. We circled around in our costumes and poured beverages and toasted to a day that ended up being a perfect Halloween adventure.