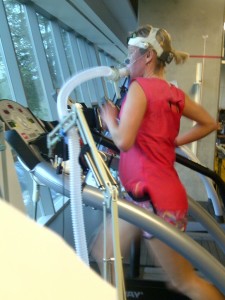 More and more people seem to be hiring personal coaches recently to get more serious about their training, while I on the other hand have gone in the opposite direction. I’ve always preferred to have a coach to rely on for a training program and advice, but being pregnant has changed that for the time being (I’m due June 27). Dave Scott-Thomas and my husband Trent have been the coaches that I’ve relied on for the last nine years and will continue to post-baby. However, for my pregnancy they’ve stepped back to let me make my own decisions and go on “feel.”

But, I realize I’m not really the one making the calls, instead it’s my new coach who we’ve nicknamed “Ricky Bobby” for now. Trent decided since we haven’t settled on a baby name that he’d start naming him after Will Farrell’s character in Talladega Nights. This WILL NOT be his name, but for now it works.

So, “Ricky Bobby” has been writing my training program. Some weeks he’s implied it might be my last week of running because my pelvis and planter have flared up due to his growing need to dominate the space in my belly. I’ve gained about 20 lb. so far and I feel like it’s all in my belly! However, “Ricky Bobby” hasn’t stopped me from running just yet, he just feels better if I mix it up with some pool running and elliptical. Some days he lets me run up to one hour and is quite happy to bob along, sometimes even allowing me to add in some fartlek and hills, as long as I keep my heart rate below my personal anaerobic threshold (180 bpm). Other days, however, he is pretty adamant that I only run 20 or 30 minutes at a time and walk up steep hills (and shows this by kicking and moving around).

Overall, I can’t complain as I’m still very active and able to do an average of 60-90 minutes of aerobic activity a day, which usually includes a mix of running and cross-training, as well as light weights two or three times per week. I’ve had a lot of people ask me how I’m still able to run, or if I’m worried about the amount I’m doing. I actually don’t feel like I’m doing very much compared to what I’m used to (half the amount of running), and feel the best method is to listen to “Ricky Bobby”, not forcing any training. It’s the first time as an elite athlete that I don’t feel guilty for missing a training session.

Although there isn’t a ton of research on elite athletes and pregnancy, the latest pregnancy research does say that moderate exercise is good for mother and baby. My doctor has been completely supportive of my activity level as long as I listen to my body. In fact, since there isn’t a lot of research on elite athletes and pregnancy, Trent and a few colleagues have been doing a case study on me, which has been really interesting because my heart rate and lactate numbers haven’t changed as much as we thought. We’ve been tracking body weight, body composition, basal metabolic rate and lactate levels with heart rates and paces during an easy sub-maximal treadmill test every five to six weeks. We’ll also do this post-pregnancy to see how I’m doing as I return to training. 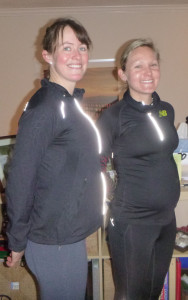 I’ve also enjoying still keeping up (to a point) with my training buddies in Victoria. We usually have a good group meet at our place every Sunday so I at least aim to stay with them for half the run. We even have guest appearances, which this month happened to be our good friends Malindi Elmore and Graham Hood. Malindi and I have spent a good half of the last decade training and racing together across the globe. Now, coincidently, we are due to give birth to our firsts within three days of each other. Another adventure to share!