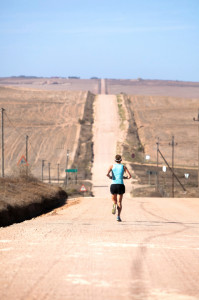 The long run is often the centrepiece of a training week, especially for marathoners. It’s a great aerobic stimulus, and for marathoners and half-marathoners, it can be a race-specific workout, too.

Many runners will complete their long run on Saturday or Sunday, usually because there’s a little more time available to run. They can get all their friends together and then spend the rest of the day relaxing and recovering. That said, in our group, we go long … on Monday nights. And we don’t just do long, slow distance. We mix it up.

The reason we do our long run on Mondays is because I do think it is one of the most important runs of the week, and I want to make sure that everyone is well recovered for it. Saturday is often race day or a workout. If we did our long run on Sunday, we’d be doing two hard days back-to-back. This is not always a bad idea. In marathon training, for example, you can use back-to-back days to get in a depleted run, without having to go as far to see the fat metabolization kick in. But in our case, because we usually want runners rested and fresh for the long run, Sunday is not a great option.

In addition, if we went on Sunday, then came back Monday with intervals or tempo, now we are looking at three hard days in a row, which, even at the highest levels, needs to be a well thought out plan, and certainly not a weekly occurrence. Wednesdays we tend to run faster and I don’t want people feeling banged up after a weekend triple.

So, we do something Saturday — hills or a medium run and tempo in the winter, usually — have Sunday as a nice recovery day, then on Monday we go long. Doing a long run on a weekday evening isn’t such a bad thing: you can do the run after work, get home and eat right away (like you should), and then, since you’ll probably be too tired for much else, just head to bed. If you do a long run on Sunday, sure, you may go out for brunch after, and you may lounge on the couch for the afternoon, but you may also have work to do around the house, and the kids might need entertaining. At least in the evening, you can basically just shut it down.

The other thing we do with long runs is add some kind of up-tempo running to them. Usually it is some kind of threshold work. We start at steady state pace (somewhere between half-marathon and marathon pace) and build from about 20 minutes up to around 45 minutes as part of a 90-minute to two-hour run. Within that steady session, we also add surges, sometimes short three-second bursts, and sometimes longer 15-second accelerations. Eventually we move to “true” threshold — tempo or half-marathon pace — runs. Sometimes we throw in short hill sprints in the middle of those. This aids in muscle fibre recruitment, which can help reduce fatigue during middle-distance and distance races.

For marathoners, specific, goal marathon pace work is a great add-on to a long run. It will teach your body to run at the pace you want it to, and while you’re depleted or depleting, too. You can also practice your fuelling on these runs, which, while not having the same effect as a depleted run, is certainly a key part of your marathon prep.

The long run+tempo is my favourite type of run, and it is a run that can be beneficial for runners training for all distances!