Runners come in all shapes, sizes, abilities and ages. I decided to check in with some female runners about marathoning. I wanted to see if could learn something from these marathon maidens.

I grew up with five sisters, but I learned little about their running. I decided to tap into two runners. One is the Canadian female marathon record holder and the other a top female Canadian masters runner. 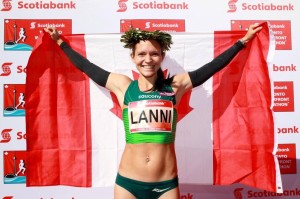 Lanni Marchant is the Canadian marathon record holder (2:28:00), is a London, Ont., native who lives in Georgia, but commutes across the state border into Chattanooga, Tenn., for work. Lanni comes from a family of seven kids (so do I — maybe marathon talent runs in big families?) She recently graduated from law school, making her Canada’s fastest female lawyer.

I caught up with Lanni and asked her about female running.

“Hey Noel. Like I tell most runners, have fun with training and running.”

“For females specifically, don’t get bogged down by how other runners look. Your body is your body and it will naturally change with training. Unique things to consider as a female: time on your legs. Running the same mileage as a dude is going to take you longer, so don’t chase the numbers the guys in your running club might be doing. Time on your legs in the race… I’m 17 minutes slower than our fastest marathon men in Canada… That can mean a lot on a hot race day.”

“Your cycle. Nobody really talks a lot about it, but your cycle can really influence how you feel training and racing. Low energy, water weight, increased appetite, nausea, et cetera. This is why I say your body is your body. You can’t trust the scale to dictate your fitness and you have to remember that once a month you may just not feel yourself. Also, I know some women just naturally skip their cycle when training. Please, do not take this as a good sign or a sign of fitness. If you are fueling correctly your body will thank you for it.”

Denise is an uber fit runner I met in Halifax when I was lived on the East Coast. Denise ran when she was younger and then reappeared on the masters scene later and has become a very strong masters marathoner.

Denise is also a single mom with five kids in the house. She crams in workouts and tough mileage between her kids’ activities. I managed to stop her for a moment and. She told me about what makes running and training as a women different.

“First thing that comes to mind for me, especially since I train with guys, is washroom breaks. This is by far more difficult for women. I know when we are out for our two-hour long runs and nature calls, it’s much easier for the guys to quickly dart and go in the woods and rejoin our little pack of runners. Now, for women, we are stuck with the stop and squat which is difficult and just not efficient. However, I’ve gotten very good at this and have even beaten the guys out of the washroom break at times.

“All right, no getting around this one. The time of the month for sure is an issue for most women. Our cycle definitely affects us woman, and not just during it. A week before your cycle, progesterone levels rise and that increases breathing rate and body temperature also rises, which can make running harder. Some woman have to deal with cramping, fatigue or bloating.”

“Feeling safe when you are out running, I believe, can be more an issue for women. I don’t prefer to run at night unless I’m running with a group, and I feel even more comfortable if there is a man in the group.”

“Ok, that other ‘M’ word: menopause. This is definitely another women’s only running issue that many female runners must have to deal with. Fatigue is a common symptom of menopause and you can probably expect to see a drop in your speed and endurance. Hot flashes during your run can’t be fun and it is recommended you stop and drink some water.”

“An issue for me while training for a marathon is finding female training partners. So, my core group of training partners on long runs and more intense workouts are all guys. Now don’t get me wrong here, I love my training partners, they treat me just like one of the guys and I wouldn’t trade them for anything, but it sure would be nice to add another woman in the mix to talk about some of these women’s running issues.”

There may be differences between men and women – but we are all out there running and it brings us together.

To all my female running friends and to everyone out there: run on.

Do you have a running story or comment for me?

You can also follow me on Twitter at @NoelPaine or learn more about my marathon adventure on my personal blog.