It’s time to start a new motivation to run. Being injured for an extended period has given me time to reflect on what got me into this predicament. I realize and accept that my injury is a result of my own bad decisions, and that I made a multitude of mistakes – too many to list. One paramount error was trying to run through my Achilles injury, but there was something even bigger that happened before I became injured: I was running without a goal. 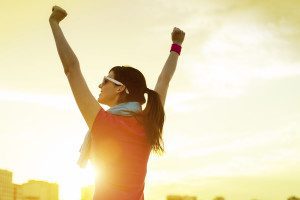 After I set my half-marathon PB two years ago, I was delighted with the results of an aggressive training plan, but running had become my job – I was physically exhausted and felt guilty about the hours spent training, away from my children. As a result, I decided to not set a running goal for 1 year. What a huge mistake. With no goal, my running became sporadic. Some weeks I’d run 40K, the next week 5K and other weeks nothing at all. I didn’t bother with hill repeats or speedwork. Why would I do that? It’s not like I was training for something. What was I thinking (rhetorical question)? With this type of approach, it’s no surprise that I injured my Achilles.

I’ve managed to get a couple runs in over the last few weeks, and luckily my Achilles hasn’t been an issue, but I continue to feel anxious every time I try to start running. My mind and motivation is now my biggest challenge. I used to find running easy. It’s hard to ignore how difficult it is now. I recognize that I’ve fallen out of a routine and my endurance is gone, but I’m surprised at how hard it is to get my mojo back.

For the last couple of years, Sunday morning has been my time to spend on the roads, running with friends. I haven’t been running with the club for months, but today I went back. My running friends started to clap and cheer when I told them I’d be running today. It felt great to be surrounded by people who missed me and who encourage me. They’re my second family. It was a dose of love and support that I needed; their thumbs-up meant more to me than they realize. I promised my running partners that I wouldn’t miss any more Sundays, that I’d start coming back to track workouts and join the club for hill repeats, too.

In October, I turn 40. A large convoy from the club will be travelling to the Prince Edward Island Marathon and we’ll celebrate my birthday. My next goal is to run the PEI 5K with my parents and husband. I’ll be surrounded by the most important people in my life. I’m really looking forward to it, so much that it’s my biggest motivation to start training again.

This afternoon, I’ll create the training plan for the PEI 5K. I’ve decided to set a weekly goal from now until the race, which is to not miss any runs in the training plan. As a mom, wife, friend, businesswoman and community volunteer, I’m constantly juggling a lot of commitments. I need to make running a priority again, I know when I run more regularly that I’ll start feeling stronger and enjoying it, but I’m honestly finding it difficult to make the time.  If it were easier, I know I’d make the time.

In addition to following the training plan, I need to stop thinking about what I used to be – faster. This will likely be my biggest challenge. I don’t plan to set a personal best in PEI. I’ve accepted the fact that PEI is likely going to be the slowest 5K that I’ve ever run, but that’s OK. At least I’m running.

It’s interesting how this injury has changed my perspective on running. Like so many runners, I’ve always measured my running success by personal bests. Now I just want to run, be with my friends and enjoy it again. It’s time for me to embrace my inner turtle and stop being obsessed with pace!