Oh crap, I started training for a marathon and completely forgot about my blog. Let’s get back on that blog train.

Hey, folks. It’s been a while. How in the heck are you? I haven’t written a blog recently. A couple reasons for that. First, nothing really exciting has happened. Second, since only kinda interesting things have been going on, I’ve managed to sum up these happenings in 140 character tweets. I’m kind of addicted to Twitter. The perfect medium for our attention span-deprived society.

It’s been three months since my last blog. I reckon I should have enough content to provide a somewhat informative and entertaining post, but if I run out of content I’ll just make some stuff up. I usually just do that anyways.

Quick recap of stuff; last we talked in mid-February I was getting ready to run the First Half here in Vancouver. I won the race but it was ugly. I only won because Kelly Wiebe took a header after slipping on some mud. Dude bit it so hard! It was kind of funny at the time, and looking back at it now it is straight hilarious. Young blood will be good if he learns to stay on his feet. 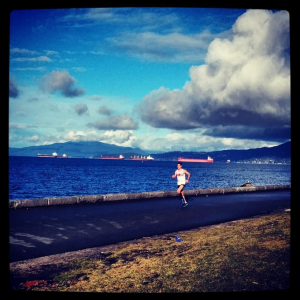 As I said before, that race was pretty ugly and I was slow. Luckily, after that I managed to hunker down and get myself into good shape. I was super stoked heading into the world half-marathon championships in Copenhagen, but five days before I was supposed to fly off to Europe I was stricken down with some god-forsaken illness. I’m pretty sure I almost died. I ended up not leaving my place for, like, a week and had to cancel the trip. That was lame as hell.

When I finally felt ready and able to train again I headed down to Aptos, Calif. for a training camp. It was glorious. That place is rad. While there I tried to catch up on lost fitness. I ran hard and ran a lot. I was rolling again. But here’s a pro tip for you, folks: don’t force the fitness! Train hard but train smart! I was not very smart in Cali. I was forcing it a bit and as a result I put myself in a bit of a hole. I suffered from dead legs for a good 10 days after that trip. I was useless.

So, that’s been my running life since February. I’ve obviously had some ups and downs but thankfully the last few weeks have gone very well and I’ve put in a strong training block. Just in the nick of time, too, because, as it stands right now, I’m only 16 days out from the Ottawa Marathon.

I am excited to get on the line come May 25th. No marathon build will ever be perfect, folks, and I’ve done my best to just ride the wave and do all I can to be ready to compete hard come race day. When all is said and done that is all you can do. Gotta play the hand you are dealt and, come May 25, I’ll just give it all I’ve got. Balls out, my friends. Balls all the damn way out!

I ran Ottawa last year, kind of just on a whim, and had such a fun time doing it. I figured this year I would hit it proper. The Ottawa Race Weekend is special with always a great time to be had.

One thing that really helped me get my stuff together is having Dylan Wykes back and rolling. There’s nothing quite like chasing a 2:10 dude around to get that fitness rolling. Man, I can’t wait until we have Kelly back to full strength as well. I really dig this BCEP group. And how about that friggn’ Bruchet kid?

As a last little test, I did a half-marathon here in Vancouver the other day. Probably the most tired my legs have ever been for a race. In a good way, though — not dead like post-Cali — tired from good, hard, smart work! I managed a fairly controlled 1:06:00 and was stoked about that. Yes, I understand that 1:06:00 is not a particularly fast time, and it’s 2:30 off my PB, and I got thrashed in the race, but for what I’ve gotta get done in Ottawa on May 25th, that 1:06:00 will suffice perfectly!

So about Ottawa, let’s talk about that a bit.

For this race I have been mentoring and coaching a group of runners as they train for the race. It’s a really great group of folk. Jason, Sinead, Christa, Domenic and Mathieu are an awesome, diverse group. They’re all on different levels, yet they are all eager and willing to do the work. Despite a hiccup here and there, they’re all doing great!

I have to admit, I am not always the best coach or mentor. For one thing, it often takes me about three weeks to reply to an email. Anyone out there who’s ever tried to reach me via email, I must apologize for my delayed response. I’m not ignoring you, I’m just a poor communicator and am absurdly absent minded! Hmm. Maybe that’s a reason why I’m single?

Anyways, these guys have been branded “LeTeamDuRob” and are gonna smash that marathon come May 25!

LeTeamDuRob, coming to get ya May 25!

Ok, well, three months and that’s all I got for you. Sorry. Marathon brain is not super conducive for writing great works of literary blogmenship.