I suffered a setback recently in training that caused me to stop half-way through my big goal marathon. I was upset but stayed positive and am looking to address my problems and look for a new challenge. My hurdle is nothing compared to the life-affecting news that Jim Willet got one day a few years ago. 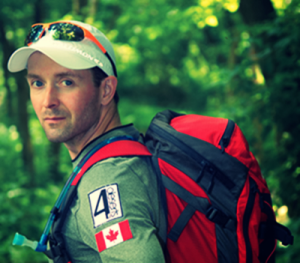 A friend put me on the trail of Jim. I always feel privileged as an average runner and writer to share with others interesting and inspiring running stories.

Jim’s eyes have an air of determination. He has done the Gobi March, the Atacama Crossing and the Kalahari Extreme Marathon, all 250K stage races across their respective deserts. When I was communicating with Jim he was off to Iceland for a two-day race. In September, Jim will be attempting to run the 900K Bruce Trail from end to end.

Doing crazy ultramarathons is a great story in itself but Jim runs for a reason. Jim has a story.

Prior to 2010, Jim had only completed a single half-marathon race. Being diagnosed with colon cancer in early 2010 brought regular life to a halt.

“I was 36, had been an athlete most of my life and thought I’d have lots of time for travel and adventure.”

Nine to ten months of surgeries and chemotherapy followed. Jim began to think about how he wanted to spend his time and what he wanted to do with his life. Jim decided to run from what had changed his life, literally, away, yet towards something.

After starting his running adventures, Jim also started a Facebook page called The Optimism Revolution. It’s grown to over 225,000 fans, where he says he tries to share messages of inspiration, perspective, and positivity.

His bio write-up says that if you ask Jim to describe himself, it’s likely you’ll only get these four words: “I am a runner.”

What are your long-term goals, life and running?

“I live by a pretty simple philosophy these days. I try to be a better person when I go to bed at night than the one that woke up in the morning. There are steps we can do everyday that will take us closer to our goals, and to try and make a difference. They don’t have to be big steps. We just have to be willing to make them.”

What kind of ultramarathon draws your attention, what kind of running challenge do you like?

“I love any race that’s long enough to make a connection. A connection with other people and with the environment you’re in.”

What do you hope followers and other runners get form your story?

“Running teaches us so much about ourselves and about life. I just hope I can convey those messages to people. Let’s face it, we’re all afraid of various things — fear is a big part of being human — but if we can summon up enough courage to face a fear, then it’s a brand new day and the possibilities are infinite.”

Jim describes himself on his website and blog as a cancer warrior, optimist and adventurist. I just think he’s inspiring. Not everyone can come from a life-shattering event to being so positive and committed to making a difference and doing what you want to do, despite hurdles.

Do you have a running story to tell?
runningwriter@hotmail.com