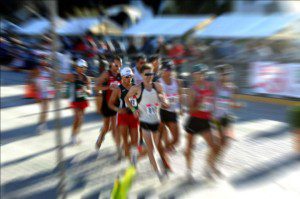 Let’s just get right to the point here; Damian Warner. Damian Friggen Warner! Nicest, humblest and most badass dude on the team scores a bronze for Canada. That was exciting man, Friggen right. I’m calling it right now, there will be a movie made about Damian, his story is just too awesome.

Damian’s performance capped off a fairly successful day for team Canada here in ‘Cow city. Along with Damian throwing down.. .and jumping up… and runnin’ speedily, we had two-thirds of the women qualify for the next round of the 1500m, and we also had some very nice results in the race walk. Now hold up now, hear me out: I know that race walking is a sport in which people like to rag on and make fun of. I’ll admit it is kinda silly. It’s kinda funny looking seeing all those folks scooting around out there. But the fact remains, out off all the scooters out there in the world Canada has some of the best! And here’s another fact, the race walkers are very cool people. My roommate on this trip is a race walker, his name is Ben, he’s a cool dude and he came 20th place in the world. I’m proud of Young Buck Ben. Shout out to Inaki Gomez to walking to an 8th place finish, he was awesome. Haters gonna hate, but I’m a converted fan, race walking is cool, so shut up. Aside from some solid track action I too had myself a pretty good day. I went on one of the coolest runs I have ever been on this afternoon. I have always held the belief that the best way of seeing a city is by running the streets and checking things out that way. Here in Moscow, there are these massive buildings known as the “Seven Sisters.” They are these huge ass buildings built in what is known as “Stalinist” style architecture. These buildings are beautiful. One of these Seven Sisters is the main building of Moscow State University. Today was the last day that I could actually get in a real run before I taper the hell outta myself, so I decided to jog up to this building. That University up there was so cool! The building itself was is very imposing and strong, but at the same time the detail and intricacies are very beautiful. The views of the city from up on that hill were gnarly also. I dug it man, such a cool run.

Fun Fact; One of the Seven Sisters was the Ukrania Hotel. It is another one of these massive, imposing and spectacular buildings. But since the fall of the USSR, it has been transformed…into a Radisson…score one for Western capitalism.

Off to the track to check out some Steeplechase tomorrow morning! We have three dudes locked, loaded and ready to rock this sucker. Can’t wait. It’s nice to have some top notch track to watch because I’m in full on taper mode now, no more long runs, no more ball-busting workouts. Now I rest and get my legs under me. Cool beans.