Last night at the world championships was the most fun I have ever had at a track meet. Holy moly folks, what great energy!

Derek Drouin. What a friggen champ! Bronze medal for the man from Chemical Valley. I like the cut of this man’s jib. The high jump is a crazy deep event at the top level. There are a handful of guys capable of winning on any given day. It all comes down to who is feeling the most peppy, and who can handle the pressure.

After hanging out with Derek a bit this week, I got the sense that this dude is cool as a cucumber. Derek doesn’t get rattled, he handles himself like a pro and performs like a boss when it matters. He was the bee’s knees out there last night. With each clearance he had me sky-punching the hell out of the Moscow night; I was whooping it up like a gosh-darn madman.

As if the excitement of the high jump wasn’t enough. Just as Derek was out there firing on all cylinders, the steeplechase crew rolled on out to take to the track for their final. I was nearing over-stimulation, and had to sit down and take a deep breath. For the first time ever, Canada had two horses in this race. 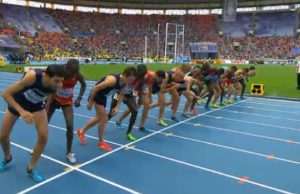 After all that drama of Monday, our boy Alex Genest was composed and ready to rock. Matty Hughes had been hitting on all sixes this year and was on the verge of of doing something special. This was guaranteed to be a rip-roaring affair. The gun goes off and for the next 8 minutes and some odd seconds, I was in track fan heaven.

The race played out as a pretty standard championship race. The first 1000m was fairly conservative, quick enough to make people work, but not so much as to drop anyone. Things stayed steady in the second kilometre as the pack started to string out a bit off the back, but the main players remained firmly planted up front.

As the race was nearing its climax, the tension was building, the athletes were sizing each other up and it was just a matter of time before someone would make the decisive move. With 800m to go, one of the runners could no longer hold back. Bang! just like the hammer had been dropped, the pace got damn sexy and the race for the medals was on. When the dust settled, it was a familiar scene up front as  Ezekiel Kemboi took yet another world title. That man is the GOAT in the steeple as far as I’m concerned.

But just a few seconds behind, there was a very unfamiliar scene unfolding. Oshawa, Ont.’s finest Matt Hughes was having himself an absolute gem of a race. He was tearing down the homestretch and was on pace to make some history. Matt crossed the line as the clock hit 8:11. Homeboy had just set a Canadian record as he placed a tremendously respectable 6th place. Alex came across in 13th place at 8:27, he fought like a champ out there. That steeple crew, man – great stuff!

Literally 2 minutes after the steeple ended Derek Drouin stepped up and soared over 2.38 metres to set a new Canadian record. That was it for me – two national records in 2 minutes. It couldn’t get much better than that. I was getting way to excited, I had to go home and go to bed.

Yet another splendid evening in Moscow for the Canadian track and field team. Three medals so far and we still have some top-notch talent yet to go. The athletes here are rocking – kudos to them. Also have to give a huge shout out the the support crew. Be it the individual coaches for prepping their athletes to be battle-ready, the Athletics Canada medical staff keeping us all healthy, happy and in fighting form,  or the administrative team members who are constantly on top of every detail so we as athletes have nothing to worry about except competing. This is a full team effort with a singular aim towards excellence. Good stuff, team AC!

Love ya and miss ya Canada.