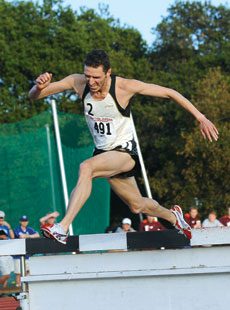 Just got back from the track after watching some steeplechase action. It was bound to be an entertaining day. This was the first time that Canada had three representatives in the steeplechase — we had a dude in each heat. We were expecting some drama and high emotion, but oh man, we got that and so much more!

Things started off nicely with Matt Hughes absolutely killing it. He ran a brilliant race, finishing 2nd in his heat to auto-qualify for the final. That dude is silly fit.

Alex Genest was up next in heat two. His race was out at a much slower and conservative pace.

When it comes to the heats, there are always the auto qualifiers and then the time qualifiers. Steeple was three per heat auto, plus the next six fastest times. The first heat sets the bar, and it is up to the next sections to better the times. The ideal situation is to be in the last heat because then ya know exactly what you have to do to qualify.

So the second heat starts at a jog. They were eight seconds slower at the 1,000m, 14 seconds slower at 2,000m. This was shaping up to be a race where only the three autos would move on and everyone else would probably be too slow. But then, with 1,000m to go, bam! They took the eff off! A group immediately separated themselves, Alex threw in the hooks and rode that wave. 800m to go and they were absolutely flying, folks, but it still looked as though only the first three would move on. Then boom, they accelerated again! These bastards were looking like gosh darn sprint hurdlers at this point. Alex was right in the thick of it.

After some quick calculations and comparisons between the first two heats it turned out that despite placing 5th in the heat, Alex was sitting as the 5th time qualifier and still had a chance for the final.

This years Worlds is Alex’s 3rd major championship. He had a rough go in Dageu in 2011, and also failed to make the final at the London Olympics 2012. It is always awesome to qualify for these big events, but just being here gets old. There comes a point where ya gotta start performing and getting results. Alex had reached this point, being here was nice and all, but his eyes were on that final.

The third heat was nerve wracking. We had Chris Winter racing. Chris has had a brilliant season and he was more than capable of making his own run for the finals. We were also keeping a keen eye on the time to see if Alex’s 8:24 would hold up for the final. The tempo was solid, but not rolling from the gun. Chris settled in nicely. This was Chris’ first major games. He looked like a seasoned vet out there. He put himself in good position and covered the moves well. He ended up finishing 9th in his heat with a solid 8:29. Not enough to move on, but still a very nice run.

Up front in the third heat the guys stayed smooth and steady through 2000m — the last 1,000m would decide Alex’s fate. Fifth place needed to be slower than 8:24. With two laps to go, the Kenyans made a big move, three guys covered. The top 5 separated themselves, they were hovering right around that 8:24 pace.

Now I know it is not very cool to cheer against others, but we couldn’t help it, one of these five guys had to falter! With 300m to go, the top 5 were all under 8:24 pace, but the Polish guy was starting to break. Slowly but surly, Poland broke, and as they passed the line DST and I were hooping and hollering because our boy Alex had survived, his 8:24 would hold up! He was on to the final!

There was a whole lotta hugs and high fives back at the cool-down track. Alex was on cloud nine and everyone was so stoked for him. Alex is just one of those guys that you cannot help but cheer for. He is one of the nicest, most genuine guys in the game.

Alex, Chris, DST and myself went for a little cool down and life was good, man. Then we got back to the track…

We were met at the track by a stern and serious looking physio. Just 25 minutes earlier, she had been in on our little love fest; something was clearly wrong. She broke the news to Alex and DST. Alex had been DQ’d. Hearts sunk. What had happened? Why was Alex DQ’d? The details were sketchy, there were no concrete answers. Alex was clearly rattled, but he put on a very brave face. He must have been dying on the inside, but he wouldn’t let it show. Dave first calmed his athlete and then went in search of answers. Slowly but surely, we got more information on the situation. Apparently Alex had stepped inside a line coming out of the water pit and he was flagged by a judge. The Athletics Canada brain trust immediately started to work on their appeal.

You gotta understand here folks, most the time when these DQ’s are announced they are set in stone and very hard to overturn. We were all absolutely gutted for Alex. Dude had raced way too well for him to be robbed of the final based on one misstep.

It had been over 90 minutes since the DQ had been announced and we were back at the hotel having a rather somber lunch of salad and chicken. Usually the longer these types of situations take to be resolved, the bleaker the outcome appears to be. Alex got up to get some soup. Chris and I had a moment to chat, we spoke of how bad we felt for our good buddy. It was so unfair, so sad.

Alex came back to the table. Huge smile on his face. “I’m back in!” he joyously exclaimed, “appeal accepted!”

Another round of hugs and cheers were had by all.

Amazing race by Alex, and an amazing job by the Athletics Canada crew to support their athlete.

What a friggen morning man. Time for a nap.