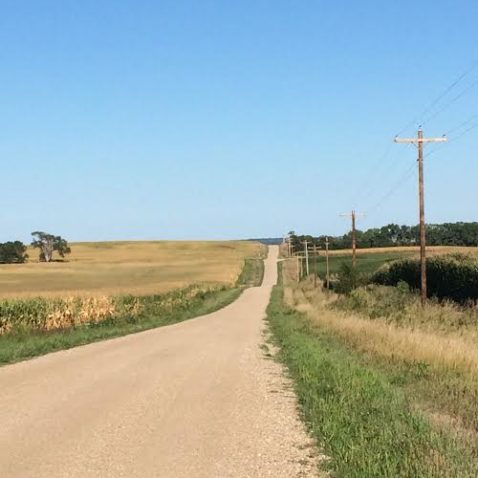 I looked up at the soft, tanned strip of dirt and gravel ahead, bordered by crops of gold, marked by no end and I was home.

I knew this road without having ever stepped foot on it. This was a prairie road: an unmistakable path to freedom. The place where, as a restless 14-year-old, I traversed the flat grids surrounding Wilcox, Sask. dreaming of what was to come. And, the place where as an adult, I found my stride just beyond the city limits of Saskatoon.

RELATED: On the move in all the right ways

This road before me, though far from the northern prairies, was already locked in my mind. These ragged prairie roads always will be.

Since arriving in Nebraska, my feet have tread on lots of concrete paths that are void of the mystery so often found on the long stretches of open land away from where our cities lay tucked aside and forgotten. On this path now, my feet land on the uneven gravel and my eyes firmly point ahead at the miles to go.

This particular road sits far north of Omaha, in a place best described as cottage country. I also know this area as the spectacular home of my mother-in-law, with its wide-open views of Lewis and Clark Lake, towering bluffs reflecting the prairie sun and a calm in the air that only nature possesses the power to bestow. With the lake on one side and farmlands on the other, this cluster of homes sits among lush, reaching trees and winding, steep roads. In mornings, the quiet beauty leaves only room for sounds of rustling critters, and my four-legged friend’s feet tapping along beside mine.

When I run on this gravel road in the afternoon, it’s hitting 90 C Fahrenheit and the open road leaves no shade for reprieve. As I look down the pike, the not so subtle rolling hills pop up against the flat blue sky. And in that moment, I know that as any prairie run should be, it’s going to be challenging. Therein lies the beauty of running on the prairies: it’s never easy. Whether it’s a tempo workout, or a simple recovery run, the pace doesn’t matter– these roads will always teach you something in all that lies in the space between runner and destination.

At times, it seems these roads, obviously laid for functional use, were placed here for runners. It’s as if the universe is conspiring to give those who desire it a place to run free. It’s where inhibitions get swept away by unrelenting winds. There are no limits on these dirty, gravel runways: it’s simply the runner, the road, and the desire to never stop imagining the places you may go.