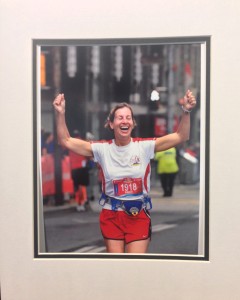 I have run several half-marathons but only one marathon. The training was hard but necessary when preparing to run for 42K. I remember getting up at 5 a.m. so I could run before it got too hot. I ran through North Toronto, North York, Scarborough and the Beaches. I trained for three months and felt strong at the end of each run.

On the day of the race, my mother-in-law dropped me off at the starting line. The race started at 7 a.m. The first 18K flew by. When I got to the halfway mark the race split: those running the half-marathon turned and ran north on Bay while those running the marathon continued on Lakeshore to the Leslie Street Spit. The crowd continuing onto the Leslie Street Spit was considerably smaller than the crowd turning up Bay.

Being surrounded by 10,000 runners added momentum to race. The dynamic changed considerably. In response, I struck up a conversation with the fellow running beside me. He was a mortician from the Maritimes. It was his first marathon as well. I joked that I hoped I wouldn’t need his services after the race. I then told him the only other politician/mortician joke I know:

“Do you know why, in Toronto, we bury our politicians in nine-foot-deep graves? Because, deep down, we really like them!”

We couldn’t manage a laugh because we were at about kilometre 28 at this point. We separated shortly after, as he wanted to finish with a more aggressive time than I could manage. By this time, the marathon route was at the Beaches and the crowd was out in force to cheer on the runners. It was an incredible display of spirit, both for the runners and the members of the community. My kids were also charting my journey and met me at various spots along the route to cheer me on.

When I crossed the finish line at 11:30 a.m. I felt like a champion. There were so many people at the finish line it provided me with that extra little bit of adrenaline to carry me. It is truly an amazing experience to be running through the City’s neighbourhoods, being cheered on by total strangers and completing a marathon.

After four weeks on the campaign trail, there are many themes that are the same. Being a City Councillor taught me how Toronto works and how to work with other councillors; running for Mayor has ups and downs but the people that I have met along the journey have been incredible. October 27 will be the finish line and if the next eight months are anything like the last four, I have already won.