Jean-Paul Bedard is a veteran of over 100 marathons and ultramarathons, including a publicized double running of the Boston Marathon. He is also an author, blogger, public speaker and advocate for survivors of sexual assault. He openly talks about struggling with a past of addiction.

Running started about two years into Jean-Paul’s sobriety when he met two other men training for the Toronto Waterfront Marathon at an AA meeting. 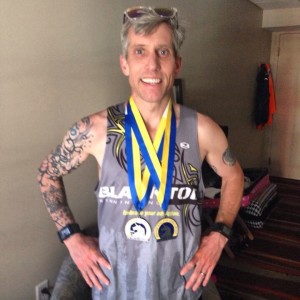 In 2014, Jean-Paul ran his double Boston Marathon, running the 42.2K course twice in the same day to raise awareness for survivors of child sexual abuse. He raised over $25,000 for the Gatehouse Treatment Centre in Toronto.

In October of this year, Jean-Paul will attempt a triple Toronto Waterfront Marathon, nearly 127K in one day to raise awareness for the #BeenRapedNeverReported” campaign.

What drives you to be so open and share your life’s story?

I now believe the most toxic substance on our planet is shame, and for years I lived on a diet rich in shame. It was only when I began openly talking about the sexual abuse in my past and my subsequent struggles with addiction that I began to flush that shame from my system. The more I openly share about my story, the more incredible people I invite into my life.

What is it that running has done to help you deal with your past and future?

Running for me is the perfect metaphor for life in general. There’s nothing between you and the road or trail. As in life, running only asks that you keep putting one foot in front of the other. Sometimes you’re moving along nice and easy but other times you get into some tough terrain. Running permits you the space to run away from your problems, but all the while what you’re really doing is running towards yourself.

How are you preparing for your 127K Toronto marathon in October?

I am currently preparing for a 100-miler in May, so I hope to maintain my endurance throughout the summer and into the fall. Training for an ultra is quite similar to training for a marathon with one exception, instead of one long run each week, you have back-to-back long runs every week. Right now I’m running 50-65K on Sunday, followed by a 25-30K run on Monday. Nutrition is critical, so I’m playing with what food works best on my long runs.

You can find out more about Jean-Paul and his forthcoming book about building resiliency and overcoming adversity on his website superior2circumstance.com and you might want to join the other 375,000 subscribers to his blog breathethroughthis.com

You can also find me on Twitter @NoelPaine or on my personal blog.