Little bit of a slow day on the track today, just a morning session with the afternoon off. Canada did have Evan Dunfee out there in the 50K racewalk. The 50K race walk is silly, just silly. I’ve done one 50K run in my life. I just wanted to see what it felt like … it felt terrible. Took me 3:09 and then I slept the rest of the day and sucked for the next week. I’ll never do it again. Having our man walk that distance in under 4 hours is just mind-blowing to me. It re-affirms my earlier sentiment, race walkers are hard, man. Don’t let the wigglely-ness of their strides fool you – them boys are tough! Great job, Evan. 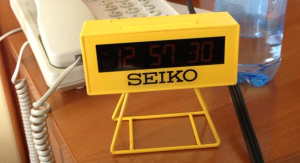 So that there is my competition update. Let’s talk a bit about schwag now. The coolest thing I have managed to get my hands on here is a little yellow alarm clock. This alarm clock is rad because It looks exactly like the official timimg clock, but it has been shrunken down into a tiny little personal alarm clock, it is adorable! Such a cool souvenir for a big ole’ track nerd like myself.
It wasn’t easy to land this clock though, folks. These little suckers are in high demand, and they are exclusive. They only sell 15 each day. To score one of these guys ya gotta go to the official Seiko store at the stadium, and you have to get there early. The store opens at 8:15, but by then the line up is huge and all the clocks are spoken for. I jogged over in the morning and got there at 7:40. There was already a mass of people gathered and I just managed to score a ticket that would allow me to buy one of these precious alarm clocks.

Man, you shoulda seen how grumpy people got once they found out that the clocks were sold out – damn near riots! I saw a 60-year-old Russian man just ripping into a sales clerk because she would  not sell him a clock. Now ya gotta realize something here: this dude was old, he was around through that whole communist era, he has probably lived through some shit. The wall fell less than 25 years ago, and here is this dude freaking out about not being able to spend his rubles on a little yellow clock! Capitalism win!

In other schwag news, a group of the competing Team New Balance athletes were taken to the NB store at the local mall and graciously allowed to grab some gear. Such a nice gesture from my awesome sponsor. I was pumped. I friggen love shoes, man – can’t get enough of them. Huge bonus that NB makes some really beautiful casual kicks. I grabbed a sweet pair of boots and pair of classics. I had such a big ole’ shoe boner all afternoon.

Whilst at the NB store I also picked up a nice hoodie. I’ll let ya in on a little secret: It’s a women’s hoodie.

While I was trying it on, the saleswomen came over to me and said in broken english; “You know this for women?”

I responded: “Yeah, but I can totally pull it off right?”

She looked confused, the simply shrugged her shoulders and passively mumbled “OK,” and then wandered off. I don’t think she was impressed.

One thing that stood out to me about the trip to the mall was the actual mall itself. This mall looked identical to any mall I have ever been in. I don’t know what I was expecting, but there was Gap, Starbucks, Banana Republic and so forth and so on. I was expecting maybe more of that Cold War vibe? Nope, not at all. Capitalism win!

I have travelled to a lot of places in my day, folks, and with most places I either have a good idea what I am going to get, or it is a new place that I approach with an open mind. Moscow has been different. I have always had this idea in my head of how things in Russia would be. I blame Hollywood and selective media for this (maybe a little of my own ignorance), but I envisioned Moscow as this cold, hard place with nondescript grey buildings, stoic, bland people and a general overall bleakness. Over the course of this trip I have been  pleasantly surprised to be proven wrong time and time again. I have found this to be a beautiful city, the architecture is brilliant, the people are friendly and helpful, and it’s physical landscape is very pleasant. Not gonna lie, Moscow is awesome!

So there are my thoughts on the day. Should be a brilliant day. We have our steeple boys hitting that final and also our Olympic bronze medal high jumper Derek Drouin jumping for the medals once again. Exciting stuff!

Oh yeah, and only a few more sleeps ’til this kid gets going!