Ah, the Christmas time! The jingle of bells, the omnipresent Christmas music in stores, restaurants and on the radio. Plus, of course, the food! Drink too! So – are you ready? Have you made a plan, sworn on your running soul and pledged a new year’s resolution already?

It’s the most difficult time of the year to be a runner. We are severely tempted from every angle – food, friends, drinks, parties, relatives, all conspiring against our waistlines and our fitness. As if the season itself wasn’t demotivating enough, now we have to fight the temptations and try to sneak a run in the busy schedule of celebrations and overeating. How many times have you been asked by a friend or a spouse to skip the run and stay in? How many times have you told yourself to skip the run and stay in? I know, it’s such an easy decision to make and then make again the next day and the one after. Before you know it, it’s been two weeks, maybe even three, since the last run. But, how is a mere mortal to resist all this glitz, glamour and “merry-ment”?

Actually, there is a way! According to Popsugar Fitness, now is the best time to start streaking. No, I don’t mean you should strip naked and run outside in the snow in a clear view of the whole gathered family! I am talking about a running streak. 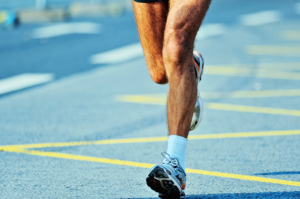 Running streaks are an increasingly popular way to boost motivation, with runners commiting to streaking as a New Year’s resolution. The United States Running Streak Association – yes, there really is such an organization – currently has 463 registered runners with streaks lasting at least a year, or more. They expect the uptick in the number of streakers around the holidays. Chad Silker, a runner whose streak lasts five years, three months and counting, told PopSugar: “When the weather is crummy or I’m in a funk, the streak is enough to motivate me to get back out there.” So, when you’re in the funk, maintaining a streak could be the thing to nudge you out the door.

While the experts don’t deny the immense motivational value of running streaks, they warn about the danger of injuries due to overuse. Every training plan has rest days incorporated, even the world greatest marathoners take a day off at least once every two weeks. If you’ve decided to embark on a running streak, make sure to incorporate “rest days” in it. Jason Fitzgerald, a USA Track & Field-certified coach, explains that, to enjoy the maximum benefits of rest and recovery while maintaining your streak, the “rest day” run should be minimal, no longer than a couple of kilometers, at slow, relaxed pace.

Here are some tips for safe streaking: