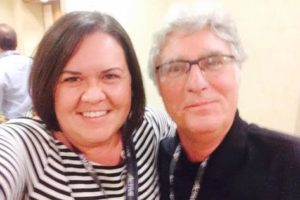 Alan Brookes is a race director, industry legend and owns Canada Running Series. Many people know Alan as a strategic and successful business man, but what many don’t know is that he’s also generous and helpful to his peers.

Two years ago, I was fortunate to have a one-on-one meeting with Alan. As a newbie race-director from the East Coast, my race weekend was tiny compared to the events that he organizes across Canada.

I considered my meeting with Alan a once in a lifetime opportunity to learn from the best. I prepared a list and drilled Alan with questions about planning and staffing as well as the bigger challenges like street closures. He was forthcoming with information and gave great advice. I really appreciate that Alan made time for me and I admire him.

Last year, I met someone as equally impressive at a race director conference: Alan’s daughter Charlotte Brookes. Maritime Race Weekend is a family-organized event and I was thrilled to discover that behind the scenes of Canada Running Series was a dynamic father-daughter duo. Charlotte and I hit it off right away – I learned so much from her when we presenting together at the conference and we’ve stayed in contact ever since.

Canada Running Series has invited me to go behind the scenes and see how they organize an event. As luck should have it, I’m in Toronto with my other job at the same time as their Waterfront 10K in June. I’m pumped beyond words to shadow Charlotte, because she’s charismatic, intelligent, experienced and extremely organized. I know that I’ll see ideas on how to improve Maritime Race Weekend.