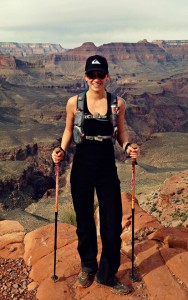 Last weekend I did my last key workout before the Boston Marathon and the entire point of it was to simulate the race. I was intending on doing it on Sunday as I was moving on Saturday but plans were sidelined and I ended up doing my run Saturday morning, a day after drinking more coffee than water, not eating enough carbs and being on my feet all day. Not an ideal preparation by anyone’s standards.

Adding insult to injury, I had given myself zero time to mentally wrap my mind around the fact that I was going to be grinding it out solo for three hours on a hilly route, and on the windiest day of the weekend.

I woke up, ate the same breakfast I am planning on eating for the race and collected my hydration pack which I planned to run with to add more weight. Except I couldn’t find the top to hold it in place. Wanting to move on with my day, I decided a bull clip would be sufficient to hold it in place and I set out.

The first three kilometres were nice and easy but, as I turned a corner into the wind and prepared to start the hill climbs, my hydration pack released the top and doused me in slushy sports water. Despite my freezing backside, I pressed on until I had completed the first segment and turned around to change into warm clothes and grab a functioning hydration belt.

The second part of the run went much smoother, considering the mishaps in the first portion of the training. The wind was still whipping and the hills were still there but my sports drink was remaining in my hydration belt and I chalked that up to a win. It’s all about perspective.

I was able to execute the full run with fairly even splits and was pleasantly surprised with how much life my legs had as I finished my final kilometre.

I like to try to be fully prepared for every workout and race I do. I like for things to go smoothly. But the problem is, sometimes you are stuck charging up a hill, low on glycogen stores with a frozen backside instead of doing the poster-perfect run you had envisioned. I love race simulation runs because they teach you to be adaptable and ready for almost anything.

Even though my long run was far from perfect, it further prepared me for the unexpected on race day and that is one of the things that is even more important to me than building a mileage base. In two weeks, I will be lining up to race my first marathon of 2015. You better believe I am leaving the hydration pack behind.

You can find me on twitter @lacesandlattes and my personal blog.