American Olympian PattiSue Plummer tells her high school girls cross-country and track teams to remember “we are racers, not runners.” There is so much interesting about this idea, and also so much anxiety and hype over racing, that I want to unpack this weird thing we do called racing. Why do we race?

The first thing to think about is that everyone comes to running with a different agenda. Some are racers and they know it from the start. Others might start out with a different goal, perhaps of losing weight or getting healthy, but get pulled into the racing scene later on. This is where some tension can arise, as we do enter races, but we’re really not sure what to make of them. Expectations can be too high or too low, and this can result in a negative experience at the race. For many people, it is a blast, even if we do go through some pre-race nerves. So, despite our different approaches to running, it seems many end up racing at some point. My goal here is to examine racing more closely, as we assume a lot about the purpose of a race and what we hope to get out of it. Sometimes, the two are not in line, and this can cause stress.

There are several different kinds of race. I’ll go over them and note that each one has its peculiarities. There are also a few different “events” that include running, such as various race series named after classical heroes and what not, but I’ll exclude them because that’s a different sport, to be honest. The main types of racing are track, road and cross-country/trail/mountain running. 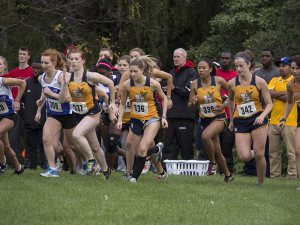 Track is the easiest to describe and nail down. The track doesn’t lie. Notwithstanding weather, you will run exactly 5000m (or as close as you are going to get) or 1500m or 10000m, so you’ll know exactly what you can do in those conditions. Some find the track easier: more frequent reference points as you pass the start/finish each 400m lap, all your competitors are within sight at all times and sometimes there are even people in the stands! Some find the repetitive elements more difficult and strain to keep their focus. Either way, a track race can be a very useful measuring stick, though at a certain level, it may be difficult to find good competition.

Track is the pure form of our sport–the Olympic disciplines lay there, save one: the marathon. And so on the road, we also compete in various race distances. While it may be hard to find someone to race on the track at a given fitness level, you’ll always have someone to run with on the roads. One of the reasons for this is road races don’t (usually) divide men and women, so a faster woman who can run under 20 minutes over 5K will find lots of competition with some men who are also around that mark. There are various distances to try: 5K, 10K, 15K, half-marathon, 30K, marathon (please, no one say full-marathon: it’s just a marathon). The reference points in road racing are usually further apart. You’re given markers every kilometre or mile, and sometimes a marker for 400m or 500m in the last part of the race. This can be helpful for those who worry about splits: you can focus on something else, and not stress out. Being off one second over 400m or 3 seconds each kilometre is pretty similar, but 3 seconds each kilometre seems more manageable in terms of making that time back up in a race, especially when the seconds start to pile up each lap on the track. 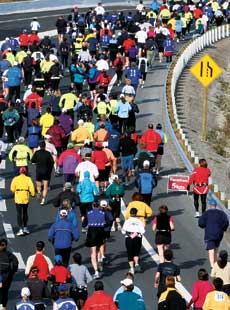 final racing mode is “au naturel.” That is, cross-country, trail or mountain racing. These are all somewhat different, but the idea is the same: get off the road and onto some soft, natural surfaces with some hills. The distances are sometimes defined, as in championship cross-country races, but even then, courses vary so much that a 10K xc time becomes meaningless. Therein lies both the attraction (for some) and the repulsion (for others). You might run a 6.3K cross-country or trail race in 26min. What the heck does that mean? Not much, to a calculator. The challenge here is either to beat the course, with all its mud and hills, or to beat the others in the race. In this way, it is the pure footrace; first to the tree on the other side of the hill through the river wins! Mountain running has some specific rules, but it’s largely the same idea, only up (and sometimes down) a mountain. Trail running probably differs from cross-country in that cross-country is more of a school event, on grass, with prescribed distances, while trail races could be anything, even though the names would suggest it would be the other way around.

So this is what we mean by racing: getting out to one of these events, and giving it a go. The next question we want to ask is: why? Why would you do this? We’ll talk about that next week!