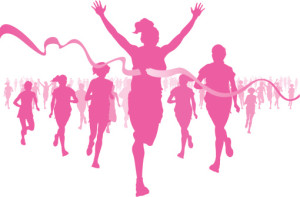 When Katherine Switzer broke both the rules and a significant barrier by racing the Boston Marathon in 1967, she opened up a new world of possibility for women in sport.  Forty-five years later, this hard-fought right for women to race has not only led to an explosion of interest in the sport but also resulted in something that Switzer no doubt did not envision —  the right for women to wear a tiara in the gender exclusive Disney Princess Run in 2013; an event that unlike Boston has little to do with crossing the finish line.

Exclusive women’s events, races, running groups and fitness clubs of course aren’t anything new. But a recent trend within these gender exclusive events has been to relegate results and competition to the periphery, or to remove them altogether. Should this new direction in women’s only events be considered a progressive step or an impediment to serious female runners and a denigration of the sport in general?

The Shoppers Drug Mart Run for Women series is a good example of this growing trend. They host races in Unionville, Vancouver, Halifax, Calgary, Ottawa, and Quebec City. According to Race Director Sara Sterling, more are on the way.

“We are growing it to six cities this year with the hopes of growing to more in 2014. The women who came last year are back again and we are getting requests from across the country to bring the event to their cities,” says Sterling.

The Shopper’s Run for Women does offer prizes for winning, which include Foxy Original necklaces and Running Room gift certificates, but the decided emphasis remains focused on what has become a common understanding in the sport — results don’t matter.

Even the New York City Mini 10K, a race that was started in part by Switzer, stresses broad participation over achievement and if there is a common ground among these events it is found in this heavy weighting of fun and involvement at the expense of competition.

“The Run for Women is a chance for women to enjoy their girlfriends as they would for a girl’s night out or a girl’s weekend. We all know why friends are important. Just like a women’s hockey or soccer outing, running is a social escape that is an important component to a healthy balance in your life”, states Sterling.

But is hosting a serious competition, while maintaining a fun atmosphere necessarily mutually exclusive?  It’s possible that conflating an easy jog among girlfriends with a race may be undermining a small but influential contingent of women who seek to compete.

Sharlene Cobain, a 2:54 marathoner, disagrees, noting both the competitive times and popularity of these events.

“I have noticed that some competitive women’s times come out of the events, so they are drawing competitive women. I don’t see there being any drawbacks, and the participation rates show that many women enjoy them”, says Cobain.

Inevitably, for Cobain, however, it’s about getting faster and women’s-only races contain no special significance to her.

“There are plenty of races for women to run with men that provide competitive, fast courses. I have never considered my running in a gender exclusive way. I train 100 per cent with guys and don’t feel at a disadvantage for being a woman,” states Cobain.

If anything, the arrival of Colour Me Rad, The Zombie Run and obstacle racing indicate that there continues to be a growing appetite for events that put a premium on completion and race day experience rather than timing and results.

For Cobain, race day experience is evaluated by how fast she is able to cover the distance.

And for women of Cobain’s calibre, who regularly benefit from training and racing with and against men, women’s exclusive events may not push running in the same direction as she’s headed but remain more or less a harmless part of the running ecosystem.