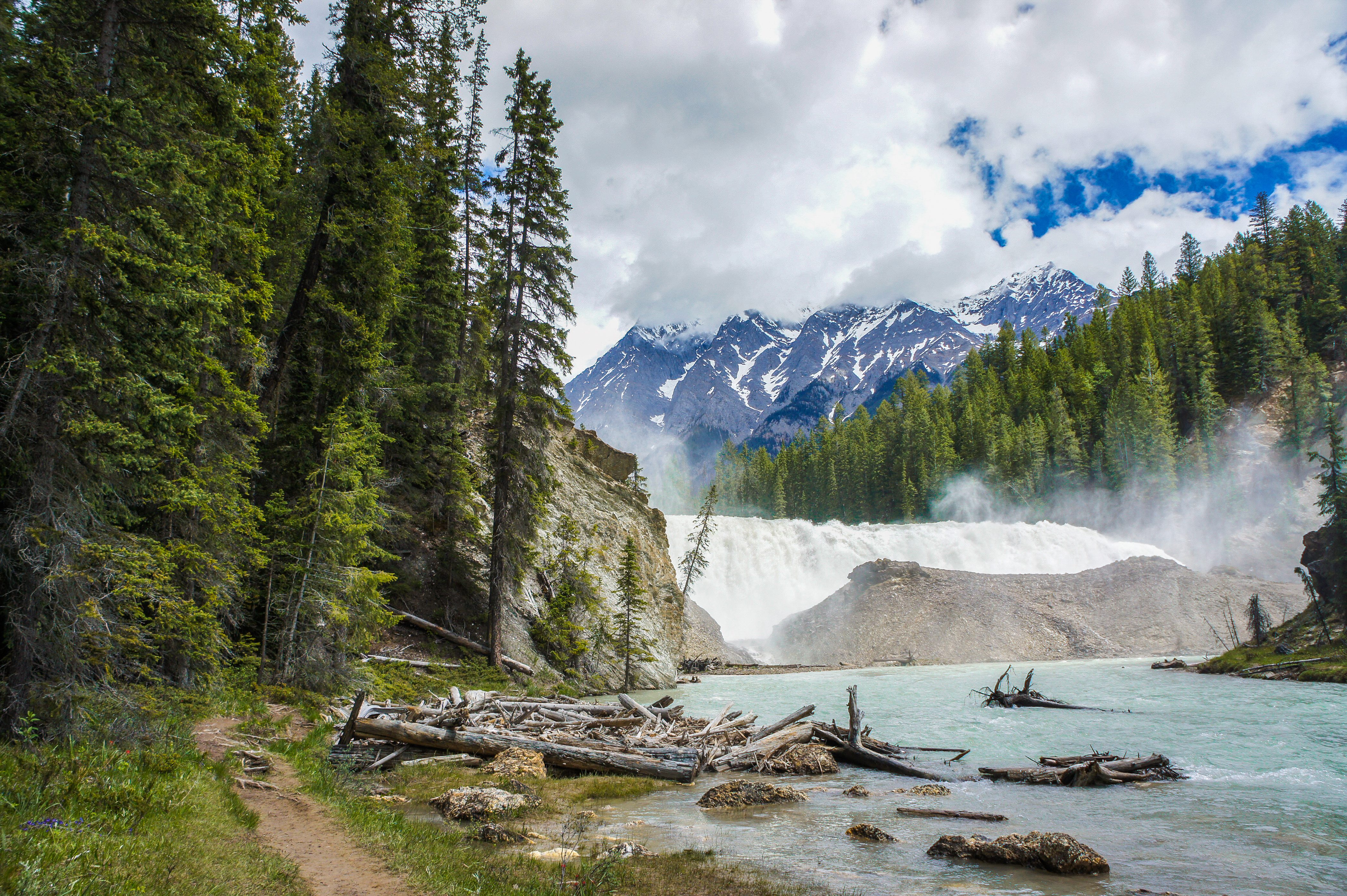 This trail running season is a great opportunity to consider visiting one of Canada’s amazing national parks. Bring bear spray and bug juice, and lace up! 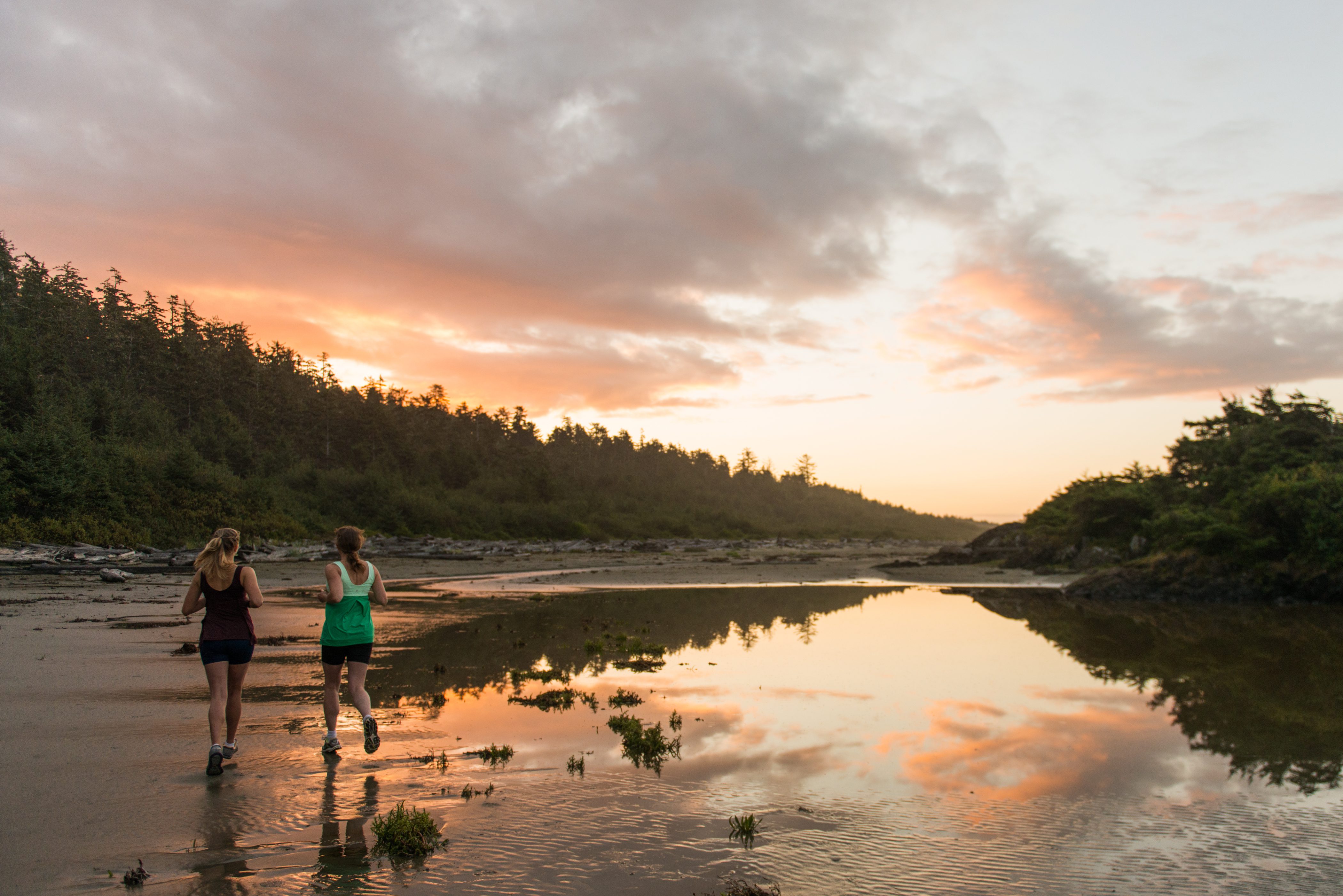 Southwest B.C.
You can’t beat running on white sand beaches and soft paths snaking through old-growth rainforest. The Pacific Rim is on the far side of Vancouver Island and represents a landscape that, to most Canadians, is totally imaginary. Trees that are older than Confederation? Idyllic oceanic views? And the chance to learn about the Nuu-chah-nulth culture, the original people of the region? Check, check, check. The Pacific Rim is great for running. The national park has a “Long Beach Challenge,” which is a 9.5-kilometre route and the park even sells timing chips. Pick up a chip, run the route and then check online to see how your time measures up. Most years, the Edge to Edge Marathon also starts in Pacific Rim National Park. (It’s detoured this year due to construction within the park, but it’s running through similar terrain in June.) And if you’re truly crazy, register in advance (as a hiker) to run the 95-kilometre West Coast Trail as a self-supported ultra.

Ideal destination if:
You’re looking to jump into the deep end of another culture and landscape.

Southeastern B.C.
Yoho is a secret. Just on the other side of Banff, it’s a tiny little national park on the western slopes of the Rockies. The name comes from a Cree expression of awe and wonder. It has 400 kilometres of trails that chart through indelible landscapes: vertical rock walls, waterfalls and mountain passes. Go run these trails. No, really, just because we’ve said it aloud doesn’t mean it’s still not a secret.

Ideal destination if: Yoho, because YOLO.

Western Alberta
Banff’s less flashy little sibling, Jasper offers all the mountain without the glitz. Like Banff, there are heaps of great runs to be had starting from the townsite, and then a multitude of front country and backcountry options. But really, you’re in the thick of the wild wherever you go. (The author was once narrowly not-smacked by a galloping elk while running just outside the townsite.) Tried-and-true routes range from Maligne Canyon – probably the best afternoon mountain jog-jaunt one could ask for in life – to the Skyline – the informal, must-do 44-kilometre mountain marathon – to the 192-kilometre North Boundary Trail. Don’t forget to stop at Miette Hot Springs afterwards.

Ideal destination if: You want the iconic Rocky Mountain experience but sans some of the madness. 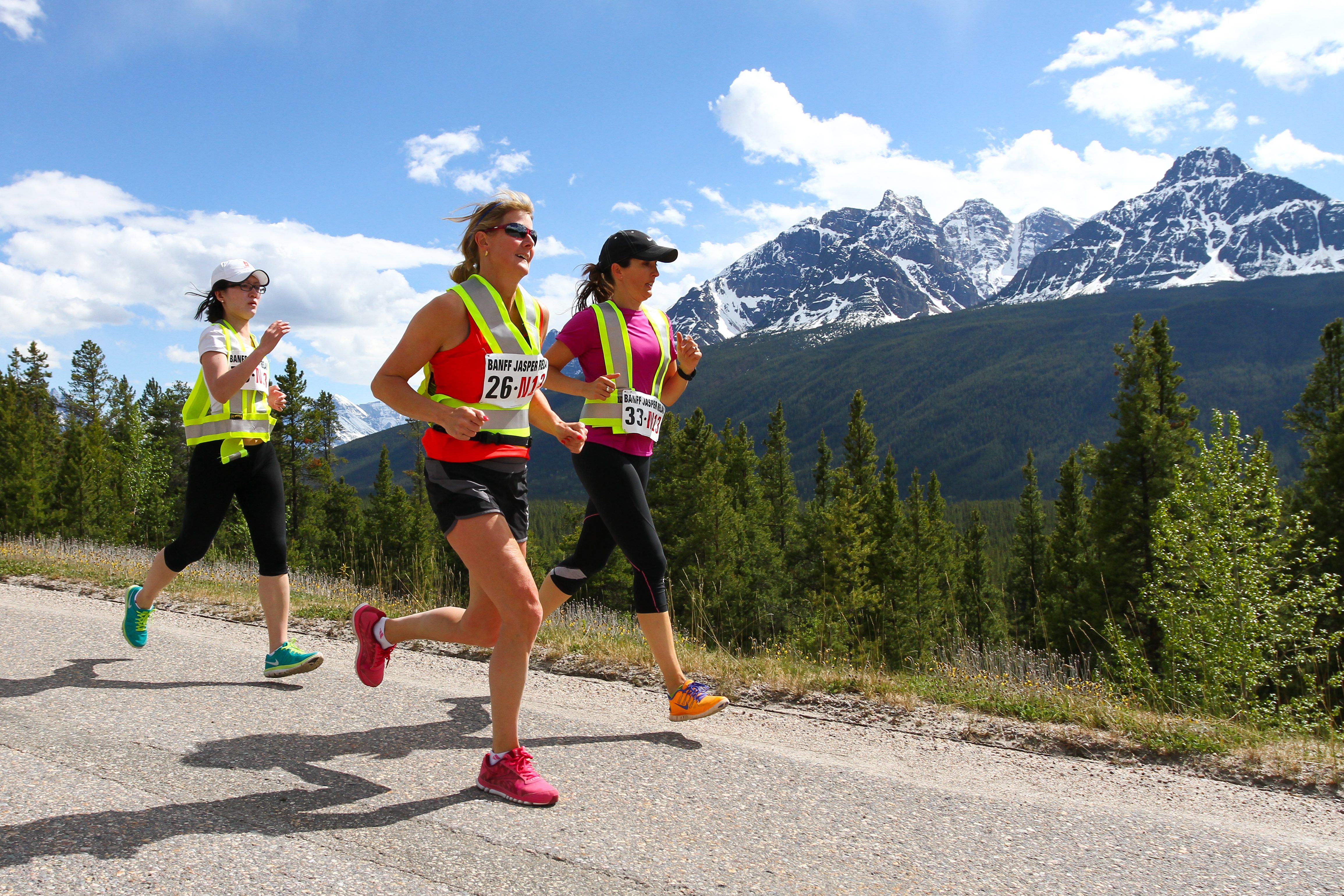 Western Alberta
Sure, the townsite is built up, and sure it’ll be a total shopping mall/zoo all summer long, but it’s not hard to escape the madness in Banff. Whether you camp out just out of town in one of the many Parks-run sites, or stay in the townsite, you’ll have easy access to a great network of trails that run around and through Banff. There are countless
spectacular back-country day hikes that make for excellent mountain running. Just indulge your whimsy: is your penchant a wild flower-dotted mountain valley, a jaw-dropping mountain pass or pristine glacial lake as your destination? Afterwards, you must soak your tired limbs in the hot springs. You must.

Ideal destination for: Hitting some serious trails if a member of your travelling party prefers to shop and/or go to
museums and art galleries instead of hitting up the serious trails. Everyone is happy. 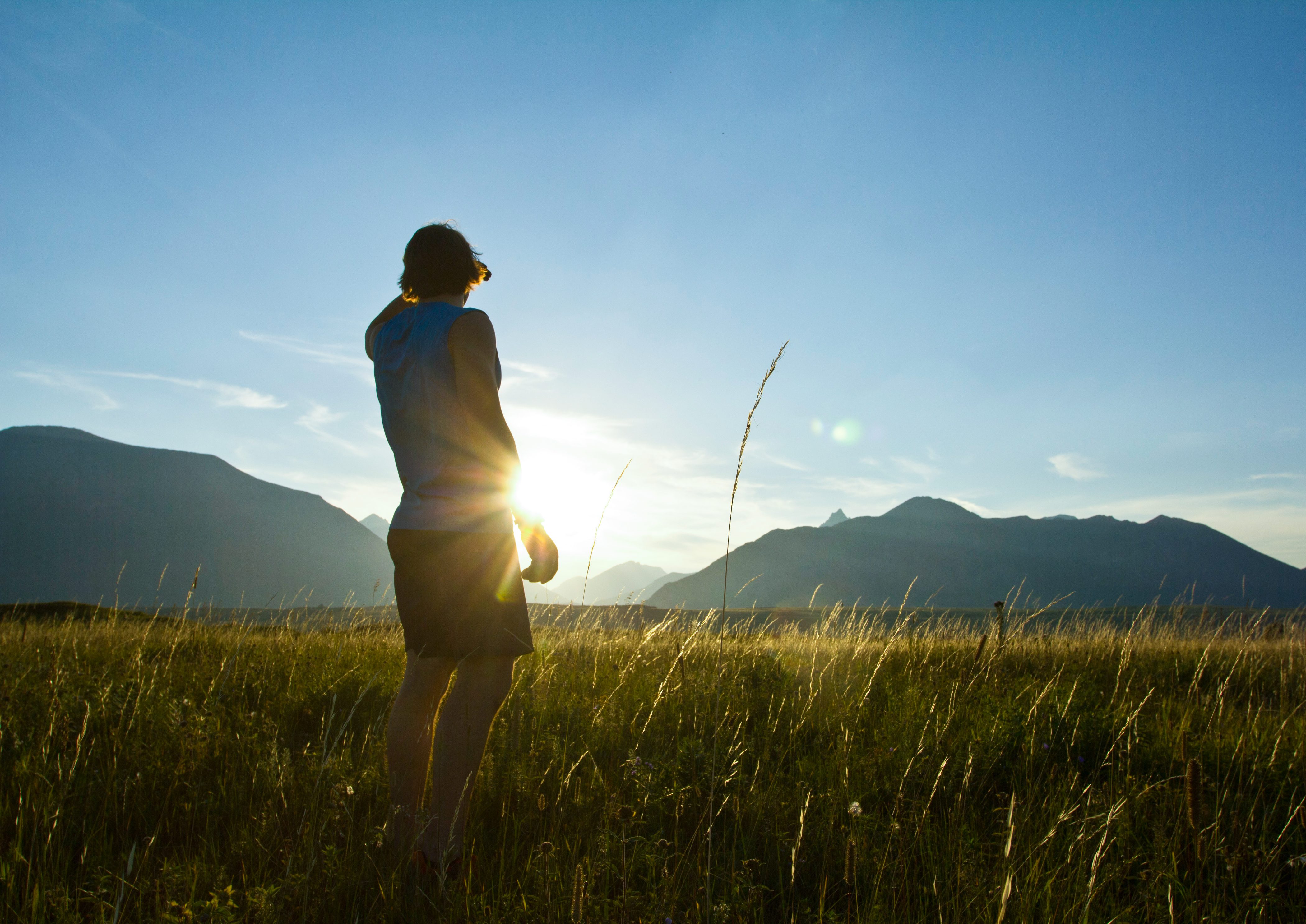 Southern Alberta
Southern Alberta is an odd utopia for trail running. It’s where ultra phenom Alissa St Laurent grew up, and one of the ultras where she cut her ultra-running teeth, Sinister 7 (named after the seven mountain passes on the route), takes place each year. And it’s also home to Waterton Lakes National Park, “where the mountains meet the prairies.” Hours from anywhere, once you’re there, it’s idyllic. The pristine lakes and rugged peaks of the mountains are postcards – and, for the skyline squeamish, there are the promised f lat bits, astonishing panoramas. Thanks to this unique biome, Waterton holds a remarkable biodiversity: half of Alberta’s plant species can be found within its borders. There are also tremendous running and hiking trails, some of which connect to the United States. Ask park officials for the scoop on the “Mad Dash,” a famous 30-mile running route, which requires at minimum a passport and lots of pocket change. (The recommended return route is to hop a tour boat across the international border.)

Central Ontario
With 782 kilometres of trails and as a UNESCO World Biosphere Reserve, Bruce Peninsula is a relatively accessible (for Ontario residents) national park that allows runners to experience the full ruggedness and wonder of trail running. Also, it’s known for its incredible diversity of wild flowers. The Bruce Trail, Canada’s oldest and longest marked footpath, and which follows stunning views of Ontario escarpment, is a nearly 900-kilometre trek that has been run most quickly in 2017 by 44-year-old Adam Burnett in 9 days, 21 hours and 14 minutes. You’re allowed not to run the whole thing, though. The national park itself encompasses just a few shorter trails, which are great for beginners, including a 5K tour around Cyprus Lake.

Ideal destination for: Those not wanting to venture so far from the big city but who want to run wild.

Southern New Brunswick
Home to the world’s largest tides, Fundy National Park is a destination for paddlers and scientists researching the endangered Atlantic salmon. It’s also a great place to run, with over 100 kilometres of trails that show you beaches, forested valleys, and waterfalls. The park has come up with several set routes for those looking to run long. There’s the “Fundy Circuit,” which is a 48-kilometre route showcasing the diversity of the landscape. And then there’s the “Fundy Footpath,” a continuous footpath that starts in Goose River in the National Park and follows the Fundy coastline for 41 kilometres.

Ideal destination for: Running on East Coast beaches, of course. 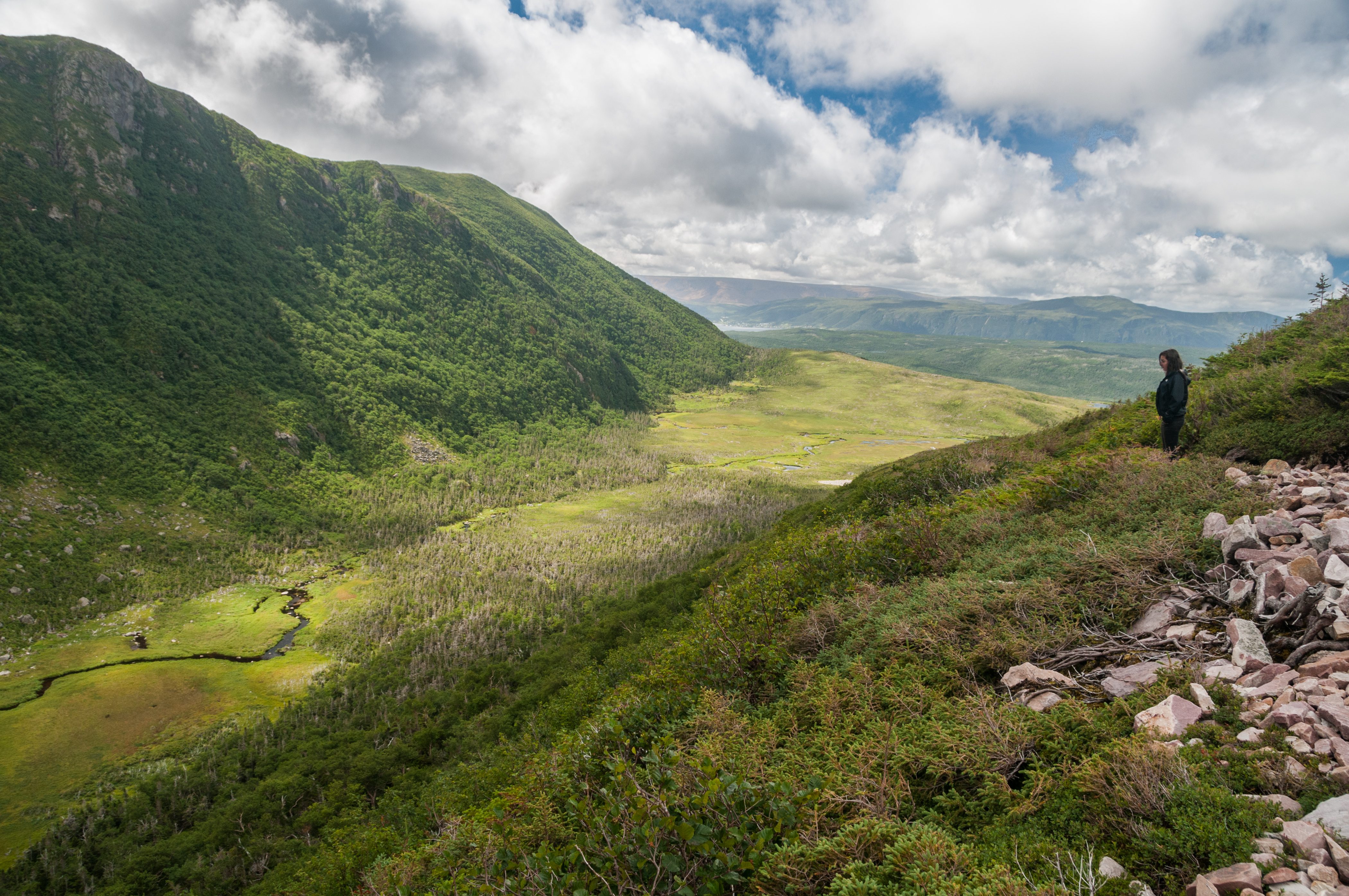 Western Newfoundland
A UNESCO World Heritage site, Gros Morne is another national parks destination whose terrain, described by the
parks service as “soaring fjords and moody mountains tower above a diverse panorama of beaches and bogs, forests and barren cliffs,” is a love note from Mother Earth asking you to please never go back to the city. Except it’s a love note brought about by tectonic mayhem and some of the landscape is “lunar.” There are over 100 kilometres of front country hiking trails that trace this ancient and strange terrain, and, yes, you can run on them, too. The Gros Morne hike and the Tablelands are highlights.

Ideal destination for: Seeing a fjord in real life and outrageous geological formations.