Sexton is once again gearing up for other impressive run at Scotiabank Toronto on October 16th and right now, she appears primed to better her time from 2015 amid a field of fast Canadian females. The race also serves as the Canadian Marathon Championships. Most recently, she ran and won the Vancouver Eastside 10K— her final tune-up race before the marathon.

We caught up with Sexton who is back logging lots of miles in London, Ont. She chatted with us about her training, her goals and her prolific use of Strava.

Canadian Running: How has your training gone to this point? What have you done differently (or stuck with) this cycle compared to previous ones?

Leslie Sexton: Towards the end of August, my fitness started to come around and my workouts have gone very well since. I am now running faster in workouts than I was last year leading up to STWM. As such, I feel confident that I should be ready to run a personal best on October 16th. 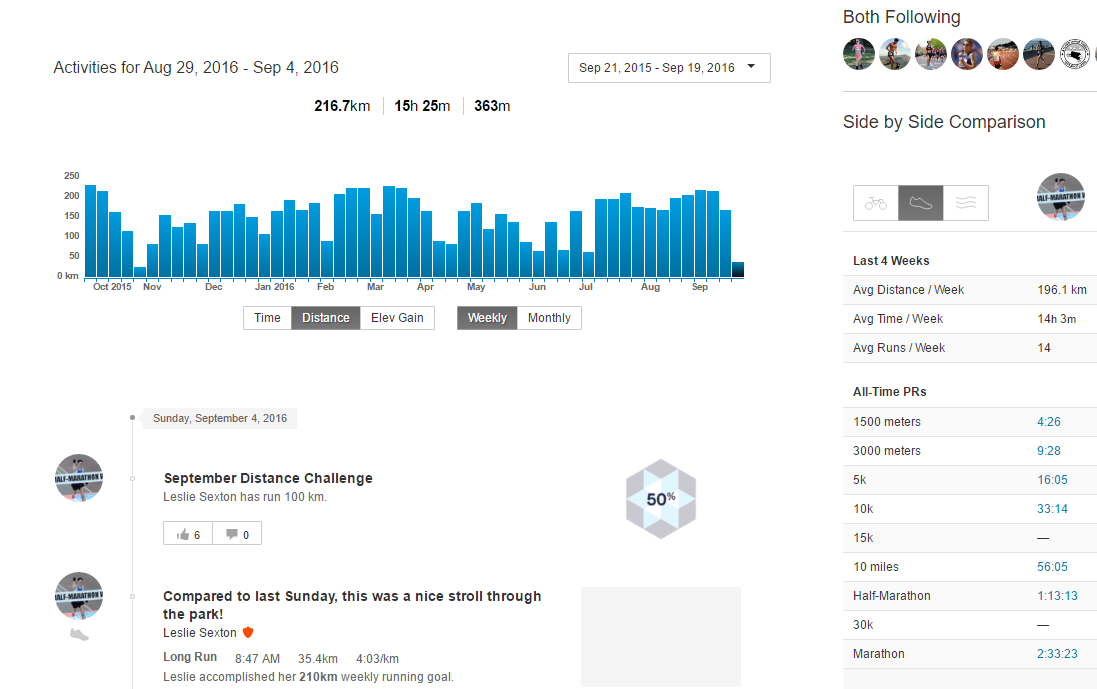 My buildup hasn’t changed too much from last year. I have run a lot of the same key workouts at marathon pace as I have in previous builds. For this summer, I brought the mileage down a little bit so my peak weeks are in the 130-mile (210K) range instead of in the 140s (225K). Given how hot it was, I needed to drop it down slightly to be able to recovery properly and to be consistent in my workouts.

One thing I did add this fall were strides within an easy run once per week so that I didn’t completely neglect my speed during the marathon build. It isn’t a ton of extra work, usually something like ten times thirty seconds hard with ninety seconds easy. I think this definitely helped me feel more comfortable running at 10K pace in the Eastside 10K and I’m hoping it will make for an easier transition into cross country training as I prepare for the Canadian Championships in Kingston after the marathon.

CR: What are your plans for the next few weeks as far as training goes? What sort of quality runs do you have planned and what does your taper look like?

LS: With less than four weeks to go, I will do two weeks of high mileage and two weeks of taper before STWM. This weekend, I will do a marathon simulator workout, which is borrowed from the Brooks-Hansons group in the U.S. I will run 26K at marathon pace and practice my fueling for the marathon. My last big workout at marathon pace was five by 5K about two weeks ago, so I’m doing similar volume with this one and taking out the rest.

The following weekend, I will be running the Springbank Half Marathon here in London as a workout, likely at marathon pace as well. I love running in local events here in London and it will be a great opportunity to get a bit more pace work in. 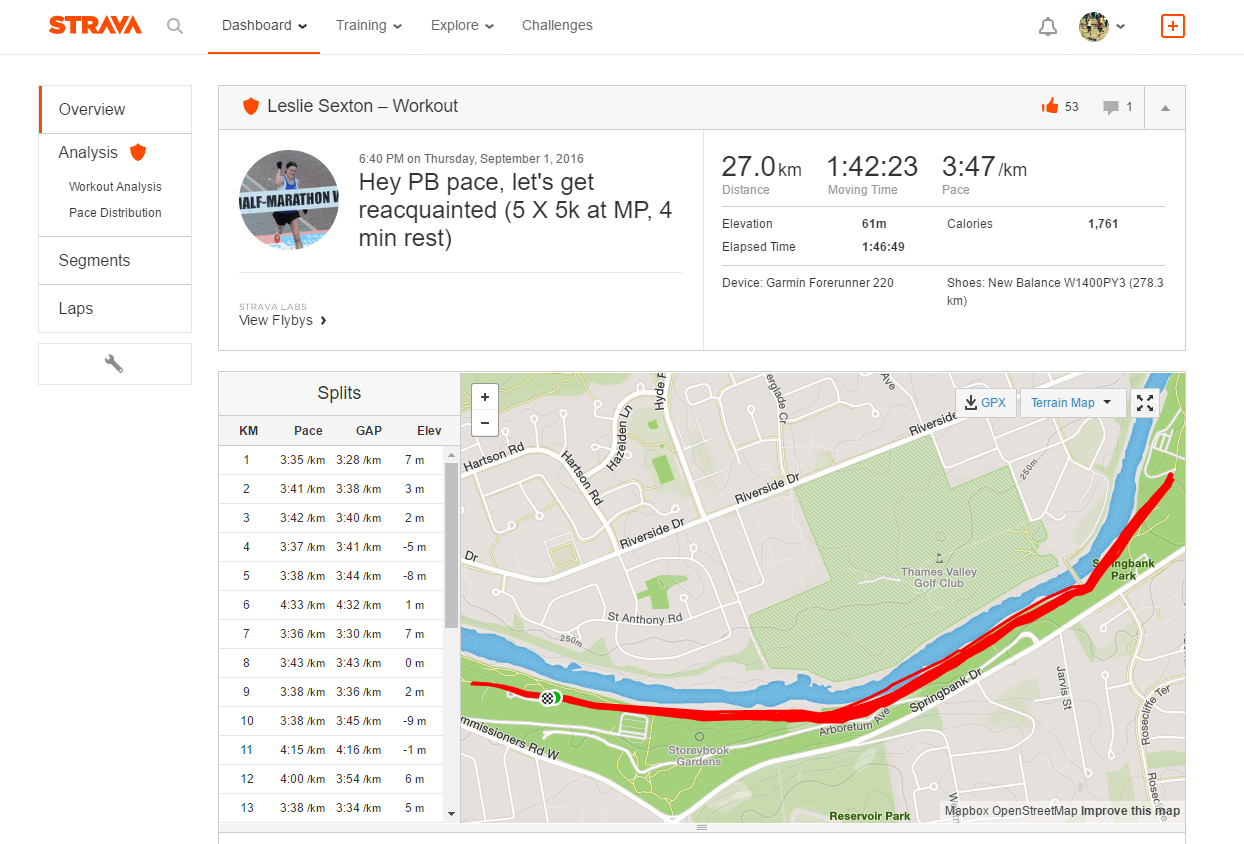 My mileage over the next two weeks should be around 210K, then I will drop down to 150 for the first week of my taper and around 110K on race week (which includes the 42.2K of the race). My last hard workout is eleven days out from the race and I will do some intervals a little faster than half marathon pace. Usually by then my legs will be feeling good, so it is a big confidence boost.

CR: What are your goals going into STWM this year? What will you be happy with?

LS: My goal at STWM is to qualify for the World Championships next year in London, England. Unfortunately as far as I know Athletics Canada hasn’t announced a marathon standard yet, so for now, the goal is to run a personal best and hope it is under the standard. Last year in Toronto I was able to identify how fit I was and run an evenly paced race, and so I’m definitely hoping to do that again this year.

CR: You post all your runs to Strava. What do you feel are the benefits of doing so?

RELATED: Strava reveals which cities are home to fastest runners and most marathoners

I have been using Strava for about two years now and I think it has a lot of great features as a training log. One feature that is really useful to me is the “matched runs,” where Strava will compare your times when you’ve run the same route. Since this build has been very similar to last year’s, I can compare my long runs and workouts this fall to see how I am progressing.

But far and away, I feel the community aspect of Strava is even more valuable. Seeing the training of other elite runners motivates me to be consistent in my mileage and workouts. It was really cool to follow Reid Coolsaet’s buildup to the Olympic marathon this summer and see what a 2:10-guy does in terms of training.

Whether I make it to the Olympic level or not, I hope I can inspire someone by sharing what I do on a daily basis. In particular I want other women to try high mileage and longer distances, not only to bring more talent into the marathon but because the training is really enjoyable and I think more people would like it and run well if they tried it. I put everything I do on there, the good runs and the bad. Elite runners aren’t robots; we struggle through the bad days just like everybody else.