The first thing I have to say is that the Oh She Glows cookbook is gorgeous. Looks aren’t everything, but I do appreciate a cookbook with attractive photos. The book is also a favourite of our food blogger and elite runner, Kim Doerkson.

Oh She Glows started as a blog written by Angela Liddon, with hundreds of vegan recipes. Despite growing awareness, many people in this day and age continue to think of veganism as subsisting on nothing but salads. The Oh She Glows cookbook and blog prove that a vegan diet can be anything but boring, if done properly.

With more and more research coming out with regards to the environmental impact of meat consumption and the rising popularity of vegan and vegetarian products for athletes (Vega, started by elite triathlete Brendan Brazier), an increasing number of athletes are toying with less meat in their diets.Kim finds that she likes the variety that the vegan cookbook adds to her diet: “Even if it’s not a change due to allergies or intolerances, it’s always nice to mix it up a bit.  I use the Oh She Glows blog quite frequently and it’s not because I’m vegan or vegetarian, I just like the options she provides.”

If you’re interested in trying out some new vegan recipes, Oh She Glows is the cookbook for you. I’m the type of person that has always been curious about the idea of a green smoothie—curious, but not curious enough to go hog-wild with the spinach and kale or what-have-you without a recipe to follow.

After receiving the cookbook for Christmas (or should I say for Boxing Day?), I tried out Liddon’s signature “Green Monster” smoothie—aptly named as many are afraid to try it. With nut butter, frozen banana, chia seeds, vanilla, almond milk dominating the taste, I could barely detect the cup of kale that I had included. Furthermore, the smoothie was delicious. And green.

When I asked Kim Doerkson what she liked about Oh She Glows, she said: Angela uses wholesome ingredients that allow even the

most decadent recipes to have a healthy twist on them (her chocolate avocado torte is unbelievable).  I like how she creates meals that are hearty, easy to make, and so flavourful.  No matter what recipe I’ve used, it’s always worked and tasted delicious.

I can’t wait to try out more recipes and I’ve even intrigued my carnivorous family. For runners looking to step up their nutrition game in 2015, veganism is all about nutritional density. Ease up your environmental impact and increase your health? Sounds like a winning situation to me.

If you’d like to start with a few recipes that are runner-approved, Kim has made: 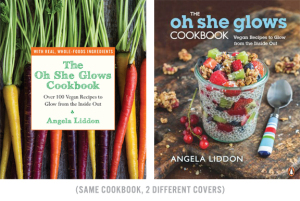