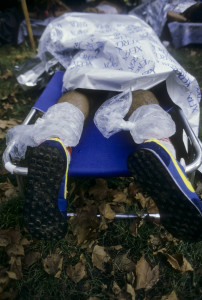 For decades, the default response to sports injuries has been easy to remember: rest, ice, compression, elevation – R.I.C.E., a mnemonic reputedly coined by sports physician Dr. Gabe Mirkin in his 1978 bestseller The Sportsmedicine Book. Now Mirkin is having second thoughts. Could ice, the standard cure-all for running aches, actually be counterproductive?

Decreasing pain and swelling sounds great, of course, but it’s worth taking a step back to consider what we hope to accomplish when we slap an ice pack on a twisted ankle or a nagging case of shin splints. The first priority is to stop the pain. Beyond that, the longer-term and more important goal is to heal the injury as quickly as possible and return to full strength. The problem is that these two goals may be in conflict.

Mirkin points to a 2010 study from the Cleveland Clinic’s Neuroinflammation Research Center that demonstrated how post-injury inflammation, far from being a problem, actually plays a key role in healing injuries. Your body responds to tissue damage by sending inflammatory cells called macrophages to clear out the damaged tissue; these cells release hormones and growth factors that help new tissue rebuild. In the Cleveland Clinic study, mice that were genetically altered to block their inflammatory response were unable to heal from injuries.

Ice, of course, is used for exactly that reason – to help stop inflammation. The cold causes blood vessels to constrict around the injury, blocking the flow of blood that would bring inflammatory cells to the injury site. And ice isn’t the only culprit: other ways of reducing inflamma- tion, like anti-inflammatory drugs, have also been shown in numerous studies to delay injury healing.

So where does that leave us? If you have an acute injury – you sprain an ankle on a twisty trail run, say – Mirkin still sees a role for ice to control pain in the immediate aftermath, applying it for 10 minutes every half-hour. But after a few hours, and for the typical nagging overuse injuries that plague runners, he sees no role for ice.

“Gravity pulls fluid into an area, and the resultant swelling presses on arteries to possibly delay the rate that blood brings in healing nutrients.”

So is that the final word? The missing piece of the argument – both for pro-ice and anti-ice debaters – is controlled studies in humans. (It’s surprisingly difficult to assemble a bunch of volunteers with identical ankle sprains, then test different treatments on them.) But for now, it makes sense to consider ice as the equivalent of an ibuprofen: useful to treat (or mask!) the symptoms of an injury, but not for actually fixing it.