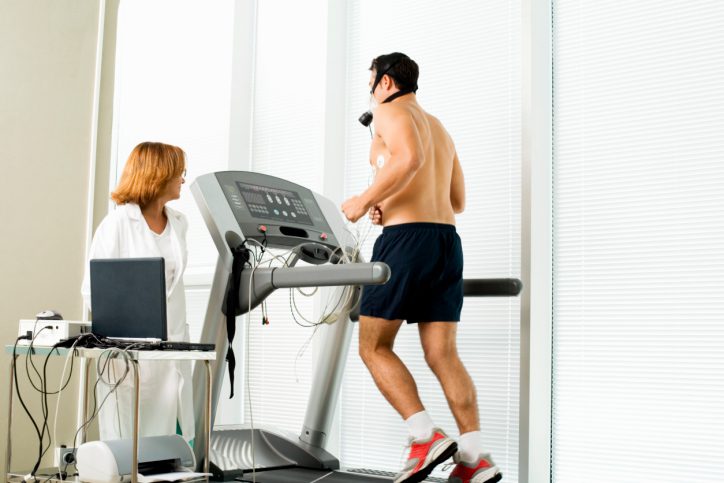 As an athlete myself, I had an idea what VO2 max was and how it played a role in training, but to be completely honest, I didn’t know that much about it.

I’ve gone and figured it out a bit more in the hopes of helping any fellow lost souls out there understand a bit better also.

One of the tricks to endurance sports is your ability to have your blood deliver plenty of oxygen to your muscles, and one of the best indicators of cardiovascular fitness is VO2 max, or your “aerobic capacity.” It’s a measurement of how much oxygen your body uses when producing high levels of power.

Measurements of VO2 max are recorded in one of two ways. Generally, it is measured in litres of oxygen per minute, or how many litres 0f oxygen your blood delivers to your muscles in one minute of maximum effort aerobic exercise. It can also be calculated as a rate relative to weight, being measured in milliliters per kilogram of body mass each minute. The relative measurement is often used to compare high-performance athletes, but the idea behind the measurement remains the same. A high VO2 max is, at it’s core, an indicator of when your body switches from aerobic to anaerobic metabolism.

Testing to find your VO2 max, I’m told, can be excruciating. I’ve never done it, which might explain why I didn’t have a firm grasp on it, but the test usually involves running on a treadmill or cycling on a stationary bike while exercise intensity is slowly dialled up. Oxygen and carbon dioxide of inhaled and exhaled air is measured until the oxygen consumption stops rising. At that point, your blood can’t carry any more oxygen to your muscles. The test regularly leaves fit, fast athletes in a heap on the floor.

What does this mean for you?

Well, research suggests a major factor in VO2 max is genetic, a good example being that females generally see VO2 max readings about 10 per cent less than their male counterparts. It also declines with age.

So, some people are born with a leg up in the endurance category, but it can also be trained. A sedentary person will measure about 35 ml/kg/min, but some of the greatest endurance athletes have tested in the mid- to high-90s. The best results are littered with cross-country skiers and cyclists, but there are a few familiar names to people who follow top-level track and road running.

Someone who has just taken up running (or cycling, or cross-country skiing) will see a quick increase in VO2 max, but eventually athletes  seem to reach their genetic potentials and  find themselves butting their head against walls trying to see improvements. This is where things can get fun, and also where my knowledge started to get a bit more sporadic.

Erythropoietin, or EPO,  is a natural hormone everyone has that tells your bone marrow to produce more red blood cells. Red blood cells carry oxygen to your muscles, so more red blood cells will help increase VO2 max by fuelling them with more oxygen. One way to do this naturally is to live at a high altitude. The higher you get above sea level, the less oxygen there is, sort of. Generally, the air that we breathe is comprised of just below 21 per cent oxygen. This holds true at all altitudes, but as you get higher the barometric pressure decreases meaning each breath you inhale has less oxygen in it. If you live at high altitudes long enough, your body begins to adapt and release more EPO, in turn producing more red blood cells.

This is the root of blood doping and altitude training. Athletes having been known to live at higher altitudes and come down closer to sea level for training, naturally increasing how many red blood cells are in their blood. Blood doping looks to gain a similar edge without living at high altitudes through the use of synthetic EPO injections. One is a great training strategy and the other is banned in sport.

So VO2 max matters to endurance athletes. To some, it matters a lot, to the point where they’ll get up and move to an area with less oxygen or inject synthetic EPO to help get a small bump.

But if VO2 max is such an important measurement, why don’t we see those with the highest test results always winning major competitions? It might be a good indicator, but it’s not the only indicator of how well someone will perform, but those are for another day.