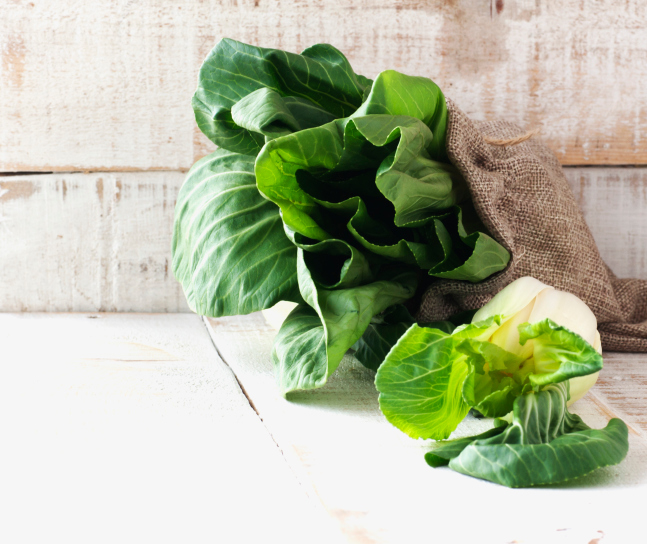 Bok choy– it’s one of those vegetables that you’ve likely seen at the grocery store, but don’t make a point of adding to your basket every week like you do with other staples like carrots, or cucumbers. But, you definitely should be picking up this cruciferous veg more often.

Bok choy is one of the most nutrient-dense vegetables you can get. Not only does it have an excellent vitamin C, K and A profile, but it is also unique in its calcium availability. Since bok choy is lower in oxalate (a substance that binds to calcium and prevents its absorption in the human body), than other vegetables, an increased amount of its calcium actually makes it into your system. You can actually readily absorb more calcium from bok choy than you can from milk. How crazy is that?

Here are some recipes to help you experiment with this must-have ingredient:

This is an easy one-dish-wonder of a meal that is ready in a mere 30 minutes (if you remember to thaw your shrimp first).

Black cod, which is also known as sablefish, is counter-intuitively, a white fish. This meal comes in at under 350 calories, but provides approximately 36g of protein. This is definitely a plan-ahead meal though, as the fish should be marinated for best results.

Normally, fried rice is something we associated with those nights when we’re too tired to function and have to sift through the drawers for the Chinese take-out menu. But, this recipe manages to take that indulgent fried rice flavour and turn it into something… healthy! Who knew that when you put cauliflower in a food processor, you end up with a consistency almost identical to rice?

Even the most fervent of salad-eaters likely doesn’t have a bok choy salad in their repertoire and this recipe is just the one to fill that void. The sesame-almond crunch topping provides a granola-type decadence to each bite of bok choy. Even those for whom bok choy isn’t a new veg, eating it raw is likely a new experience!

This is another Asian-inspired dish with a healthy twist, swapping out traditional white rice for a mixture of quinoa and/or amaranth.

This is the time of year when none of us are passing on a meal that promises a renewed ability to fight off the season’s colds and flus. This recipe’s author advises to turn to the kitchen before the medicine cabinet, when you start to feel under the weather. We’ve seen the power of food to have a healing effect on the body, such as studies done on the effectiveness of ginger as an anti-inflammatory for athletes.

Speaking of ginger (see above recipe), here it appears in tandem with bok choy for a nourishing seafood dinner. This easy recipe is ready in less than half an hour.

This crunchy salad has the flavours of Chinese takeout embodied in a healthy meal (omit ramen noodles if you’re super committed).

If you always order wonton soup when you go out, make sure you try out this homemade, lightened up wonton soup. You might be surprised that yours tastes even better than a restaurant’s.

Did you know that you can make quinoa in a rice cooker? This recipe is low-cal and nutritious. For an extra protein-kick, add chicken or chickpeas.