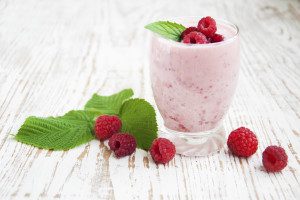 While there’s nothing wrong with falling back on key healthy running foods like pasta and yogurt, if you can recite your daily menu by heart, you may be in need of a grocery cart shake-up – not only to excite your taste buds but to help your body get all the nutrients it needs to boost health and running performance. To smash out of a food rut, try these palate-pleasing substitutes for well-loved runner staples.

If you dig: Yogurt

Similar to yogurt, kefir – a sour, fermented dairy product — is brimming with live probiotic bacteria. Probiotics are not just important for digestive health, but are thought to strengthen the immune system. In fact, the British Journal of Sports Medicine reported in 2008 that probiotics can activate immune cells in distance runners thereby reducing the severity of respiratory illnesses such as colds. Because this bacteria breaks down much of the lactose, kefir probably can be enjoyed by those with lactose intolerance. Beyond good-for-you critters, this great white originally from Eastern Europe is plump with muscle-building whey and caseine protein, vitamin B12 for energy metabolism and a third of your daily requirment for bone-strengthening calcium per cup.

Find It: Peek in the dairy section of health food stores and some larger supermarkets. It also comes in drinkable forms.

Devour It: If you find kefir too sour on its lonesome, try mixing it in a blender with milk, banana, frozen berries and a dollop of nut butter. Whirl into a serious post-run smoothie.

If you dig: Pasta

Made from wheat flour and gluten-free buckwheat flour, chewy Japanese soba noodles have just as much energizing carbohydrates as pasta. The phtyochemical rutin in buckwheat has been found to halt the expansion of body fat cells, positively impact blood cholesterol levels and regulate blood glucose. Plus, a greater intake of nutrient-rich whole grains such as soba reduces abdominal fat better than refined grains, according to Penn State researchers. The study authors praise the extra fibre and antioxidants in whole grains, which help control inflammation and insulin (a hormone that can tell your body to store belly fat).

Find it: Look for soba at health food stores, Asian markets or the specialty section of some supermarkets.

Devour it: Soba can be prepared like pasta and subbed for it in almost any recipe. Replenish energy stores after a run by mixing it with cooked chicken (or tofu), edamame, cherry tomatoes, olive oil and chopped cilantro.

If you dig: Whole-wheat bread

Made from sprouted whole grains and legumes, no bread has more muscle-friendly protein – about 8 grams per slice. Not to mention that sprouting makes it jam-packed with vitamins, minerals, dietary fibre and a wonderful nutty flavor. Higher protein and the sprouting of the grains also results in a lower glycemic index bread. Significant, as a study in the International Journal of Sports Nutrition and Exercise Metabolism determined eating a low-glycemic meal three hours prior to a run can increase time to exhaustion compared to a high-glycemic meal such as one with refined, unsprouted white bread.

Find it: Look in the refrigerated section of health foods stores and the natural foods section of larger grocers.

Devour it: For a pre-run snack, try slathering sprouted bread with some almond or peanut butter and sliced banana.

If you dig: Sports Drinks

Each serving of refreshing, slightly sweet coconut water packs in 14 grams of natural sugars and plenty of potassium (600 milligrams per cup, about 50 percent more than a banana), along with some calcium, magnesium, and sodium. Tangy coconut water has none of the saturated fat found in coconut milk, which is made from the grated pulp of mature coconuts.

Find it: Fortunately, you can skip the flight to the tropics for a fix as coconut water, which is available at many health food and grocery stores.

Devour it: Glug it post-run to quench thirst and replenish carbohydrates and electrolytes.

If you dig: Salmon

Environmental concerns have turned eating farmed salmon into fishy business, which may have you casting your line for alternatives. Look no further than arctic char. This traditional staple of the Inuit has a mild, light, salmon-like flavour, but less fishy taste. Like salmon, char is chock full of top-notch protein and ticker-friendly, anti-inflammatory omega-3 fats. Higher omega-3 intake has been credited with lowering heart rate during exercise which would reduce how hard a run feels

Find it: A good fishmonger often has this swimmer on ice.

Devour it: Arctic char can be used in any recipe calling for salmon and responds well to marinades. To make it right, cook on medium-high heat until one side is slightly brown, flip, repeat on other side and then reduce heat to medium and continue to cook until lightly pink inside.

If you dig: Dark chocolate

These roasted cocoa beans that are smashed into small nuggets contain all the healthy benefits of dark chocolate bars minus the added sugar. Perks of this purest form of chocolate include plenty of satiating fibre (a whopping 9 grams in just 1 ounce), antioxidant flavonoids that studies show improve memory and reduce blood pressure and magnesium. As a part of hundreds of biochemical reactions, magnesium helps maintain ideal blood pressure and muscle and nerve function, build break-resistant bones, and enhance immunity.

Find it: Many health food stores have bags of cocoa nibs or try online at navitasnaturals.com.

Devour it: Some find nibs too bitter straight up so mix them into yogurt, oatmeal, cottage cheese, baked goods and fruit salads. Convert a morning cup of coffee to the dark side by grinding them up with coffee beans.