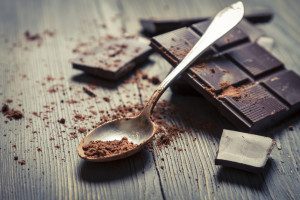 Go ahead and have a bite of chocolate.

Earlier this month Spanish researchers found a negative correlation between the amount of daily chocolate intake in teens and body fat composition.

The results seem counter-intuitive, as high-calorie foods generally don’t help people lose weight, but the hypothesis is that chocolate is high in flavonoids which are believed to curb the production of cortisol, a hormone which signals to your body to store fat.

It’s worth noting that the study didn’t find the chocolate helped any of the teens lose fat, just that those who had higher chocolate intake stored less fat. It’s unlikely the chocolate would help anyone lose weight, but it may not be a terrible choice if you’re just looking to maintain your current weight.

Although the study was only done on teens, previous research has found similar results in other demographics. In 2012 a study of over 1,000 men and women with an average age of 57 found that regular chocolate-indulgers had lower body fat percentages.

In addition, dark chocolate has been linked to lower blood pressure and cholesterol levels.