From record setters to incredible age-groupers to those that make it all possible, Canada’s running community has several outstanding individuals. We honour seven deserving runners who have made a huge impact on our sport in the past year. We chose Andre De Grasse as our trackie of the year. 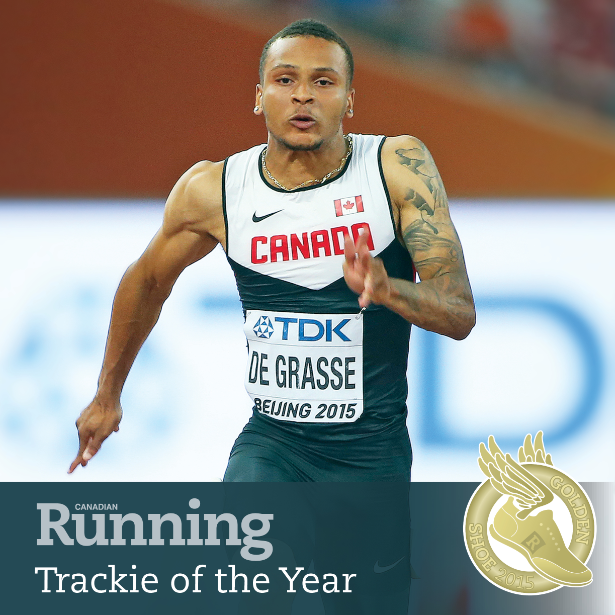 How do you top winning the American collegiate (NCAA) 100m and 200m titles in times (wind-aided but still) that only a handful of men have ever run? How about a double gold in the same events on home soil at an international games? A Canadian record (legal wind) in the 200m as well. Only two other Canadians have run faster over 100m; maybe you know them? Donovan Bailey and Bruny Surin. And if that’s not enough, you go to the World Championships and snag a bronze medal, and a shout-out from Usain Bolt himself. Yes, Andre De Grasse had a pretty good year.

If you don’t know the story by now, it’s standard rags-to-riches fare. He was running (not in the good way) with a bad crowd, and lacked direction. His Markham, Ont. school, Milliken Mills, didn’t have a basketball team so he went out for track. His friend pushed him to run the 100m at a track meet, so he did, in basketball shorts,
and ran a time (10.90) that would be good for a top high school runner, never mind a beginner. A local track coach, Tony Sharpe, saw that and figured he could be pretty good if he tightened up his ship. He did, managed a scholarship to the University of Southern California, and he’s developed under coach Caryl Smith Gilbert into the still-raw talent
that he is.

“Last season was definitely one to remember. I didn’t expect to accomplish what I did so early in my track career. But I still have a lot left in the tank and a lot of big goals for the future. Thanks for the award, I appreciate it. You guys have a great magazine and I’m honoured that you chose me for Trackie of the Year.”

That’s the thing: there’s more in the tank. Sharpe suggests De Grasse could be the greatest sprinter Canada has ever seen. His form is unorthodox and could still use some cleaning up. And he’s only been in the sport for a few years now, while many of the top kids will start training and racing in Grade 9 and have nearly a decade under their belts when they graduate university. So for 2015, yes, he’s the Canadian Running Trackie of the Year. In 2016 and beyond, he could be the best in the world.