We’re only halfway through the track and field portion of the Games in Rio and already been quite dramatic. For a supposed non-contact sport, the track has been filled with thrills, spills and… dives.

Haiti’s Jeffrey Julmis eats it on the first first hurdle

Poor guy. A rough way to end the Olympic dream.

Mo Farah falls, gets up and wins a gold medal 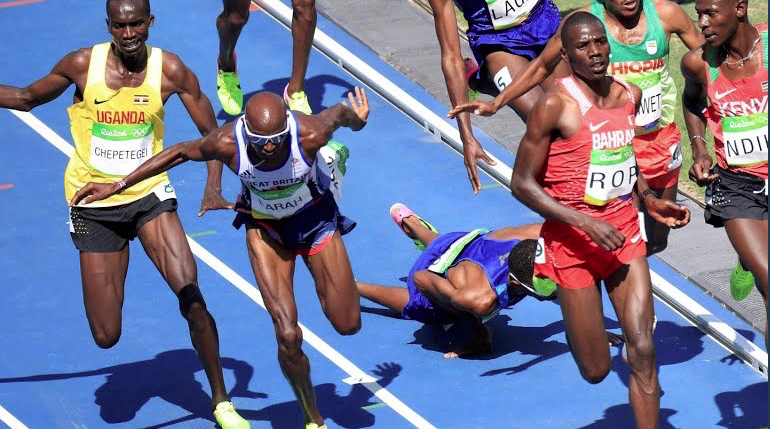 As we said before, there’s no stopping Mo!

Ugandan steeplechase runner does a header into the barrier

Uganda’s Jacob Araptany had one nasty fall in the 3,000m steeplechase final #athletics#Rio2016pic.twitter.com/INbrbfx2rT

Ash appeared to catch the last hurdle and struggled with his balance as he came to the finish line.

Brazilian turns track into slip ‘n’ slide, dives to qualify for next round

We’re sliding back into Primetime, just like this runner slid past the finish line. Track rain delay is over https://t.co/hItDERqHIx

Insane finish in the 400m final, with #BAH Shaunae Miller diving for the finish line and taking the #Gold medal https://t.co/QAnyIgfDwn

The internet freaked out after Miller dove for gold, beating out American Allyson Felix. It’s not against the rules to dive.