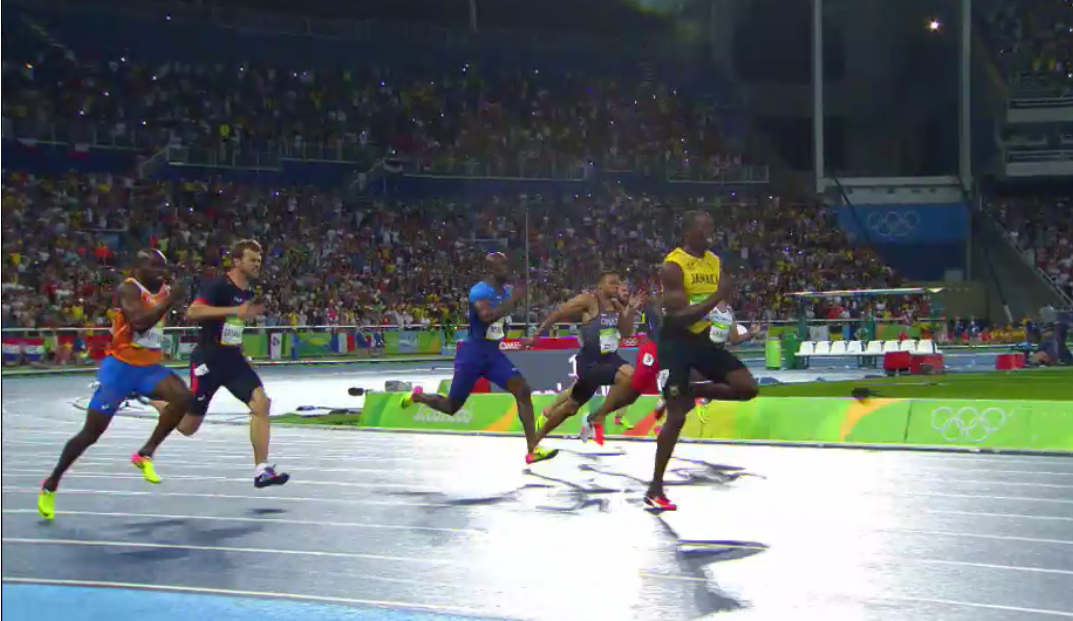 The biggest story of the Games so far has been the bromance between Usain Bolt and his budding protege, Canada’s Andre DeGrasse.

And its fitting that the two will share the podium in the 200m. Bolt caps off his individual races in Rio as the double-gold medallist yet again, a feat that surely won’t be repeated anytime soon. He’s said that these are his last Games, and he’s clearly found an heir apparent in DeGrasse. French sprinter Christophe Lemaitre was the unexpected bronze winner.

Although there was a lot of hype around DeGrasse after his surprising bronze at the IAAF World Champion in Beijing last year, no one could have predicted that he’d deliver to this degree in Rio. In the semifinal, he broke his own Canadian record by running 19.80. In the process, he nearly beat Bolt, triggering the big Jamaican to wag his finger as if to say, “not so fast, save something for the final.” Clearly, DeGrasse had something left, running a spectacular 20.02, outpacing a stellar field for his second medal in Rio.

I like the fact that @De6rasse doesn’t seem happy about his silver… This guy really wants to be the best. pic.twitter.com/lMs9Ia0tNA

The other true contender, third place Christophe Lemaitre, ran a strong race, finishing in 20.12 as the dark horse of the Rio Olympic Games. Most were expecting US sprinter LaShawn Merritt to stand on the podium next to De Grasse and Bolt. Merritt ended up sixth with a 20.19.

Bolt just made history by winning the 100m and 200m now in Rio, London and Beijing and the Canadian gave him the best competition. While many athletes end up going to their first Olympics as a sort of “practice” round, the 21-year-old sprinter is taking home two pieces of hardware. He joins the likes of Robert Kerr and Percy Williams– two of the best sprinters to have come before him. Andre De Grasse is the future of sprinting in the world as this is Bolt’s last Olympics.

After the race, it was clear that De Grasse wants more out of himself. He has just run in yet another history-making race, won two medals at his first Olympics and has one event to go where he’s likely to get a third.

“I couldn’t catch him. It is what it is,” he says in a post-race interview after saying it was hard to say if he’s impressed with his 200m run. But he’s excited about his medal and is looking forward to running the men’s 4 x 100m to cap off his Olympic experience.

Donovan Bailey also watched and had a few words about De Grasse after his performance. “I love the hunger,” said Bailey admiring De Grasse for wanting more from himself.

Grasse and Bolt will look to elevate their respective 4x100m teams for yet more medals in Friday night’s relay.