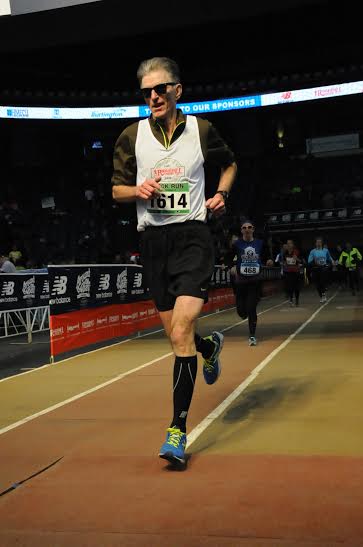 On the Friday night before any summer long weekend in Ontario, a pack of runners gathers in the parking lot of Dundas Conservation Area near Hamilton, Ont. to adjust their headlamps before heading into dark, bushy trails. The deeper into the forested area they go, the darker it gets, so dark they see animals eyes glowing back at them.”It’s sort of a special thing we do,” says runner Ron Lariviere. “If you stop on the path, you see this little trail of headlamps coming towards you,” he says. Lariviere has been a bird watcher for years. As they take on the trails, he’s pointing out types of birds to his fellow runners as they go.

Lariviere has been running for forty years. With that comes a lot of experience. He’s experienced coaching kids, taking running vacations, running trails and ultras and many road races. His running has certainly changed over the years but right now, the 65-year-old runs twice a week (Wednesdays and Sundays) with his Running Room group that he leads. “It’s sort of a job obligation but these are my running buddies,” he says. It’s this same group that comes with him on their special trail runs in the conservation area to kick off their long weekends. Afterwards, they will have a beer to cheers to the run.

Lariviere started running in his twenties. “I was never into organized sports,” he says. “I decided I was getting out of shape. I would run a mile or two after dark and that evolved into five or six.” In 1982, he trained for the marathon. He didn’t know at the time that his running would take him to the Ottawa, London and Toronto Waterfront Marathons. He even did a 100-miler in the mountains in Vermont and completed his 25th Around the Bay 30K this spring.

When it comes to his routine, he’s got the running essentials down. Sunday long run? Check. Pre-race carb load? Check. When asked about his favourite recovery drink, he even manages to sum up so much about running culture in one sentence. “The most politically correct answer is chocolate milk but a favourite of mine is beer,” he says.

One of his most rewarding experiences for him so far has been coaching kids at the local school. “I knew the teachers who were runners. They said ‘Since you live in the neighbourhood, you should run with us,” he says. He did it for 20 years. “I outlasted those who told me to come out,” says Lariviere. While coaching, he would plan ways to make the workouts fun for young runners. One of his favourite games was creating a trail of popcorn with a series of dead ends. Student runners would have to follow the trail to find which route Lariviere decided to take. The runner who found him in the end was rewarded with the rest of the popcorn.

“You see the runners at their best,” he says. “It was so rewarding to see them out running in the neighbourhood.”

High school coaches also have the privilege of coaching young elites at the very beginning of their career and seeing them just as they are getting into the sport for the first time. Lariviere can relate to that. He was one of Reid Coolsaet’s first coaches. “He was one of those annoying skateboarders,” he says jokingly. “He’s a nice guy.”

The goal now is to keep running and to continue to enjoy it. It’s as simple as that. One of his sons lives out in Jasper. Maybe Lariviere will train to take on the trail together just the two of them, but that’s to be determined. Sticking with the Running Room group is a guarantee.

“As a runner, the finish line changes and the goal is always changing. At some point you realize it’s just a journey,” he says. “I don’t run as far or as fast as I used to, but there’s still something in it for me.”