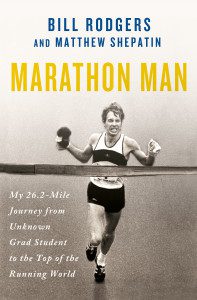 By Bill Rodgers and Matthew Shepatin

Marathon Man is the biography of one of the most intriguing and enduring figures in distance running – Bill Rodgers. Boston Billy, as he is known, is the humble, unassuming American who won four Boston Marathons (hence the nickname), four New York City Marathons and the famous Fukuoka Marathon in Japan, which at the time was the informal world championship race.

Rodgers and his co-writer, Matthew Shepatin, use his magical 1975 Boston Marathon win as the thread that binds his life story together. The biography begins with Rodgers as a young skinny runner with potential and follows him all the way through his career as one of the first great international running stars during a golden era of marathoning. Rodgers reveals how he became a champion – the hard way – with miles, miles and more miles, pure grit and, beneath his folksy boyish charm, a ferocious racing instinct.

“Being a runner means you are now free to win and lose and live life to its fullest.”

The book takes you back to a time before gps watches and premium cushioned trainers. Many who grew up reading about the running stars of the 1970s will already be familiar with Rodgers’s story. But Rodgers’s charmingly disarming tone in describing his experiences will lure in even the most knowledge- able running nerd. He comes off as that guy next door who you run with and grab a beer with after, only he happens to have won the Boston Marathon four times, and has plenty of exciting stories and wisdom about running and about life.

Regardless of whether or not you run fast, this is a great read for all types of runners, particularly during the pre-marathon taper. Caution: reading Marathon Man may make you want to ditch the lavish gear, grab a retro pair of sneakers, put on a Snoopy toque and hammer a 200k week, which wouldn’t be wise to do a few weeks before a marathon.