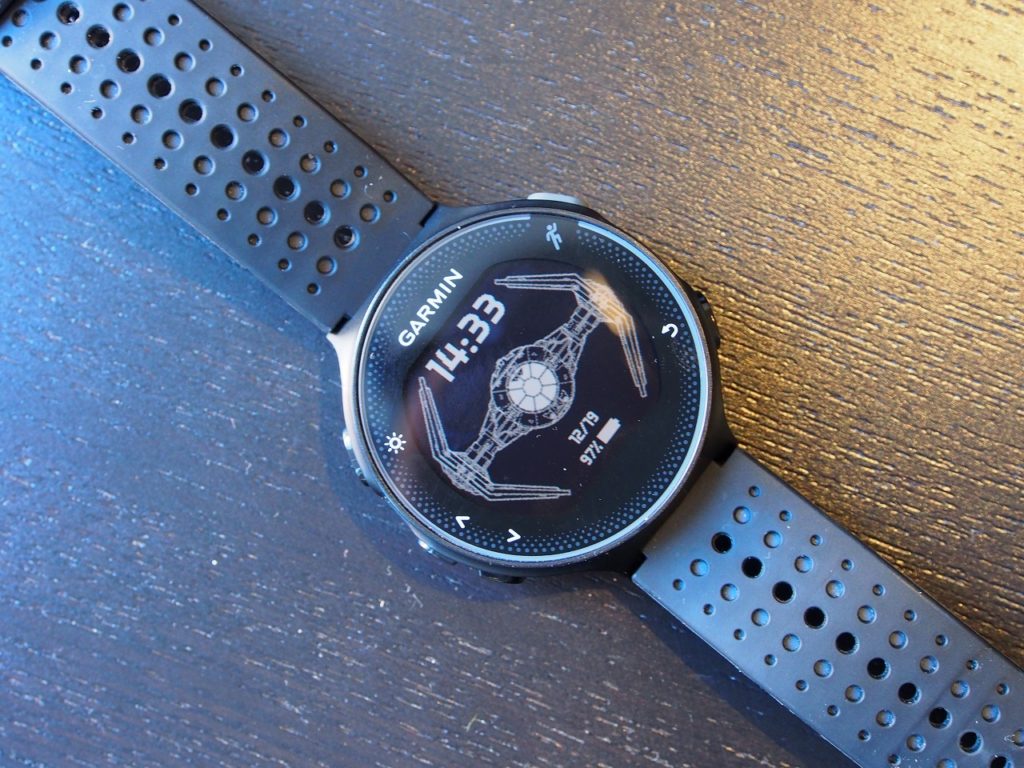 It’s been a full year since Garmin released the latest version of it’s popular and entirely running-focused Forerunner 230/235 GPS watch. After rigorous testing and plenty of kilometres run, we simply can’t recommend this watch highly enough.

Note: The Garmin Forerunner 230 and 235 are essentially the same watch, with the sole difference being the built-in wrist-based heart rate monitor feature included in the 235. As such, this review speaks to both models.

If you want a quick synopsis of this review, here’s a summary: The Forerunner 230/235 is quite likely the best all-around running-specific GPS watch available on the market today.


At $350 for the 230 and $450 for the 235, this is still a steep price to pay for a running watch. However, given its functionality and versatility, we’ll simply say it’s worth it. That’s especially true when you compare it to other similar models.

Let’s start with the appearance. The model is available in a number of exciting colourways which vary slightly between the 230 and the 235. So far, the options range from sleek and subtle to bold and vibrant. The watch face itself is no larger than previous models but the screen display is significantly larger. That means that more info can be displayed and it’s much more clear. The wrist strap is similar to the previous model in that it’s extremely light, flexible, durable and most importantly, comfortable. Altogether the 230/235 weighs in at 41-42g meaning it’s incredibly lightweight as well.

As far as function goes, this watch is simple, straightforward but yet still does it all.

Primarily designed as a running watch, the 230/235 tracks distance, pace, and time with the simple (double) click of a button. There are five data pages which can be customized to show specific info (like heart rate, heart rate zone and the clock page) and each has multiple data fields. The options of this watch allow runners to track almost anything about any given run including laps, lap time and distance, elapsed time, calories burned, etc. There are even cool new features such as the finish time estimator. That setting will predict how much time a runner has remaining until before hitting a goal distance like 5K, 10K, half marathon, etc.

Are you a sucker for statistics? The watch also provides some pretty cool post-run metrics including an estimation of your VO2max as well as a TE (training effect) score and suggested recovery time after each run or workout. Combined, these metrics not only give you a better sense of your fitness but also help you plan your training accordingly. It’s like having a personal trainer, in a sense.

As far as accuracy goes, the 230/235 supports both basic GPS as well as enhanced GLONASS which will reduce battery life, however it also makes for a slightly more accurate run– especially if you’re running in a densely developed area. In these cases, locating satellites takes mere seconds which means less standing around before your run.

Heading inside for winter? Indoor running is one of the watch’s default activities. We found it to be relatively accurate thanks to the unit’s built-in accelerometer. This won’t be quite as accurate as the GPS, but nonetheless it provides a very good estimation of your distance and pace. Note: We recently ran for 90 minutes on a treadmill and found the discrepancy of the watch and the treadmill’s odometer to be at least 5 per cent and as much as 10 per cent less than what you actually run.

RELATED: Why the Polar M200 may be the GPS watch that’s right for you

In addition to the running features, the watch also supports cycling and ‘Other’ activities like cross-training, strength-training or a yoga class. 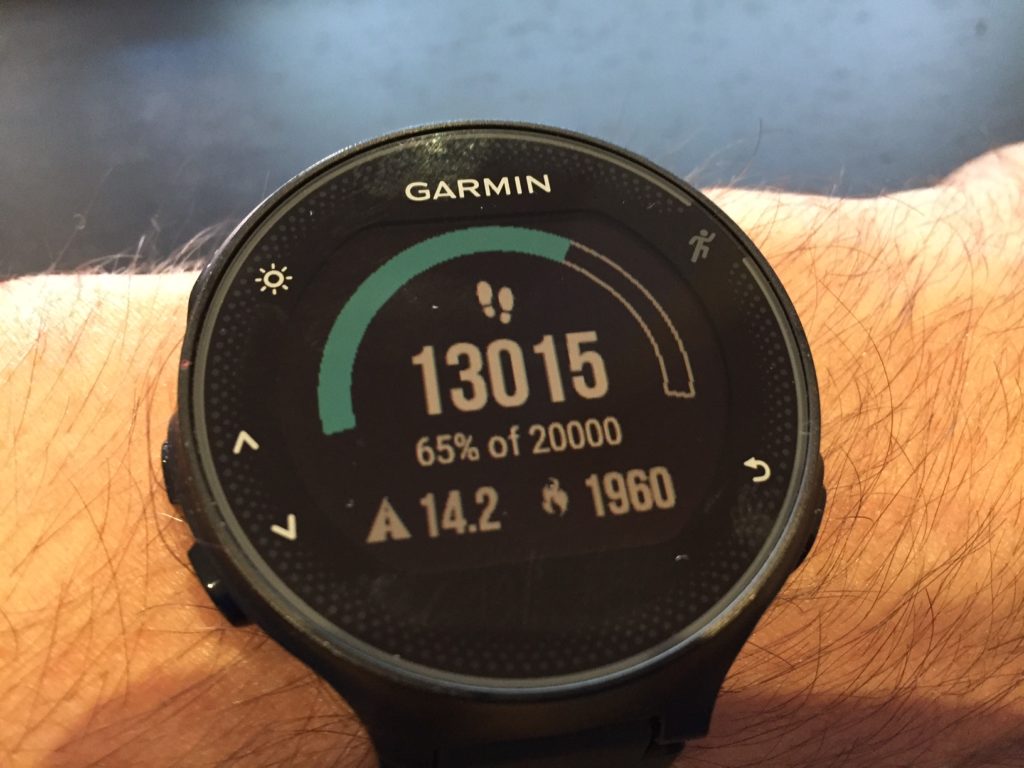 All in the details

The 230/235 is designed to be used with the Garmin Connect which can collect, analyze, categorize and share your data. It can also be automatically synchronized after the run.

A unique and handy little feature is that it’s also compatible with Connect IQ. That can be used to download customized watch faces, third-party apps and widgets. (We downoaded a number of creative faces including our personal favourite: the Star Wars Tie Fighter.)

If that’s still not enough, the 230/235 can send smart notifications– email, texts, event reminders– from your phone, has vibration alerts and can control music. This might be overkill for some, but for others, these additional features make this watch even more versatile.

Unique to the 235 is the ability to measure a runner’s heart rate at the wrist and in real time, 24/7. This impressively accurate addition means runners can do away with the sweaty chest strap.

The hardware itself and subsequent software updates from Garmin have made this previously uncertain technology a trusted and credible source of data. It does provide some wonky and frankly, wrong data from time to time, but over the long term, the numbers and trends definitely ring true. From tracking your resting heart rate through to your hardest workouts, the data provides valuable insights into your general health and fitness level to aid runners in living and training better. 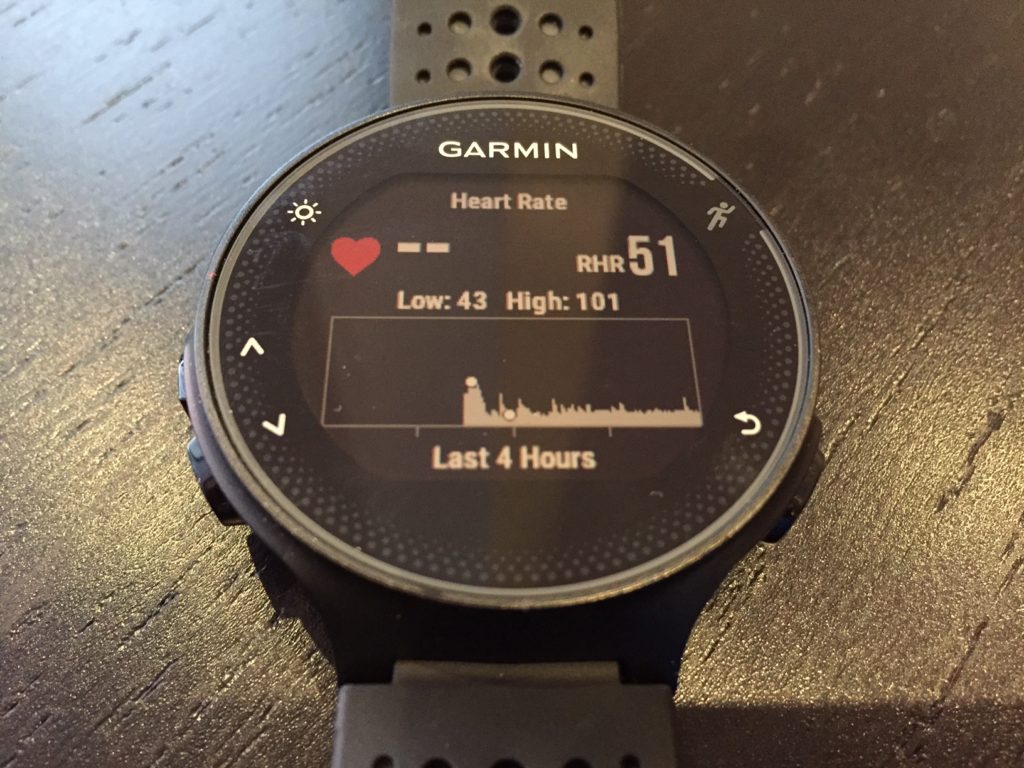 With the click of a button, you can view your current heart rate, resting heart rate, daily highs and lows as well as a graph that shows the last four hours. You can also get a useful weekly average and graph. Combined, this information can show you how hard you’re training and when you may be at risk of overtraining. A lower resting heart rate over time can also suggest that your fitness is improving. We truly feel that this feature is well worth the added price. 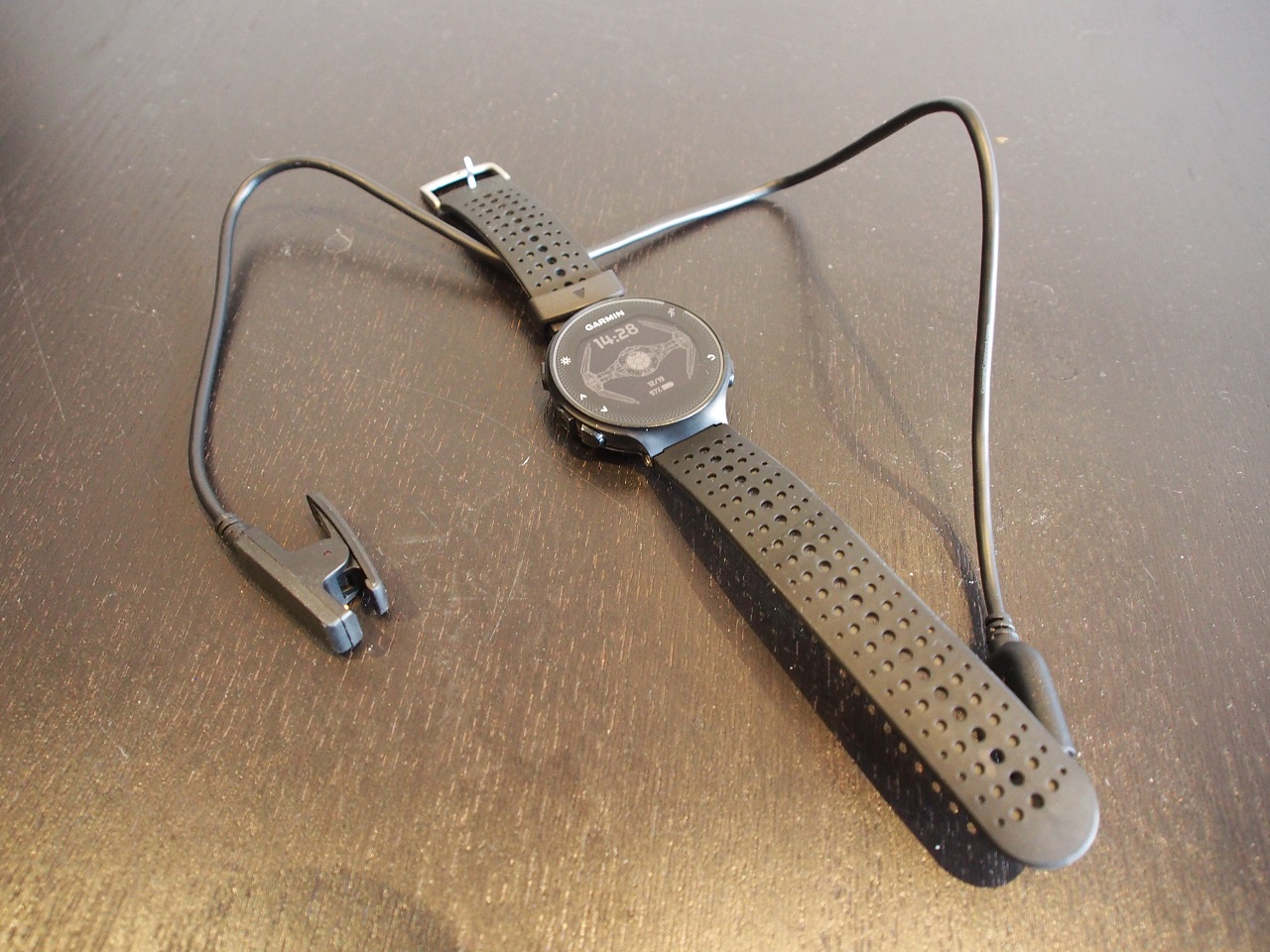 Not so fast! The watch has a few small issues

One (seemingly minor) drawback is that the charging cable fits the 230/235 (and also the 630) but not previous Forerunner models. The cable itself is also extremely short which meant that we had to take the watch off to charge it.

The battery life is a larger issue. It’s stated that the watch can last for 11 hours of continuous training or nine days if used only as an activity tracker with notifications and heart rate detection enabled. Turning off any of these features–as well as a number of other additional ones like Bluetooth–can and will greatly increase the battery life . Overall though, we felt that the suggested battery life was exaggerated. Using it to monitor one run per day with all the features on, we didn’t go any longer four or five days without having to recharge.