The Vancouver runner once struggled to complete a 10K. Today, she’s an accomplished ultrarunner. 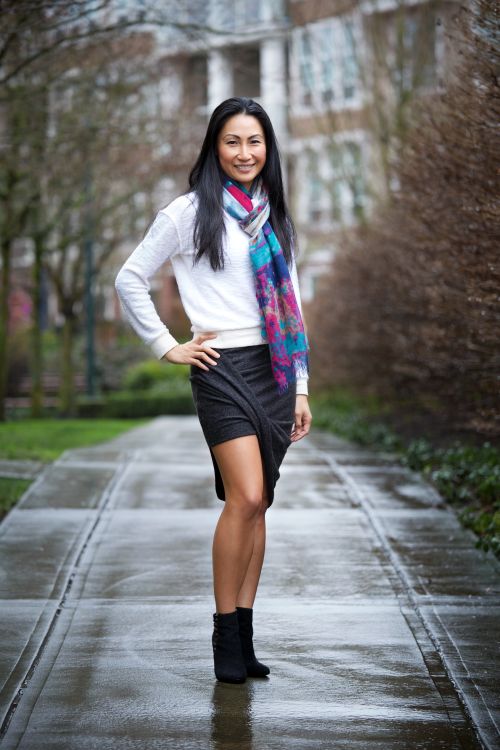 Born and raised in Vancouver, Linda Wong is a road marathoner and trail ultrarunner. She’s been a runner for the past 15 years and racing long distances since 2011. Even though she’s now run six 50ks, two 50-Milers, one 100k trail race, along with five road marathons, running wasn’t always a part of Linda’s life.

“I was never an athlete, it was not important to my family so we never did anything active,” Wong says. She only started running in 2001 when the company she worked for put together a Sun Run 10k team.

Linda only ran a few times a year back then to clear her head and was determined to do it even though she didn’t have real training. “I made lot of mistakes,” she now says, laughing at herself. “Buying shoes because they looked good, wearing the wrong size, and within the first couple of months of training I had issues with my ankle and IT band.”

She still did the race but ended up hating every second of it. “It was awful, I finished the Sun Run and I felt sick, went home, showered and slept for 13 hours.”

This is when she decided that 10k was too much and made the decision to start again at 5k and work her way up, with proper equipment and training. Eventually she got really into it. “I started getting addicted to running and ended up doing 31 races in 2005,” she says. “Those were short, 5 or 10Ks, but sometimes I raced two a weekend. I wanted to see how much I could push myself with short distances.”

Running this much and building a solid base led her to race her first half-marathon the following year and then train for her first full. This is when she discovered her love for the trails.

After struggling with injuries during road marathon training for a couple of years, Linda realized that the trails might be a great alternative. “I felt none of the pressure that I did when I ran road races.” she says. She ran her first ultra trail race in 2011, the Chuckanut 50k.

Wong is now an established runner in Vancouver and can be seen leading run crews all over the city. She is also one of the leaders of the popular Vancouver Running Company “Flight Crew” who run every Thursday night.

Skirt
I bought this skirt in Denmark. It was my first time in Europe and I was there because my boyfriend was running Ironman Copenhagen. I love clothes that are comfortable. Plus, it has a fun asymmetric hem line that’s also twisted.
Boots
I think clothing is a way to express yourself. I like a lot of basics and then add a little bit of extra to liven it up, like theses cute booties from Nine West.
Top
Aritzia
Scarf
The scarf is from Plenty and it was a gift from someone from my Robson Run Club, so it has a special meaning to me. 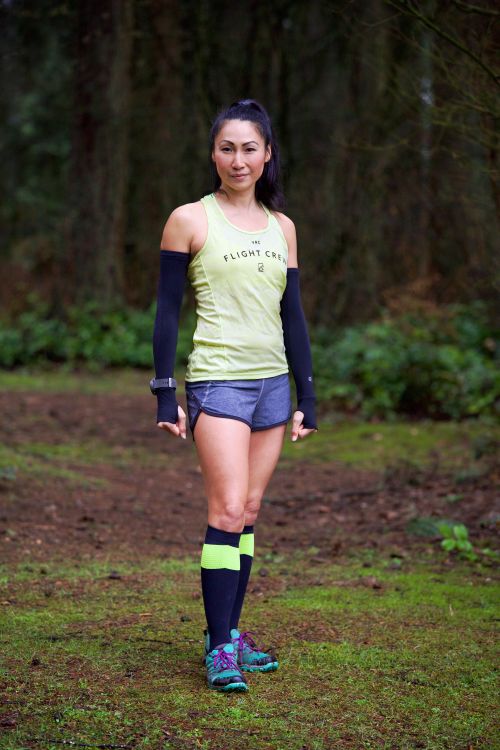 Shorts
Lululemon speed short. I’ve been wearing this model for 10 years, and swear buy it. I like freedom and flexibility with shorts.
Socks
Graduated compression socks from Tiux. I tried them out last year and absolutely loved them. I wear compression socks all the time, but for warmth, not compression. And with Tiux, the feet are not compressed.
Top
Adidas tank top from Vancouver Running Company. I’m part of their “flight crew.” I’m all about how things feel against my skin. When I shop, I’m always pointing out how items feel before I even try them on. It’s also light and surprisingly reflective.
Shoes
Inov-8 Trail Rock 245. When I started running I wore Cascadias, then moved over to New Balance 101. When I went up
in distance I figured that I needed slightly more cushioning, but with a similar heel drop, so I now run in the Trail Rock 245.
Watch
Suunto Traverse

Brice Ferre is an ultrarunner and photographer. He contributed the cover image for this issue.