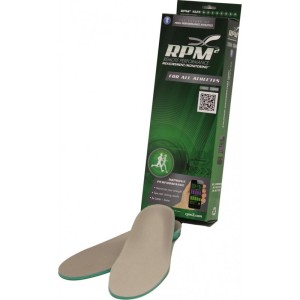 Johnny Ross had been an athlete all his life when, at 45, he had to have knee surgery. The rehab was a tediuous process and he knew there had to be a better way to go about it when he learned that most physiotherapy patients don’t actually do the exercises they’re prescribed. He saw an opportunity for a product that would give a user all the measurements of power and gait analysis a physiotherapist has at their disposal in a simple consumer product, so the CEO of MedHab set out to design a power meter for runners. That idea became RPM².

Recently featured in our gift guide, RPM² is an insole that takes measurements of a runner’s gait and movement on the fly. Just like any other insole,it fits easily into your shoe. It then connects with a smartphone app. That app then tracks the force in your foot on three different axes, gives a simple gait analysis and analyzes power distribution. It does all this from sensors in the footbed.

“As soon as you run, within seconds, the data appears right there on your smart device, all of which can be easily transmitted to a coach, wherever he or she may be,” says Ross. “Geography is no longer a barrier to being coached with the use of RPM2.”

Michael Johnson, the world’s fastest ever 400m sprinter, has adopted the product for use in his business, Michael Johnson Performance.

“With the product, we see tremendous potential,” says Michael. “We’re focused on the speed, strength, power, agility. So, we measure everything which gives us a try look at exactly how efficiently the athlete is moving, not only for improved performance but for reducing the risk of injury”

Johnson, someone who for over two decades has been involved in the pinnacle of sport, hadn’t seen a product similar to Ross’s.

“We’re looking for anything that gives us a better understanding of the athlete, and this tool allows us to do that more effectively.

At $600, the product isn’t cheap, but if you find yourself injured each year anything that might keep you away from the physiotherapist will catch your eye. Keeping an watch on your gait and strength, all from your phone and with insoles you would be wearing anyways, just might help.