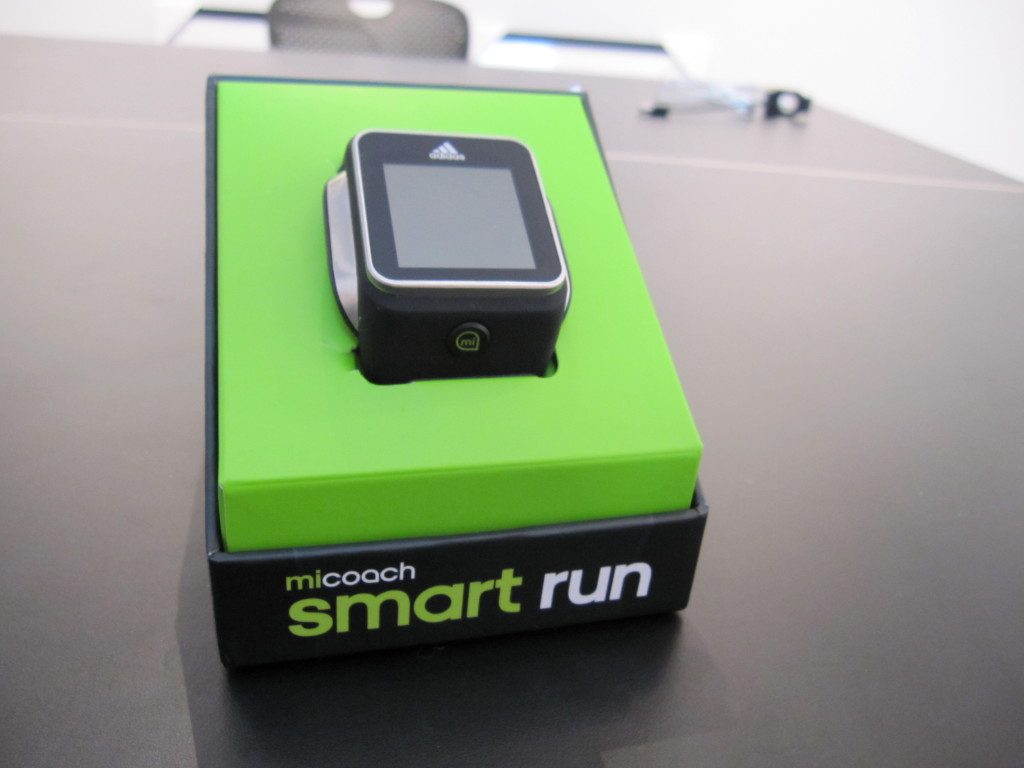 The Adidas MiCoach Smart Run training watch is an example of where wearable technology is going, and it does it pretty well.

We first had the chance to take the MiCoach for test in the fall of 2013, but after a few months it’s time for a bit more hefty of a review.

In summary, before we get carried away, the watch is great. It’s what you can expect to see more of in the next couple of years from wearable technology.

The most striking feature when you open the box is that the MiCoach doesn’t look anything like a traditional GPS watch. The watch looks, and functions, a lot more like you’re touchscreen phone than it does a sport watch. It’s akin to a touchscreen iPod nano strapped to your wrist that does much more than play music, although it plays music just fine also. The interface will feel very intuitive and the watch does everything you expect from a top-shelf sport watch, although it might not be great for all circumstances.

If you’re interested in the basic spec rundown, the watch packs a pretty serious punch. It’s run by a 1.2GHz dual-core Texas Instruments processor, 512MB of RAM, and 4GB of storage (although only 3GB is accessible to users). There’s a physical USB connection that uses a special clip on the back, similar to some other GPS watches we’ve seen in the past, for charging, but all the other music playing and syncing can be done wirelessly. The GPS chip in the watch also runs the Bluetooth and Wi-Fi for syncing with your computer or playing music on Bluetooth headphones.  The watch runs a customized version of Android, which for some may be exciting as it opens up the potential in the future for developers to write apps to run on the watch if someone were interested enough. The watch could do a lot more than the already impressive software allows. Also stuffed in behind 184 pixel by 184 pixel screen is an accelerometer and a heart rate monitor. All in all, the processing power in the watch isn’t far off that of the computer I’m using to write this review. 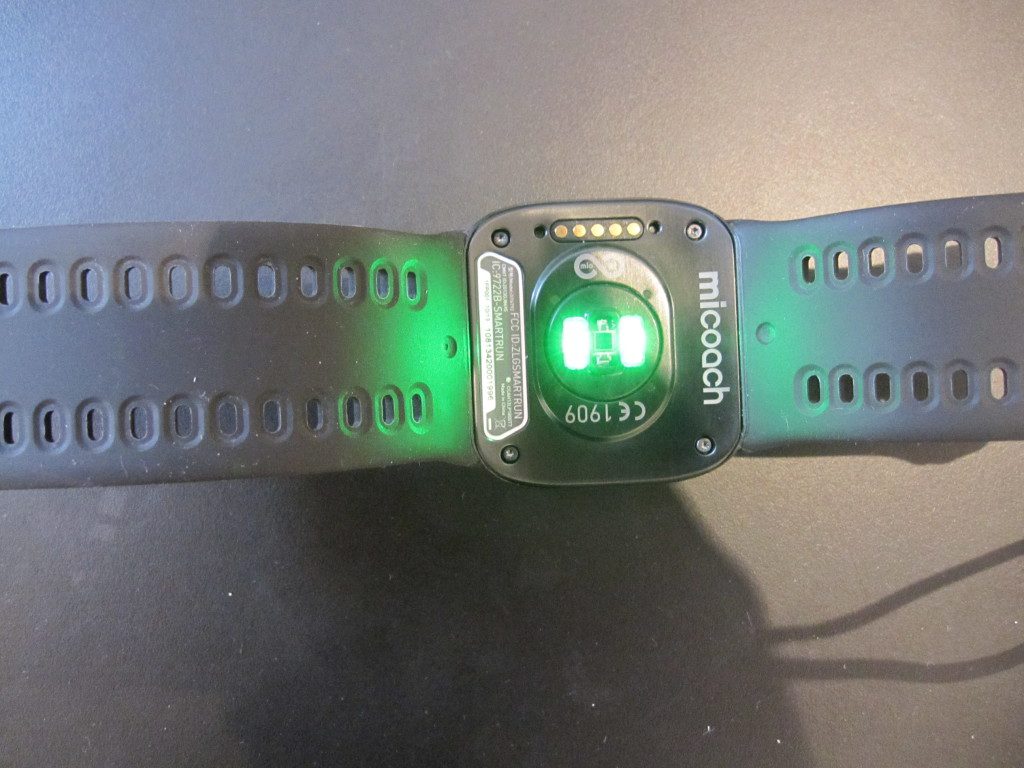 Also when you open the box you may be surprised at the lack of chest strap. A watch with a heart rate monitor usually has one, but the MiCoach doesn’t. That’s because it uses a touchless heart rate monitor at your wrist. On the back of the face is a small laser that tracks your pulse. Yeah, it tracks how fast your heart is beating with a laser on your wrist.

The Bluetooth works smoothly and the watch reads you pace, distance and other stats right in your ear if have Bluetooth headphones synced.

For a watch, it’s a bit bulky compared to regular sport watches, but it’s about the size you would expect from a GPS watch.

It’s rated as IP7 for how water resistant it is, meaning it’s supposed to be waterproof up to one metre of depth for 30 minutes, so you can’t go swimming with it on, but it’s fine in the rain and should be fine in the shower, although Adidas doesn’t recommend wearing it in the shower. Rain does cause a problem with the touchscreen, making it less responsive. Imagine a bit of water on the front of your touchscreen phone, only with a 184 by 184 pixel screen. It reminds you there is something useful about physical buttons, which brings forwards another issue.

If you are doing harder, fast intervals, the touchscreen can be a nuisance. When you’re tired towards the end of difficult workouts, fumbling around with the interface and touchscreen can be tough. There is a basic split function and workout timer with a real physical button to stop and start the timer, but anything more can be a hassle. Of course, some other GPS watches struggle with basic split function as well, and that’s not what the main purpose of the product is.

Battery life isn’t great, but that’s no surprise given how much is being powered by the tiny battery. It’s certainly not a watch you wear around all day. A long run using the touchscreen, GPS, Bluetooth and heart rate monitor should be fine, but you’ll be approaching the battery life. It will last you a few days without all the features turned on, but these are features that suck up a lot of energy. It’s the same reason your cell phone rarely lasts a day anymore. 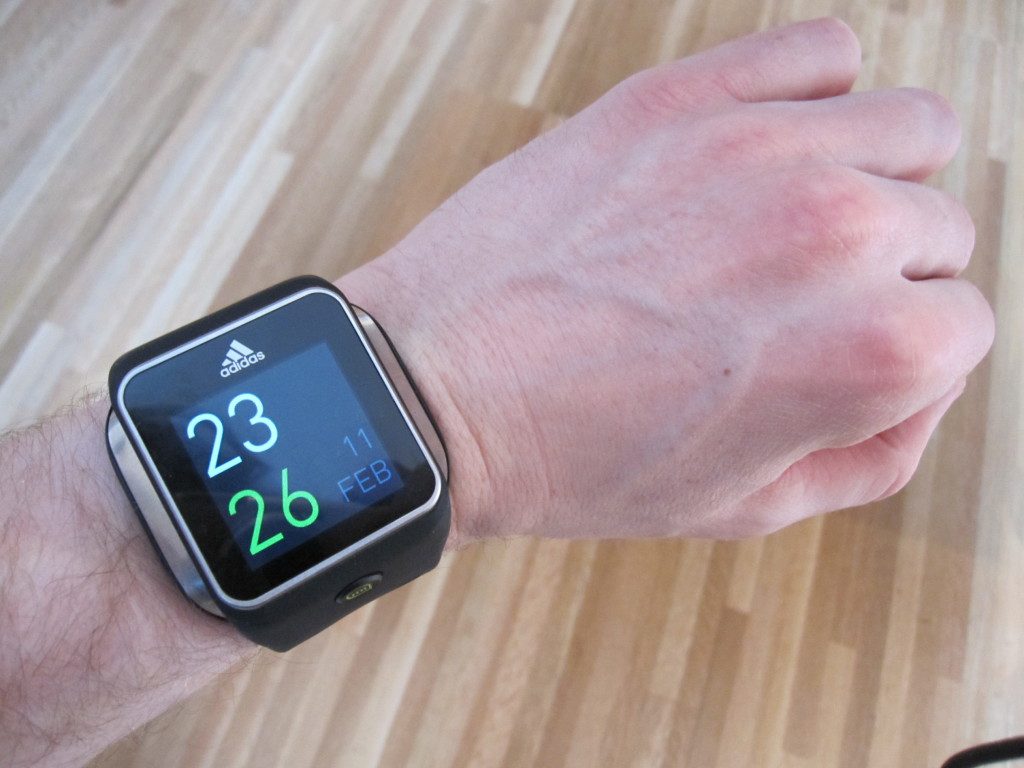 The web interface for tracking your progress is powerful, but it doesn’t seem to be tracking anything different from what other companies have been offering lately. A neat feature is the ability to customize the viewing fields of your watch from the web client. If you want to display more or less information on the watch’s screen, you can customize all that from the website. I couldn’t find a way to do this from within the watch’s interface.

Overall, it’s an impressive gadget. It feels more like a watch from Robocop than it does something for wearing out on a run. It’s intuitive, the touchscreen is smooth and it leaves almost nothing to be desired in terms of hardware.

At $400, it’s not cheap, but given everything packed into the device it’s also not unreasonable. The price may be steep for someone who doesn’t have a use for all the functions the watch offers, but it’s tough to imagine spending less on separate devices to cover all the same bases.