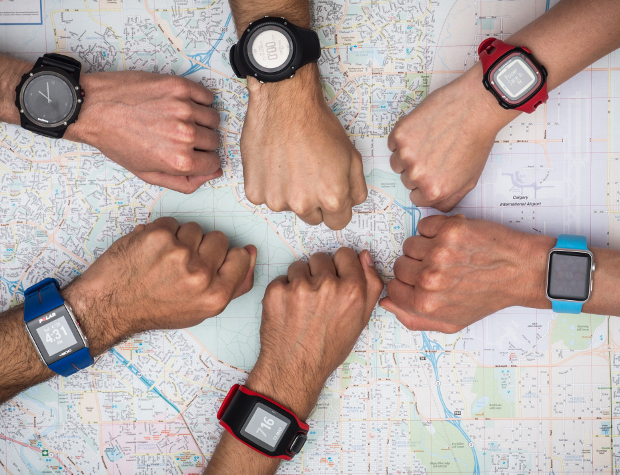 Running watches are getting smarter,tracking so much more than just your run

THE BOTTOM LINE The Ambit3 is a solid premium watch, but feels like a product caught in transition. If you’re looking for a powerful watch that does multisport well and has most of the bells and whistles for trail nerds, the Ambit3 is a solid option. But if you can wait out the 12–14 month cycle Suunto seems to work on, the next incarnation may offer more of a value upgrade and it might catch up to the competition.

$500 ($560 with heart rate monitor)
Who’s it for?
Runners who need a fullyfeatured watch and dabble in triathlon.
Key features

THE BOTTOM LINE The V800 is a quality, current generation fully-featured GPS watch. At $500, it’s pricey, but Polar have also shown a big commitment to pushing the device’s software to be the best watch it can be.

THE BOTTOM LINE If you don’t mind the size and plan on doing more than just road running, the Fenix 3 is perhaps the single most impressive sports watch available right now.

Is the Apple Watch Right for Runners?

$520
Who’s it for?
Runners looking for a robust smartwatch first and a hardcore running watch second (for now).
Key features

THE BOTTOM LINE Although the Apple Watch is not purely for runners, its powerful platform and appeal to developers to build and improve upon apps will make this an increasingly alluring option. If this watch were to have a GPS unit, it would be easily the most interesting option on the market for most athletes. As it stands, the Apple Watch has promise, and the sport model is certainly runner-friendly.

$220
Who’s it for?
Perfect for someone new to running, or an experienced runner looking for a budget GPS watch that is willing to sacrifice features. Also ideal for those with a smaller wrist, as it comes in two sizes.
Key features

THE BOTTOM LINE Although we wish it could display three units of data and had Bluetooth sync capability, the FR15 is an incredible value for a GPS watch. It’s basic, but will satisfy many runners with its accuracy and simplicity.

$300
Who’s it for?
The everyday runner, particularly one who trains using heart rate monitoring but doesn’t enjoy wearing a chest strap.
Key features

THE BOTTOM LINE Along with the Garmin FR220, the TomTom Runner Cardio is the best midrange option on the market. It’s a great everyday running watch with heart rate monitoring baked in. It’s well designed, easy to use and was built for serious use.