The Brooks Aurora looks like the offspring of Yeezys (Kanye West’s Adidas sneaker line) and moon boots – two very trendy pieces of fashion footwear, combined to make a futuristic-looking running shoe. The Aurora was inspired by the Apollo 11 mission, brought to Earth to deliver “a gravity-defying feel.”

The biggest tech improvement in the Aurora comes from Brooks’ nitrogen-injected midsole and independent forefoot and heel. The midsole is well cushioned, with impressive responsiveness, and the ride feels incredibly natural, thanks to the decoupling of the front and back of the shoe. With a futuristic look and effortless ride, the Aurora is ideal for the speed-oriented runner. 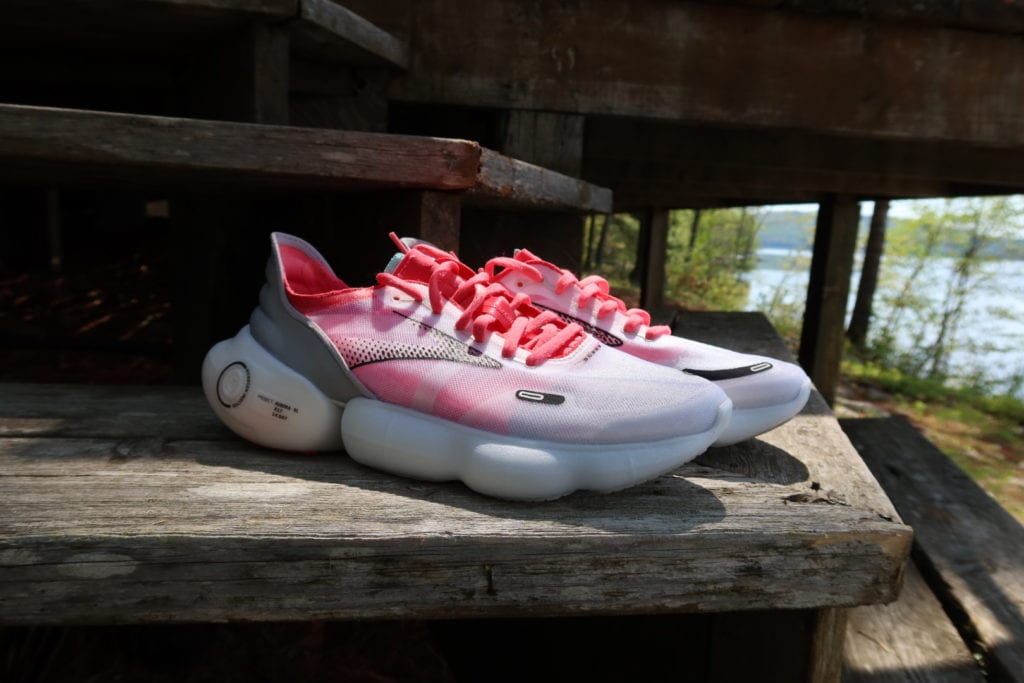 The Aurora’s sleek and minimal upper keeps in line with the shoe’s overall vision – to be comfortable, effective and modern. The soft and pliable heel counter helps protect against hot spots and is extremely comfortable from the word Go. The upper itself uses a midfoot sleeve with a mesh overlay to secure the foot. The laces are nice and long (short laces are the worst), and the midfoot sleeve hugs the foot nicely. As a runner with a very narrow foot, I found my heel slipping a tiny bit, but I’d attribute that to the size I wore. The Aurora runs a little large, so I’d go down half a size in the future. 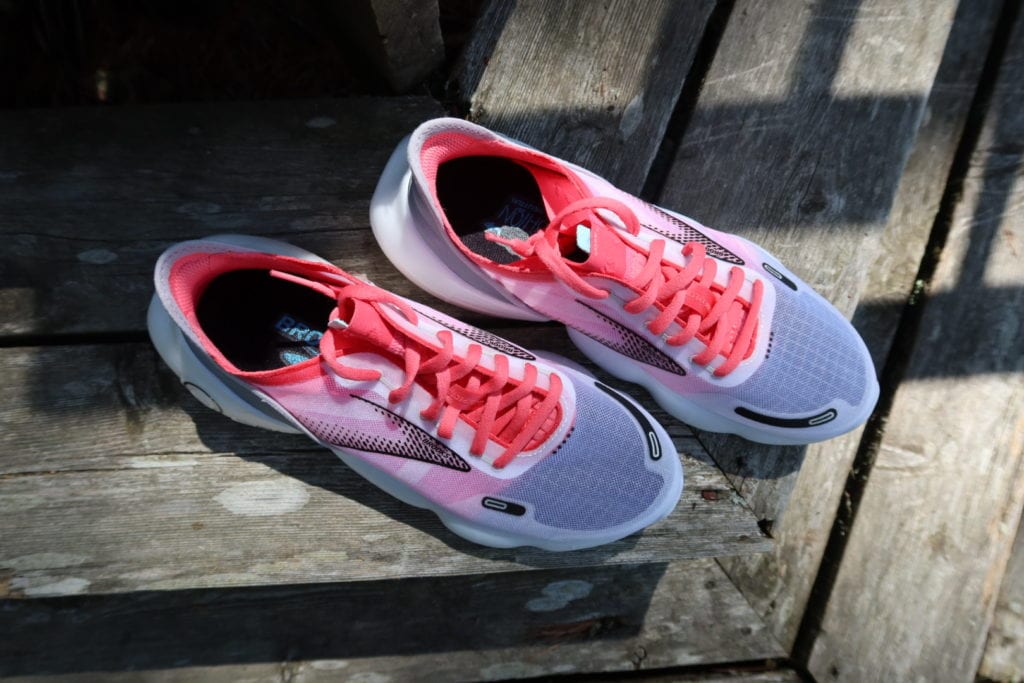 The midsole is where this shoe shines. Brooks’ DNA Loft is an EVA foam infused with nitrogen gas, giving it a highly responsive feel. The Aurora’s midsole really looks like the Nike Free re-imagined, with its large groove that separates the forefoot from the heel. This separation allows for natural movement, and Brooks’ Glide Roll Technology rocker system supports smooth transitions that help you feel like you’re cruising along with minimal effort (which is every runner’s dream). I found that the faster I ran, the more I was able to maximize the effect of the decoupled midsole. 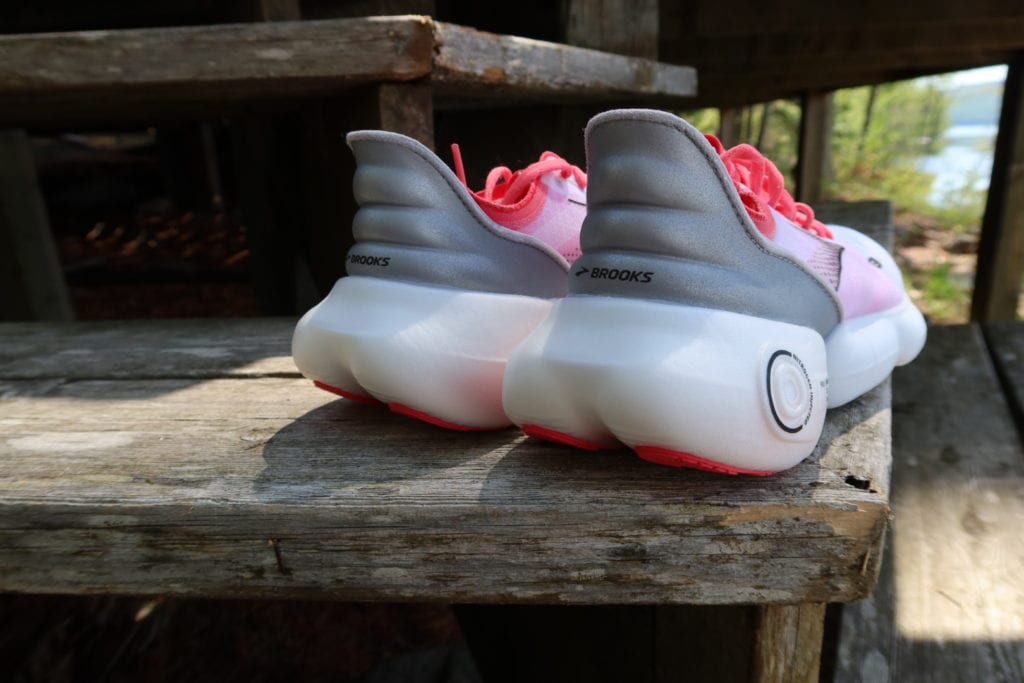 The Aurora’s outsole is super minimal. With only a thin, 3 mm layer of rubber in a few very select (high-wear) spots, the Aurora isn’t weighed down by any extra material. I tried this shoe on the road, track and trails and found it performed best on the road. It handled well in slightly wet conditions, and in dry as well. I didn’t love it on gravel, as rocks could get stuck in the groove between the forefoot and heel sections of the midsole. 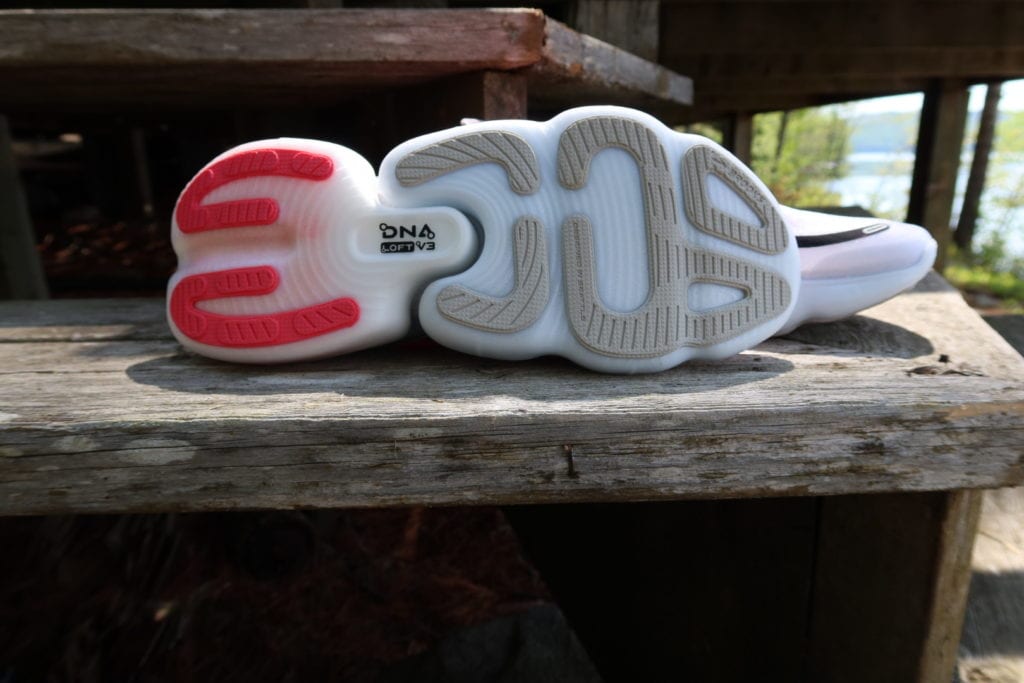 This is a road running shoe that feels better the faster you run. I was lukewarm on the Aurora before I got up to speed, but once I did, I loved it. My ideal use for the Aurora is a tempo or hard long run. For me personally, I found it a little firm for a recovery day, and too much shoe for speedwork on the track. But if you’re a road runner looking for an all-around workout shoe, the Aurora could certainly have a place in your rotation.