Nike just released a crazy looking new running shoe. We got to take them on a spin in advance of their release. Here are our first thoughts: 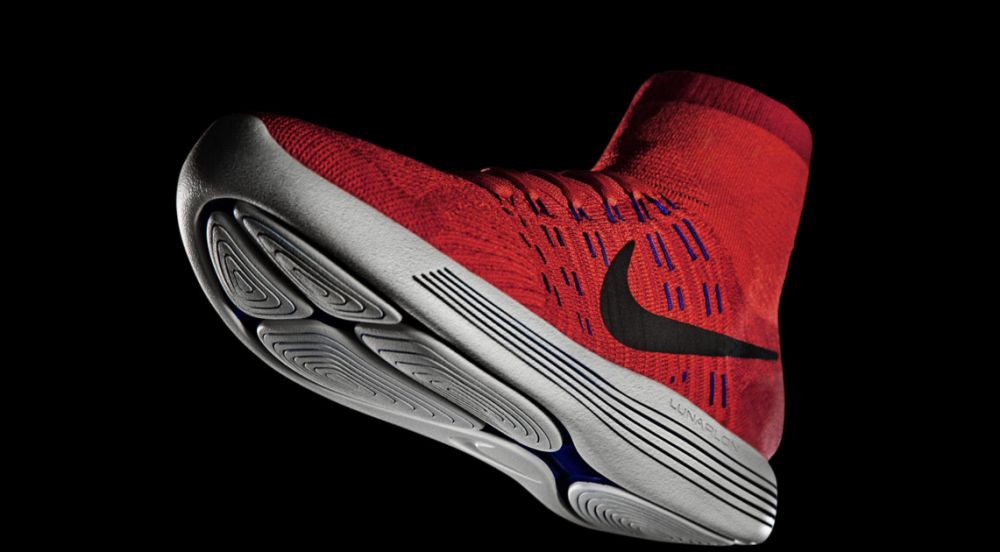 Just when you thought that running shoes all look a certain way, Nike goes and explodes that idea. The Nike LunarEpic Flyknit had the Oregon-based company’s design team take a long look at what a running shoe is, and then found themselves wondering, well, why does it look and function that way, and what could make it better?

After an 18-month design phase, the LunarEpic is sure to get runners talking. It’s easily the most interesting looking design we’ve seen in quite a while from a running shoe brand. But is it all style, or is there substance to this crazy looking running high top?

The shoe launched pretty much out of no where on Thursday. The ankle collar is the obvious standout design element. But there are many other new-and-improved aspects of this shoe, which fits nicely into their “Lunar” line of soft, responsive running shoes.

First, let’s talk about the built-in sock-like upper. If you’re into running shoes, you’ve heard the words “sock-like upper” many, many times before. This though takes it to a new level. 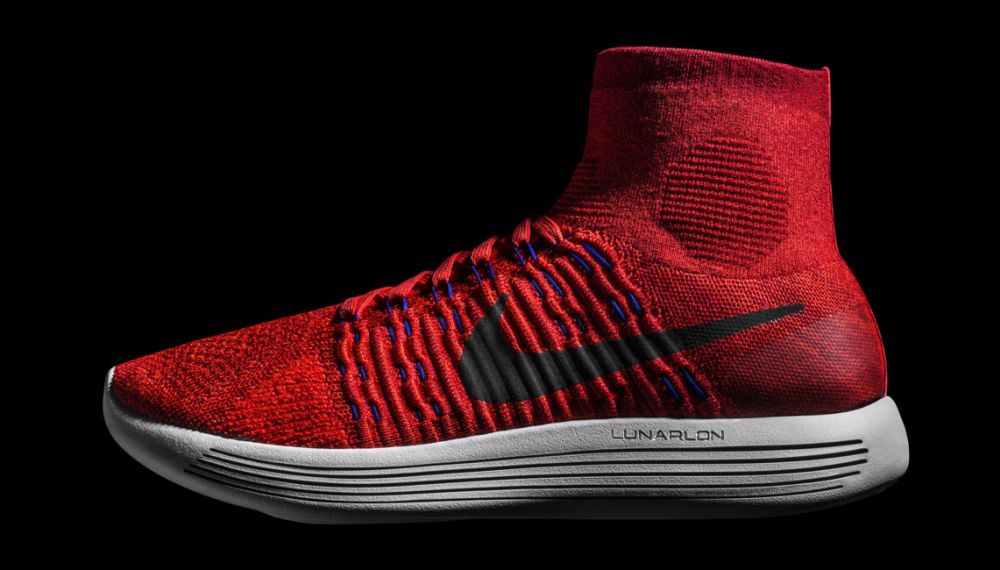 The first impression might be that it sort of channels the old school high top sneaker vibe but with technical running shoe features. The vanishing fit of the FlyKnit upper extends to entirely cover the ankle, which may sound like a potentially bad idea for those who fear chafing. The way to best describe it is that it looks like the sock has been included in the design but given more structure than your typical sports sock to offer more support.

But does it actually do that, though? That’s something we’re curious to see as we put more kilometres on the LunarEpic in the coming weeks (check back with us and we’ll do an in-depth review). After two 60-minute runs, our testers felt no chafing around the ankle (or anywhere, for that matter). In fact, the ankle upper wasn’t really noticeable at all, which triggers two thoughts: 1) that’s a very good thing, because this should would have been a failure if it caused any sort of irritation or felt like it got in the way of your run in any way; and 2) what’s the point of the built-up material wrapping around the ankle? Apart from aesthetics (and the LunarEpic is a stunner), it remains to be seen if the upper design does in fact provide a more stable ride. We’ll circle back after more intense testing to let you know. All we can say now is, so far, so good.

One thing we will say is that because of the higher build, this shoe won’t let in dirt or snow so it’s going to be a solid pick for wearing in  debris-filled or snowy conditions. That said, our couple of inaugural runs (one indoors and one on a treadmill) revealed that the FlyKnit upper is super-breathable, which will be fantastic for spring and summer, but requires a warm sock in winter.

The inspiration for this design element was the Nike Magista–the brand’s soccer cleat which is designed to have the foot, ankle and lower leg work together. And because of this design and the seamless construction, runners could easily go barefoot inside the LunarEpic if they choose.

As for the rest of the upper, most runners like customizing options and this upper has been created to do exactly that. Nike’s FlyKnit system connects at the laces, and you can really get in there and fine tune your fit. Pulling tight around the top lace, for example, results in the shoe snuggly closing in around the midfoot. In our discussions with Nike’s product expert, they indicated that the company is moving away from “neutral,” and “stability” conventions, particularly with this shoe, believing that their newer technologies will allow pretty much any runner to find their favourite fit and style and then tweak it to make it work specifically to their needs.

So @nike just dropped this insane looking running shoe the #lunarepic We got an advanced pair and took them for a run. Read our thoughts and see more photos on our site.

Aesthetically speaking, it brought us to what Nike has been doing so well with their basketball shoes, since, well, the Jordan. Those shoes were equaling appealing to wear on the court as well as in a more casual sense. We feel that the LunarEpic will have a similar appeal for sneakerheads. Fashion-forward sneaker savvy folks are likely to be caught wearing these as streetwear, not just for mid-week runs.

We’ve already mentioned that the LunarEpic is “interesting” looking. This is going to be a shoe for daring runners who aren’t afraid of change or trying on a bold look. It wasn’t so long ago that running shoes looked pretty uniform, dorky and clunky. That has changed and it’s because brands like Nike have been at the forefront of taking traditional running shoe concepts and pushing them off a ledge. With innovative designing like what we see in the LunarEpic, running has finally made its way into the fashion world in the last few years. 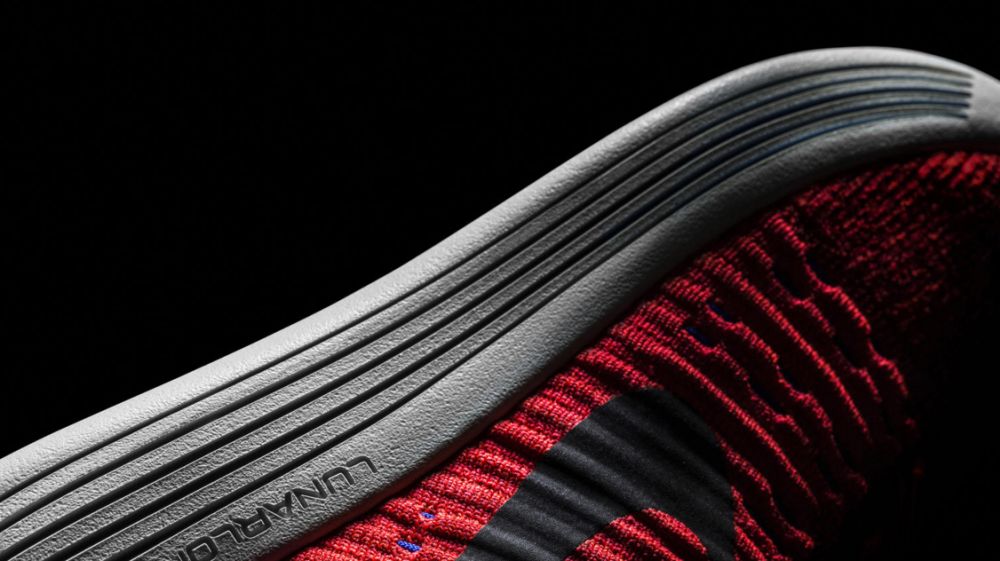 The midsole and outsole

Moving to the midsole, runners who know Nike products will be familiar with the Lunarlon midsole and the other models in the Lunar subgroup. Running in the LunarEpic, we felt the midsole was closer to the Nike Free in terms of a soft, tactile ride, than, say the firmer workhorse tech found in their Zoom shoes (the Pegasus and Vomero).

For the LunarEpic, Nike used heat instead of glue to fuse two foams together. Then, they laser-cut sections out of the midsole to make it feel more light, flexible and with a “accordian-like” responsiveness after touchdown on the road. After our initial tests, the LunarEpic certainly did feel marshmallowy, yet did have a nice return upon toe-off.

One thing that Nike is doing here which, somehow, no other brand bothers doing is including two insert options–one providing a 6 mm drop and the other augmenting it to 10 mm. Having two options in one shoe is definitely a nice touch and something other brands could easily do, but don’t (yet). In order to accommodate both insole types, the LunarEpic does feel pretty roomy and wide in the forefoot. It wasn’t quite a half-size too big, and is certainly runnable at true-to-size, but its something to consider when trying them out at a store or ordering online.

One of the most impressive features of the LunarEpic is the sole. Here, Nike has cut in five pods (one in the heel and four at the forefoot) which give runners responsive cushioning and traction as they splay open during contact. Simple, yet clever design. 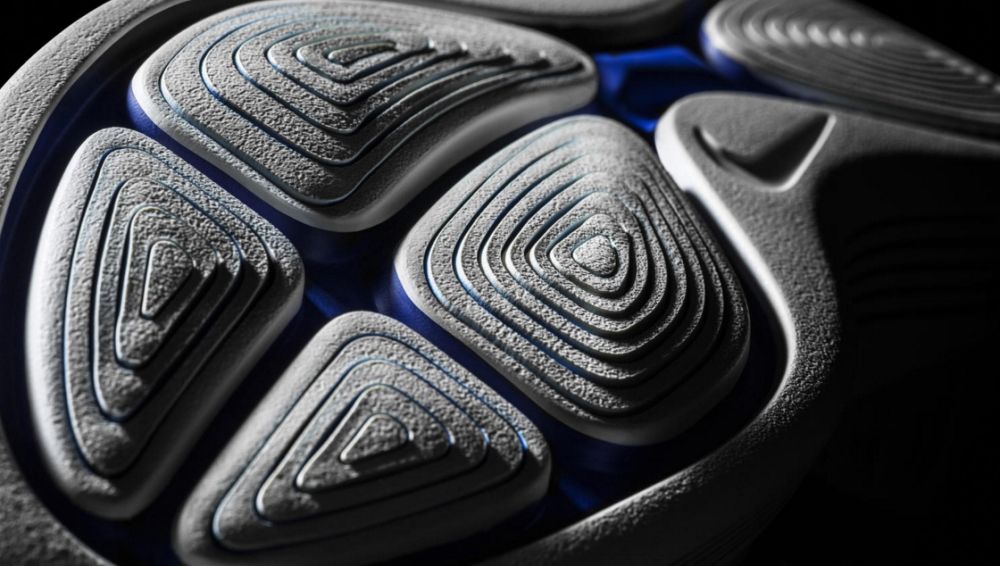 Nike went through several different patterns to determine which worked best (their product expert even showed us a neat grid of the various iterations). The geometric pattern that rose above the rest is a series of rain-drop sections with several ripple-like indentations. When the foot hits the ground, each of these pods move individually to increase traction upon impact. Runners should feel an easy, distraction-free heel-toe transition. Our initial impression was that the shoe did not feel like it had five separate zones and acted in unity underfoot.

We’re pretty certain this shoe is going to create a lot of buzz, especially as spring approaches and you start seeing runners out in what will look like a pair of high tops. This, of course, is merely our first impressions of the LunarEpic FlyKnit. We’re looking forward to taking it through more intense testing to better understand how the shoe feels (and looks) after a couple hundred kilometres.