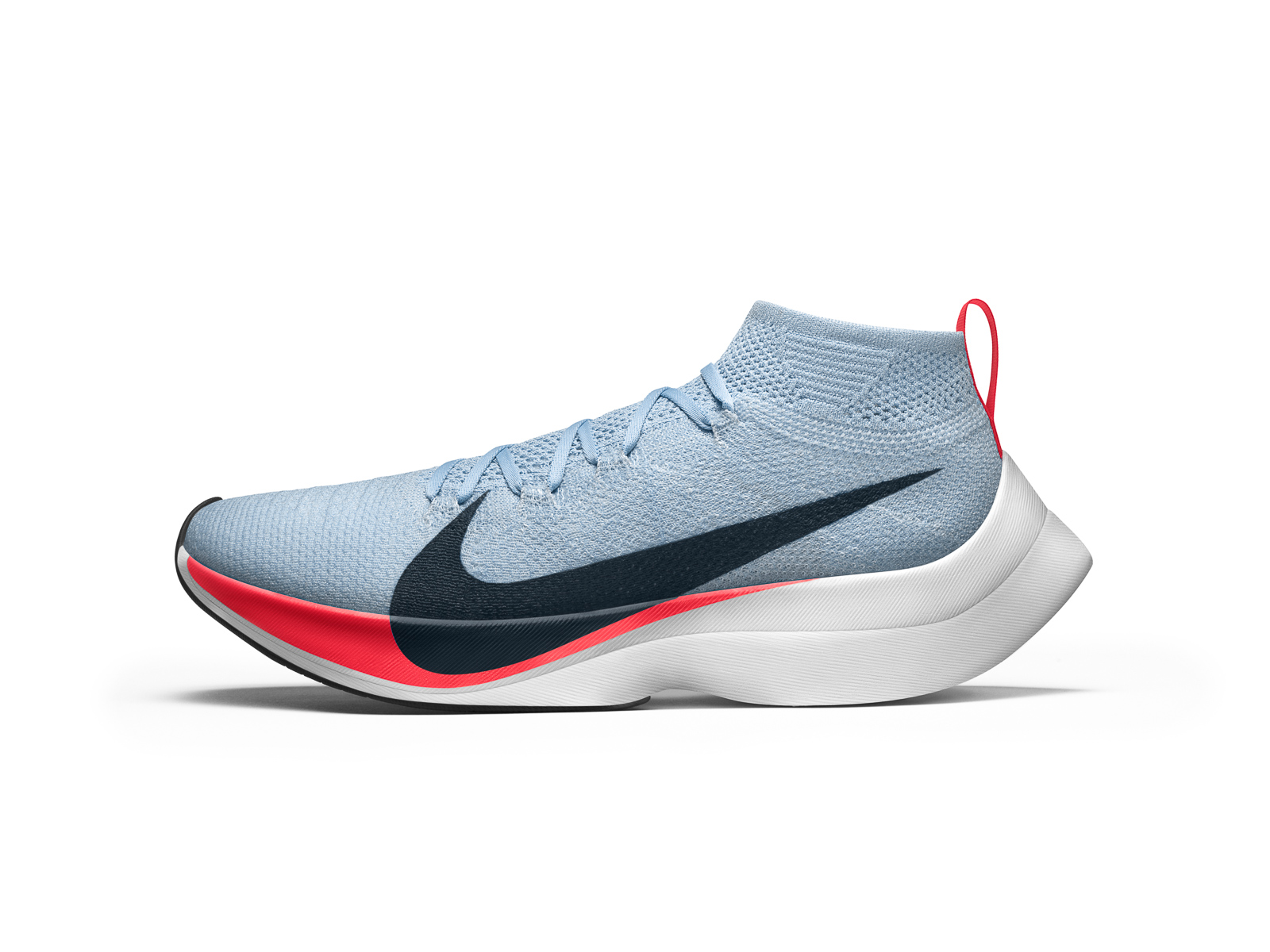 On Tuesday, Nike announced the shoe that they’ll pair with their athletes in an attempt to produce the first sub-two-hour marathon in history. In fact, not one but three shoes were born out of nearly four years of scientific study and secret testing.

The Friday before the announcement, we got sneak peek at the VaporFly 4%, VaporFly Elite and Zoom Fly. (A full gallery of photos can be found at the bottom of this page.) We also talked at length with Bret Schoolmeester, senior director of global running footwear at Nike, who has been intensely involved in the Breaking2 process since day one.

RELATED: Fittingly, Nike’s sub-2-hour attempt will be on an Italian race car track.

“The three keys [for the shoe] would be that it be lightweight, provide enough energy return and be aerodynamic,” said Schoolmeester of Nike’s plan to create the fastest marathon shoe in history. They took that idea in about 2013 and started doing some sketches, as well as picking the brains of athletes. “It sounded a lot like our track spikes,” said Schoolmeester. “We said ‘hey, let’s make a track spike for the marathon. And we began to wonder what that would look like and perform.”

But the athletes took them in an entirely different direction.

“They said, “Do not put me any closer than I already am to the ground,” Schoolmeester said of the initial feedback from the likes of their Breaking2 athletes Olympic gold medallist Eliud Kipchoge, Boston champ Lelisa Desisa and half-marathon world record holder Zersenay Tadese. Running 42.2K pounding the pavement was too much even for the most efficient runner. Lower and more minimal was not something their athletes across the board actually wanted.

That led to Nike’s first big paradigm shift early on in the development of the Breaking2 project.

“This shoe is much higher off the ground than a traditional racing flat,” Schoolmeester notes. The designers kept coming back to the question of creating maximal energy return. Since the beginning of specially designed racing shoes, it’s always been a given that they be as light as possible, and that meant cutting back on a bulky midsole to shave off weight. The barefoot movement also ushered in the notion that the lower the “heel-to-toe drop ratio” (amount of difference between where you forefoot and your heel rests in the shoe compared to the ground) the more it would mimic “natural” running. But Nike’s engineers had to accept that a thicker midsole stores and returns more energy, and also allows a marathoner to maintain a more efficient stride, also known as having good “running economy.” “By adding more material, there’s more compression and thus more return to the runner,” Schoolmeester said of their lab findings.

That revelation put the onus on their engineers to retain cushioning but still make the shoe faster than any racing flat in history. They they knew that meant they had to shave the weight of the shoe down to sub-200 g (7 oz.) for it to be light enough to produce a super fast time.

The commercial production model that will be available to consumers in June, called the Zoom VaporFly 4%, will weigh in at 6.5 oz. for a men’s 10. That doesn’t make it the lightest shoe on the market (there are a few racing flats designed for shorter distances that are quite a bit lighter), but it does place it in line with Adidas’ slipper-like sub-2 project shoe used at the Tokyo Marathon this year. Nike is extremely motivated to blast their main competitor out of the water with their new shoe. After all, Adidas has owned the world record for nearly a decade. The last several records have been broken with their Adizero Adios, dating back to Haile Gebrselassie in 2007.

The one major difference between the Nike shoe and Adidas’ new creation is that the former still offers a massive wedge of cushioning. They achieved this with a totally new type of EVA foam called Zoom X. It’s one-third the weight of their previous EVA, and delivers 13 per cent more energy return. “This is significant; in the past we’ve dealt with one to two per cent energy gains,” Schoolmeester points out. That was the first breakthrough that allowed their Breaking2 project to take off.

About that spring plate…

That high stack height in the midsole, led to developing the lighter EVA, which meant Nike now needed something to provide tension and stiffness in order to create more energy return. That led them to add a carbon-fibre plate, and perhaps the biggest U-turn in running shoe design since Hoka One One invented the “maximal” cushioning shoe was complete.

The designers again returned to the track spike, riffing on the plates they put in them to create tension and massive energy return. The one big problem was that their spikes aren’t designed for getting a runner safely past much more than 10,000m. “If you don’t get the stiffness profile correct, you shift it from your medial phalangeal joint to the ankle,” said Schoolmeester, causing a marathoner to start to become increasingly inefficient as the marathon takes its tole on an athlete’s body.

The Breaking2 shoe’s carbon fibre plate has an extreme scoop in the forefoot, which caused a stir last year when it was revealed that they’d filed for a patent for a “spring plate” in a shoe. Schoolmeester said that the plate won’t break any rules with the IAAF, the governing body of track and road running, and that Nike has been working closely with them on the project. There’s no mechanism that will spring the runner forward, but merely the stiff carbon plate will react to ground forces and the angle in which it’s placed in the shoe. “It gives the sensation that you’re running downhill all the time,” Schoolmeester said. Most importantly, when they measured their tester athletes in this shoe, there was no increased workload being put on the ankle. “It’s hard to run slow in this shoe,” Schoolmeester said. “It’s constantly propelling you forward.”

The 3 per cent problem

“The project was called “3%” from the beginning,” said Schoolmeester. “That’s because that’s been the difference between the current world record [2:02:57], and a sub-two-hour marathon. So we’ve been focused really on one thing since the beginning of this project, which is to make a runner three per cent faster.” The new shoe thus took on the cheeky name: Nike VaporFly 4%, showing confidence that it would deliver, but also reflecting third party testing, which revealed a solid four per cent improvement in running economy wearing the shoe. In fact, Schoolmeester points out that some of the athletes from the independent lab showed up to a six per cent improvement in their running economy.

And Nike hasn’t been shy about putting various versions of the VaporFly 4% out in the wild to see how they perform, risking discovery before they were out of the prototype phase. Nike athletes have been spotted with incarnations of the prototypes over the last few years, but Schoolmeester and the others on the project have kept quiet, as not to give away the details of their design.

“In the early stages of the project they didn’t leave campus for security reasons,” Schoolmeester said. “We knew by 2015 based on our lab results and athlete feedback that we had something.” That’s when they started slipping prototypes onto elites.

Secret shoes out in the wild

At the U.S. Olympic Trials in they decided to let their top contenders wear a low profile all-white version of the VaporFly 4%. “We didn’t want to hold this back knowing that it would be a serious advantage to our athletes,” Schoolmeester said. Galen Rupp, Shalane Flanagan and Amy Cragg all wore versions of the secret shoe. Cragg and Rupp both won the event, and all three scored spots on the Olympic team. Rupp was even able to run the U.S. indoor track championships just two weeks after his big debut marathon, and Schoolmeester said that a lot of that quick bounce back was due to the gentle nature of the VaporFly’s cushioning.

Kipchoge, who is one of the most consistent marathoners in history and no doubt the frontrunner to break two-hours, got his prototype two weeks before the 2016 London Marathon. He went on to run just eight seconds off the world record (2:03:05), again, wearing the VaporFly 4%.

Nike then swept the men’s marathon podium in Rio, with Kipchoge easily winning gold and Rupp picking up a bronze. All three were again secretly testing a version of the sub-two-hour marathon shoe. Other notable 2016 testers were Kenenisa Bekele, running the second fastest time in history (2:03:03) at the 2016 Berlin Marathon, Abel Kirui (winner at the Chicago Marathon) and Girmay Gebresalassie (who won New York City last year).

Some athletes have been a tough sell, unwilling to part with shoes that have worked for them in the past. Bekele, who holds the 5,000m and 10,000m world records, but is not formally involved in the Breaking2 effort, was still tapped to be a tester. “Beleke has tried a lot of different shoes, and he’s pretty picky,” Schoolmeester said. “He’s been slower to adopt some of our other models. But he loved it. He wore it in Berlin and Dubai. He’s given us really positive feedback.”

Schoolmeester says that Flanagan was the ultimate tester. “She’s pretty particular about her shoes, and we love testing with her for that reason.” Flanagan fell in love with the new prototype, so much so that she had anxiety dreams that Nike would take the shoe away from her and not let her race in it again. 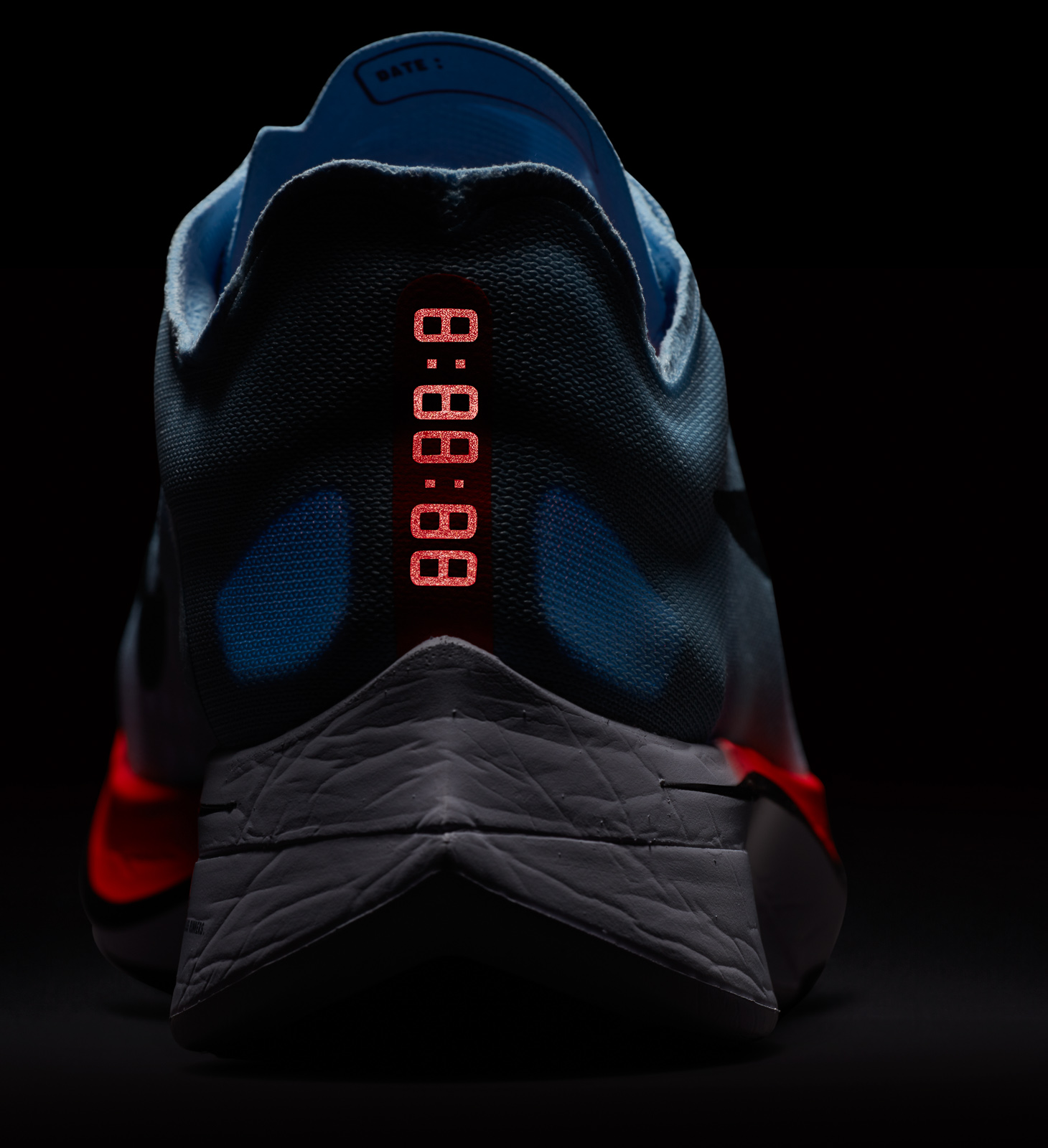 Custom-tuned shoes, fit for a Formula One Track

When the three selected athletes try to bust through the two-hour barrier sometime this spring on a race track in Italy, they’ll be wearing a special version of the shoe. The VaporFly Elite won’t be available to the public and will be “custom tuned” to each athlete’s foot. It also has even more extreme aerodynamic sculpting, particularly at the high, chunky heel, a slight cuff around the ankle for a more snug fit, and a fancier Atom weight Flyknit monofilament upper. There will also be a specific outsole for race day, “just like a race car switches out the wheels for the ideal conditions and the surface of the location,” Schoolmeester said. (The Nike Zoom Vaporfly Elite can be differentiated by its high-profile, sock upper.)

The VaporFly 4% will be available June 8 at a pricey US$250, so that you can shave off (at least) four per cent off your own marathon time. 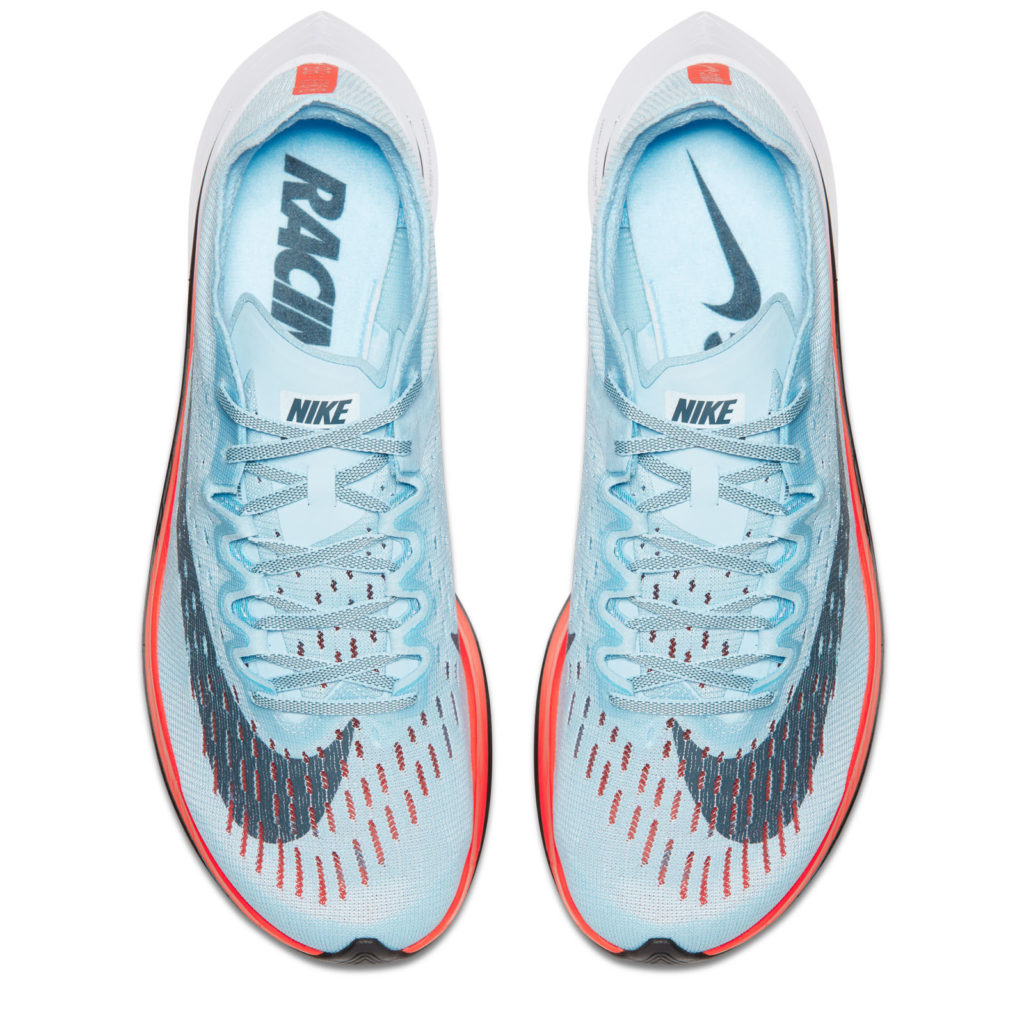 Nike Zoom VaporFly 4%'s outsole is slightly different than the Elite version, in that the latter will be customized for the Italian race track Nike will be using for the sub-2 attempt. 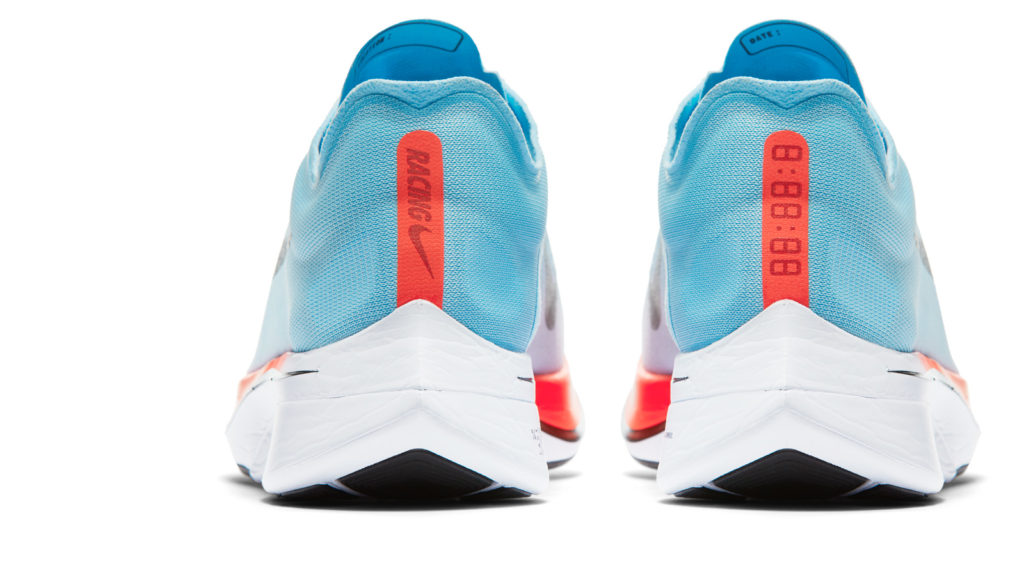 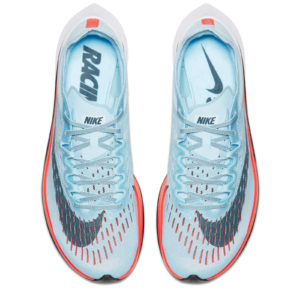 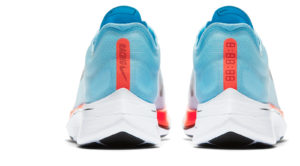 There’s also a third, less technically refined (and more affordable) version called the Nike Zoom Fly. It too uses a rather height stack height, 10 mm drop and plate construction (although the plate is only carbon-infused nylon instead of full-on carbon). At US$150, it’s more in line with the price of most premium trainers, and will be quite light (8.5 oz.) and provide more cushioning and energy return than Nike’s Pegasus, which is a shoe we’ve constantly reviewed well over the years. 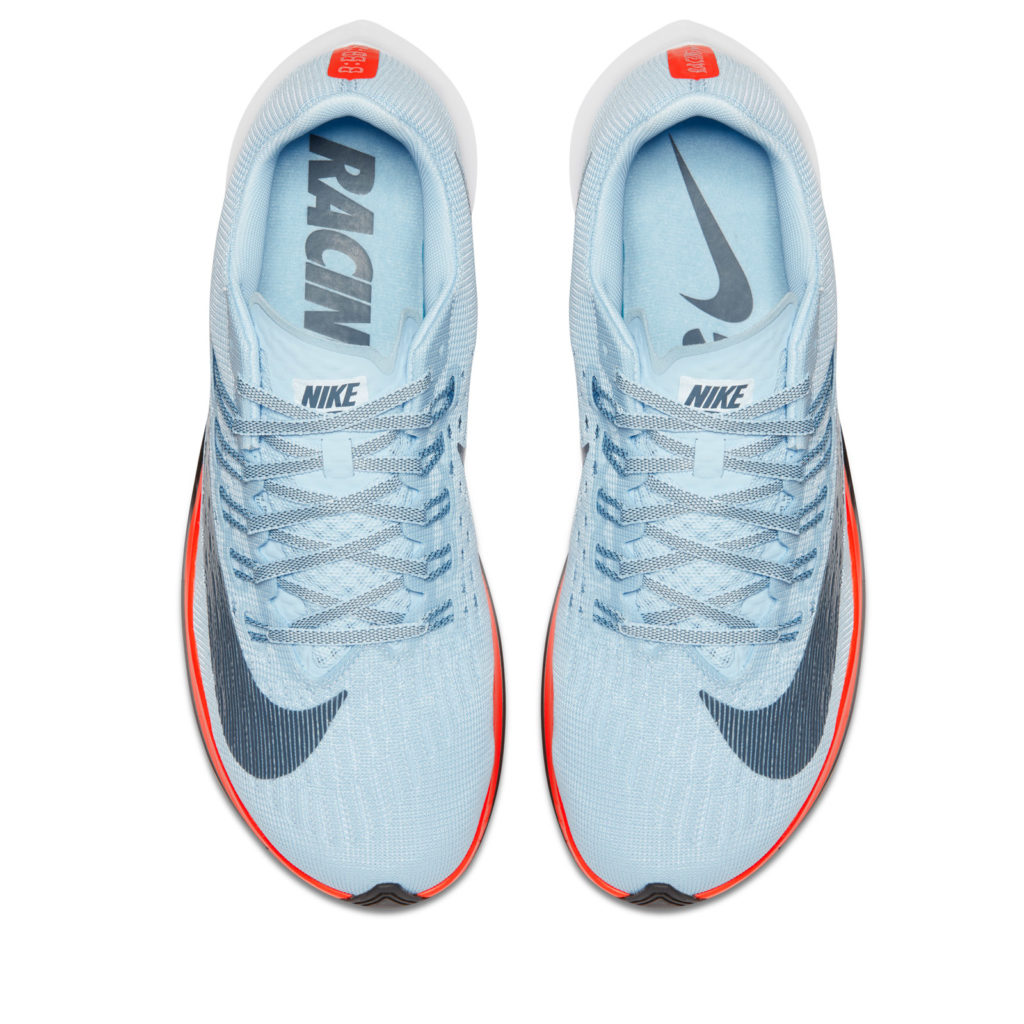 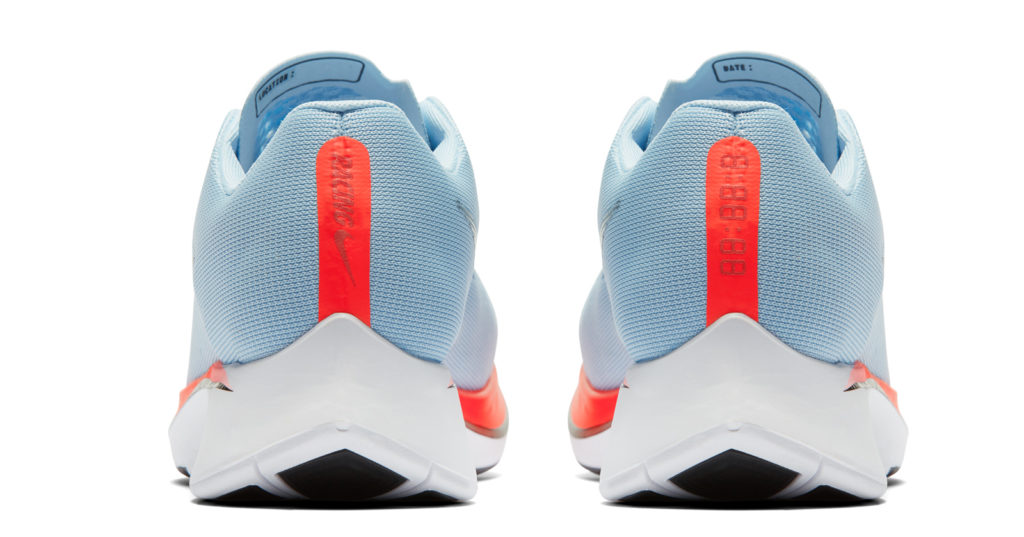 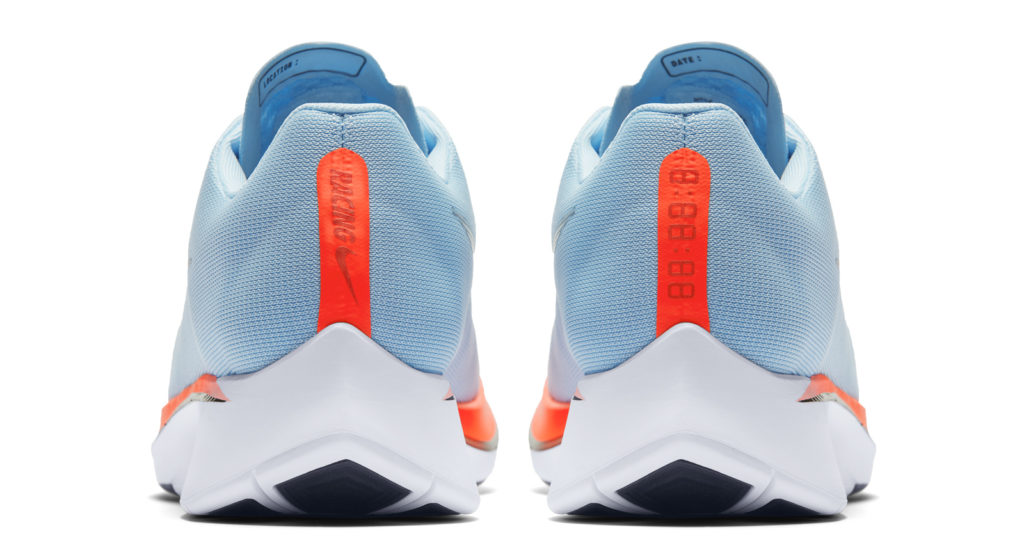 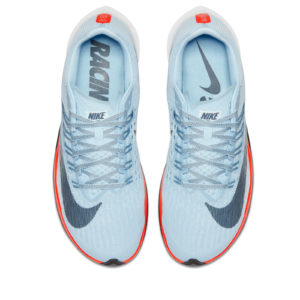 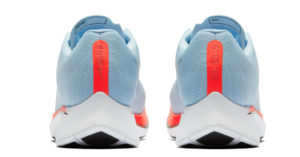 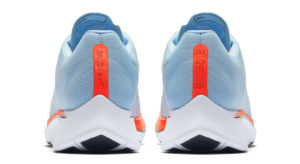