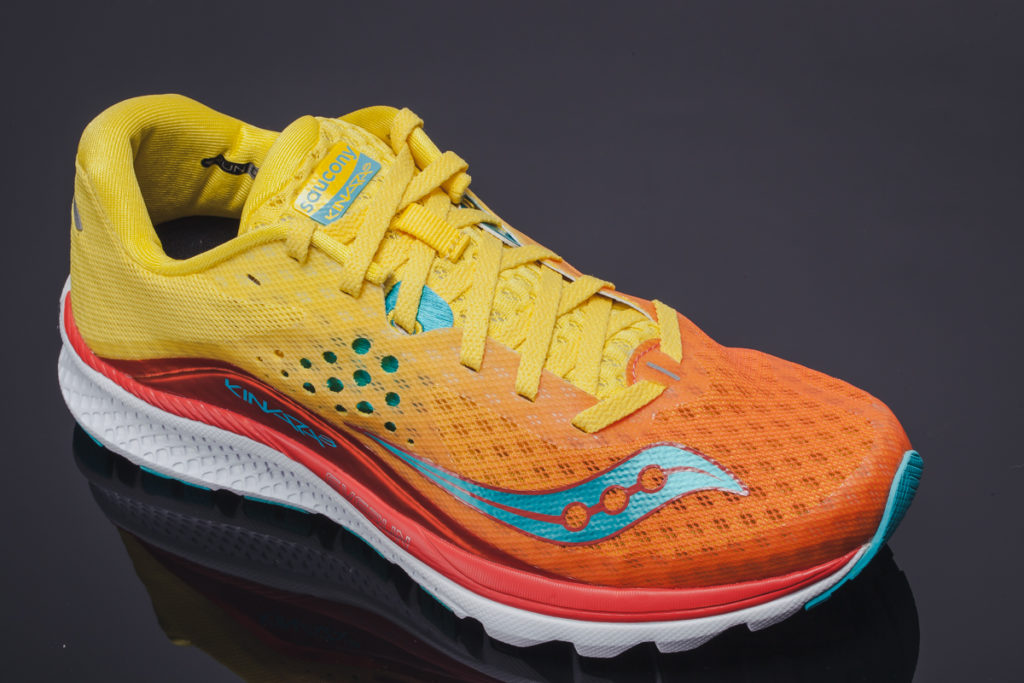 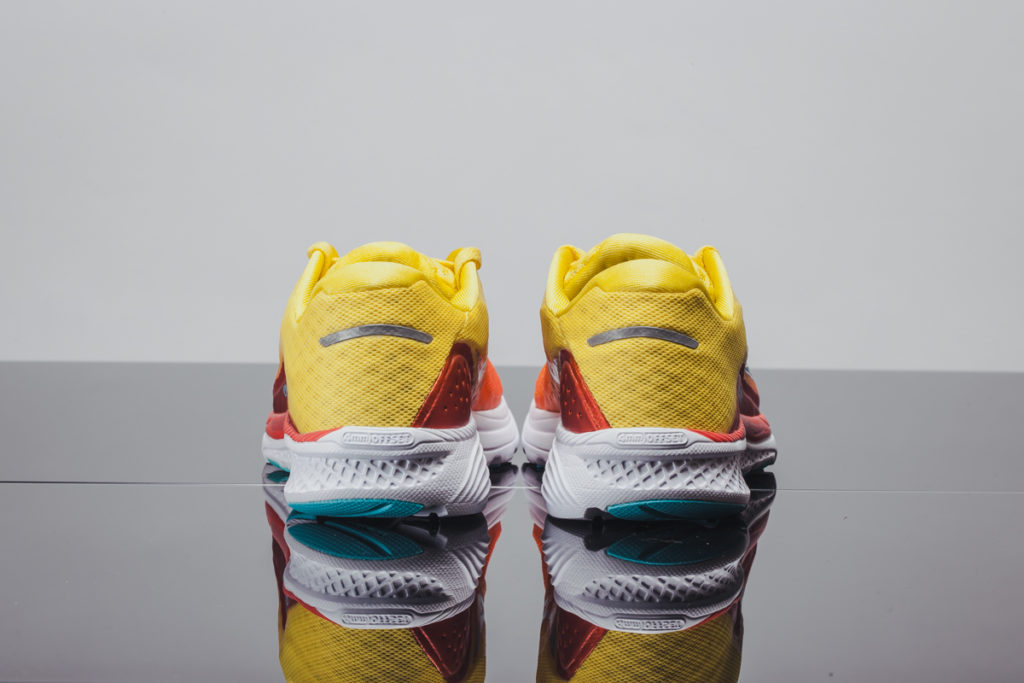 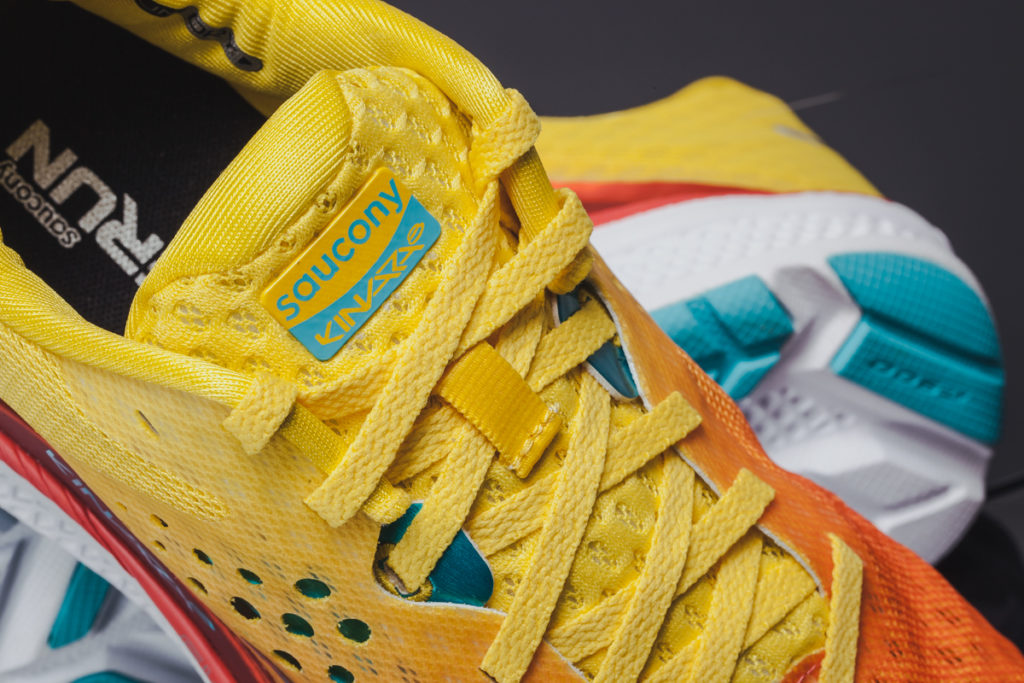 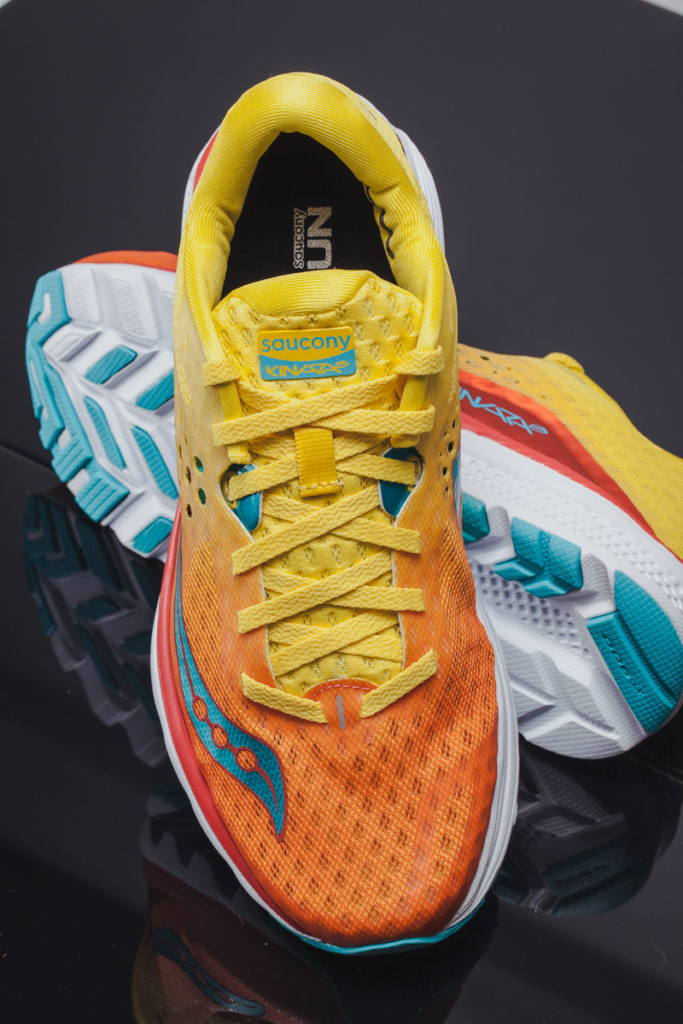 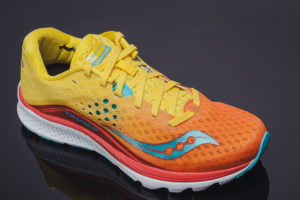 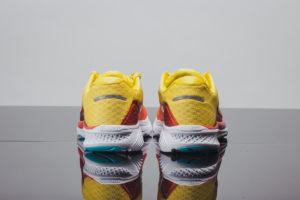 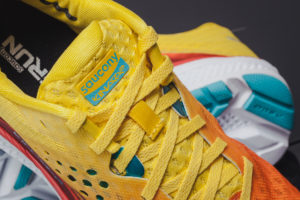 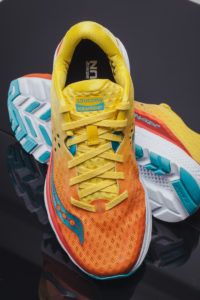 Light, fast and built upon its past. This year marks round eight for the slightly-refined Saucony Kinvara, a shoe which is considered one of the original minimal-drop, hybrid trainer-racers in the world of running.

The Saucony Kinvara 8 reaffirmed one of the best feelings a runner could get from a pair of shoes: not second-guessing your footwear and never hesitating on which shoe to wear on any given day. The Kinvara 8 is light, responsive and is stripped down to keep running as it is originally intended to be: simple. Now, the details…

RELATED: Take your running adventures off road with the Saucony Peregrine 7.

The shoe is light. Sub-eight-ounces light. For runners who are heavy on their feet, or are used to a maximal-cushioned shoe, the Kinvara 8 will provide a relatively responsive feel. Those familiar with Saucony will be glad to hear that the Kinvara 8 features the brand’s Everun technology for lively cushioning. The drop (the difference in the height from the heel to the toe) is in line with many lightweight trainers in the industry at 23 mm to 19 mm. (The original Kinvara 1 also had a 4 mm drop.)

The tongue on the Saucony Kinvara 8 is crazy soft, to the point where you can tighten the shoelaces about as far as they go without feeling any discomfort. This became increasingly useful as the shoes were broken in. Although tying the shoes tighter became increasingly necessary with each passing run, the upper maintained a new shoe vibe past the 500-kilometre mark.

Yes, CR put more than 500K on the Kinvara 8s. We feel that that says a lot. Running over 500K is particularly impressive as many may think that a lightweight trainer just doesn’t have that kind of life expectancy compared to a more structured shoe. Besides the discolouration (thanks Canadian winters), the shoe remains quite intact after putting it through the rounds (as well as the unexpected elements like salt, ice and snow).

When lacing up, one feature that runners will notice is an isolated shoe hole that holds what Saucony calls the “pro-lock” in place. There was a moderately cumbersome “pro-lock” tag on the Kinvara 7. That was axed in the 8. The triangular mesh tabs basically provide additional support around the upper and locks the foot down. This was particularly apparent during a 10K workout at half-marathon goal pace. Not only did it feel like a workout flat, the Kinvara 8 held up for tens of minutes on end like a trainer would. 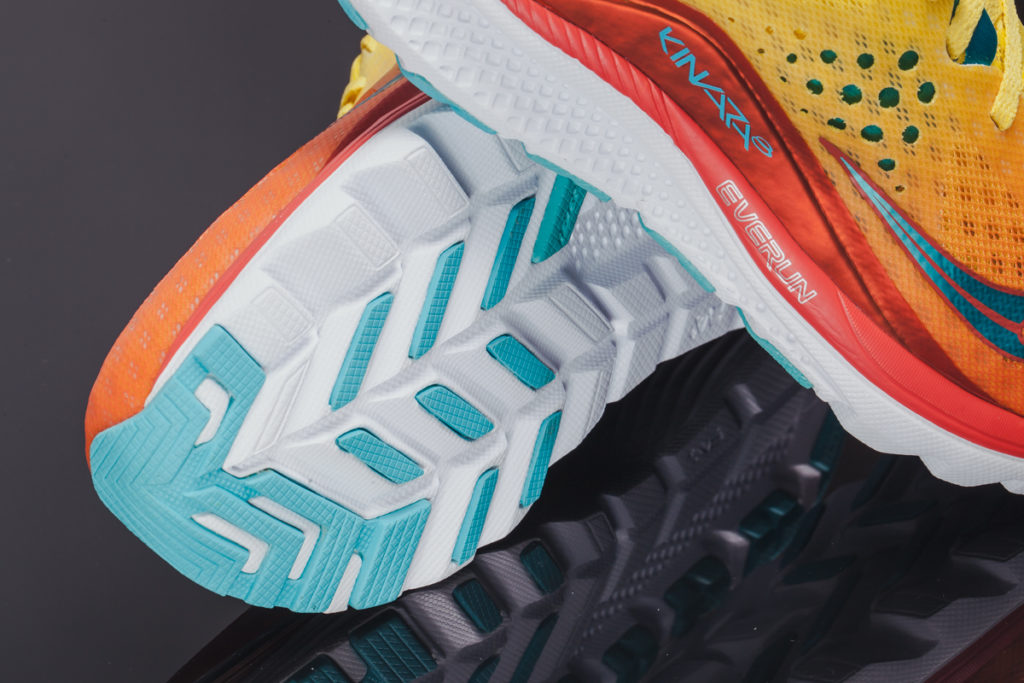 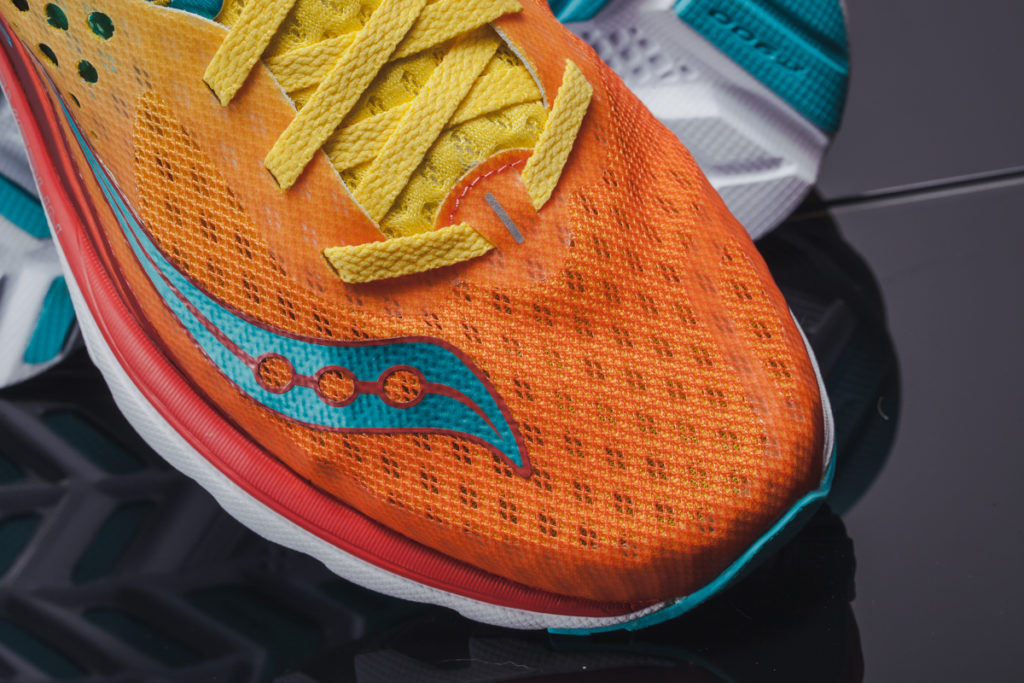 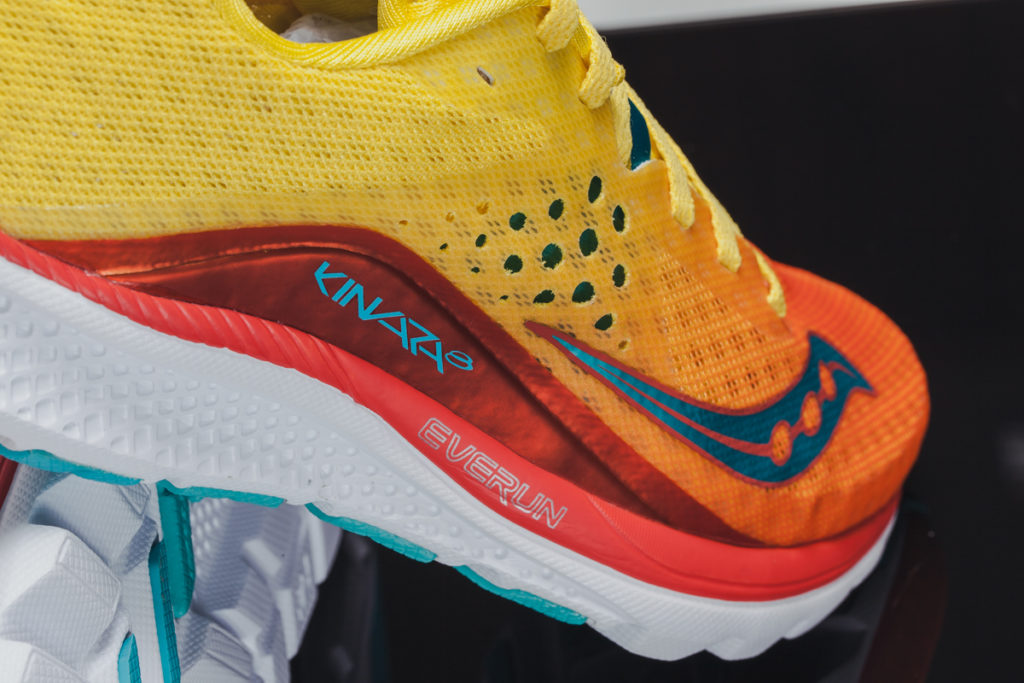 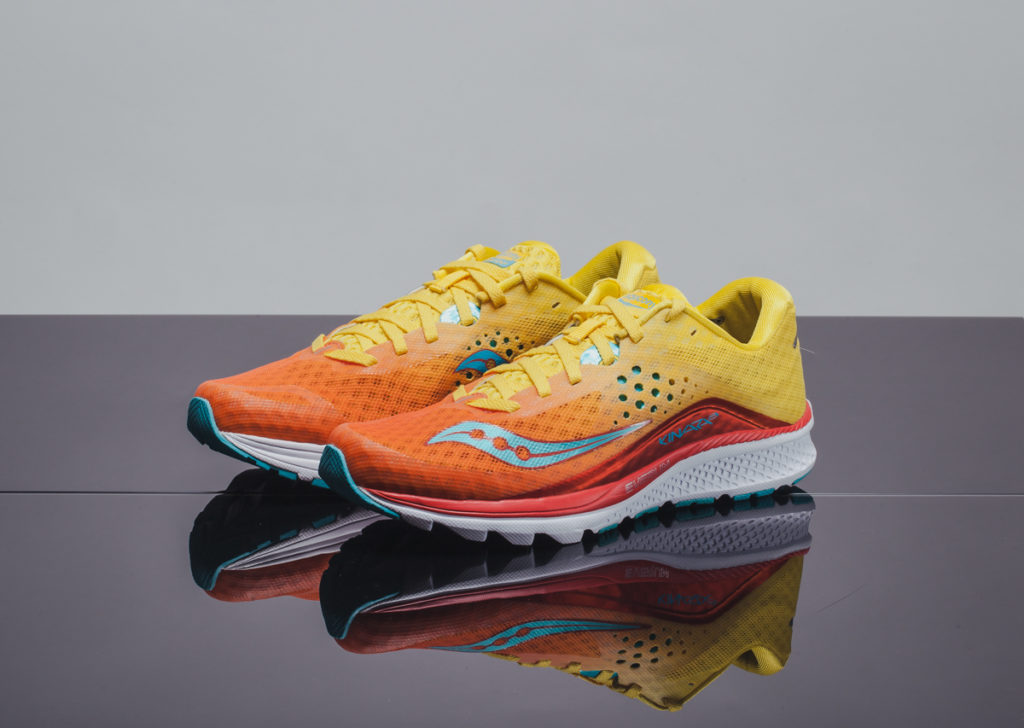 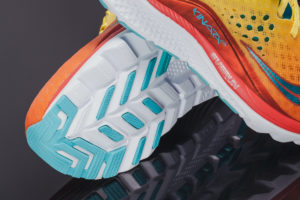 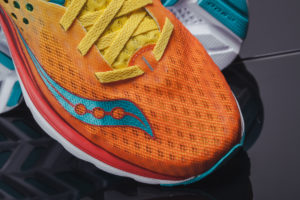 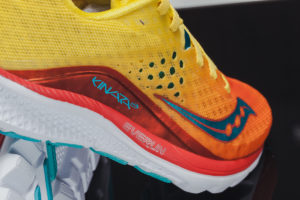 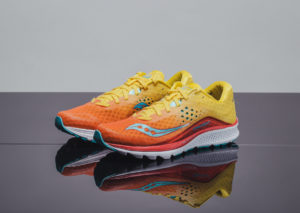 What about the structure?

Structure-wise, the heel is soft. This is in line with the shoe offering a more “natural” feeling rather than having your foot wrapped up in extensive layering and protection.

Understandably, as the shoe is intended for the track and the roads, it’s best to wear the Kinvara 8 as intended rather than adventuring off to technical terrain. (If you’re looking for a trail shoe, however, see what CR thinks of the Peregrine 7.) For the most part, much of the shoe incorporates an unstructured design with no stiff points and with soft cushioning throughout.

Slated for a March 1, 2017 release, we imagine the shoe will be a go-to in the summer heat as there are multiple points of aeration, perforations specifically, through the upper. (CR tried this shoe out in the winter and the breathability provided no adverse effects.) Compared to the Kinvara 7, the previous year’s model, one of the main differences in the Kinvara 8 is a reduced upper where the toebox is seamless.

At 500K, the most apparent point of wear was on the sole at the underside of the toe. Really, this is perhaps one of the expected wear points considering the shoe’s lack of drop. It’s a better scenario versus wearing through the upper, which would just make the shoe unusable.

CR‘s verdict: Get the Kinvara 8 if you enjoy a responsive ride, if you’re looking for a lightweight trainer or you enjoy a more-cushioned racing flat. If you check off one (or more) of those preferences, you’ll likely enjoy the Kinvara 8 as much as we did.

Look for the Kinvara 8 online or shop local at your nearby retailer.