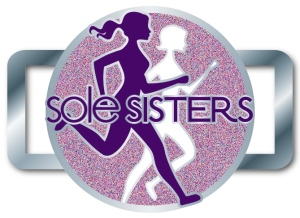 The Sole Sisters Race is a women’s only, untimed 5K that takes place in Dartmouth, N.S. on the first Saturday in June each year. When we caught up with race director, Stacy Chestnutt, after the last race (the largest women’s only 5K in Canada), she talked about making the race a uniquely female experience–which means especial attention to the details.

Chestnutt has proven that she continues to pay attention to the small stuff–after realizing that many women treasured their finisher’s medals long after the race was over, she incorporated key chain medal-replicas in the 2014 race. In 2015, finishers will receive a shoe charm–a small version of their finishers medal that is easily woven through a shoelace, allowing them to keep a reminder of their efforts with them on every run.

The shoe charm is in addition to several other items of race gear, including a sparkly finishers medal, women’s cut t-shirt and a tutu, which is guaranteed to the first 2,000 participants.

The Sole Sisters Race, taking place on June 6, 2015, is already over 50 per cent sold out (possibly due to the fact that it made our women’s only race bucket list).

With race organizers becoming increasingly creative with medals (we’ve seen belt buckles, bottle openers, you name it), we can’t wait to see what they come up with next.