Last month, Garmin unveiled its new premium multisport watch, the Fenix 7X, which is designed for runners, fitness freaks and data lovers. The Fenix 7X features an always-on colour display, 28 days of battery life (with 89 hours of GPS) and top-notch health monitoring. It’s also the first watch we’re aware of to feature a multi-LED flashlight, which is super useful. 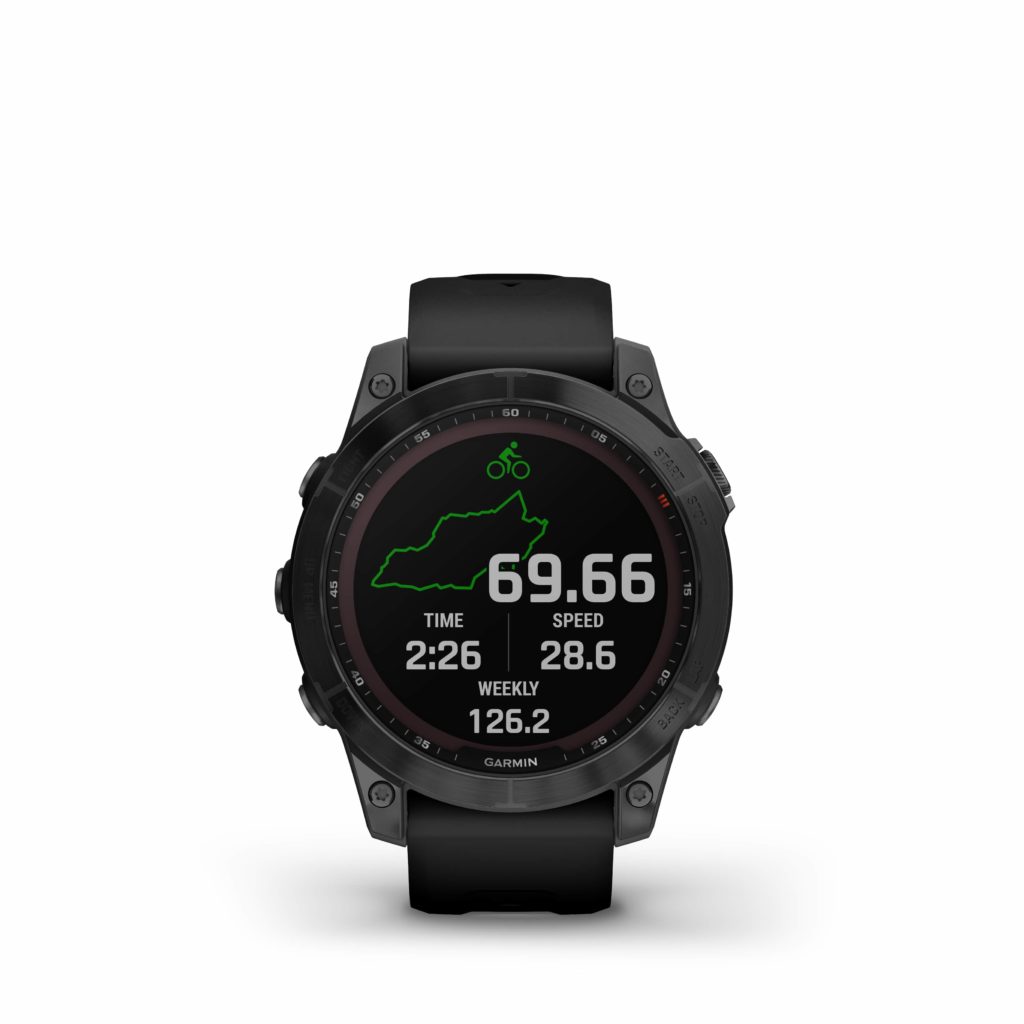 Over the past two weeks, I put the Fenix 7X through the test, and uncovered some new favourite features.

The Fenix 7X has an integrated hands-free quick-access multi-LED flashlight, which is a game-changer for trails or when you need light during the night. You can program the red and white light to flash in sync with your running cadence for visibility on the trail or road at night. And if you need a flashlight in the middle of the night, it can easily guide the way to the kitchen, bathroom or (if you’re camping) outdoor privy. 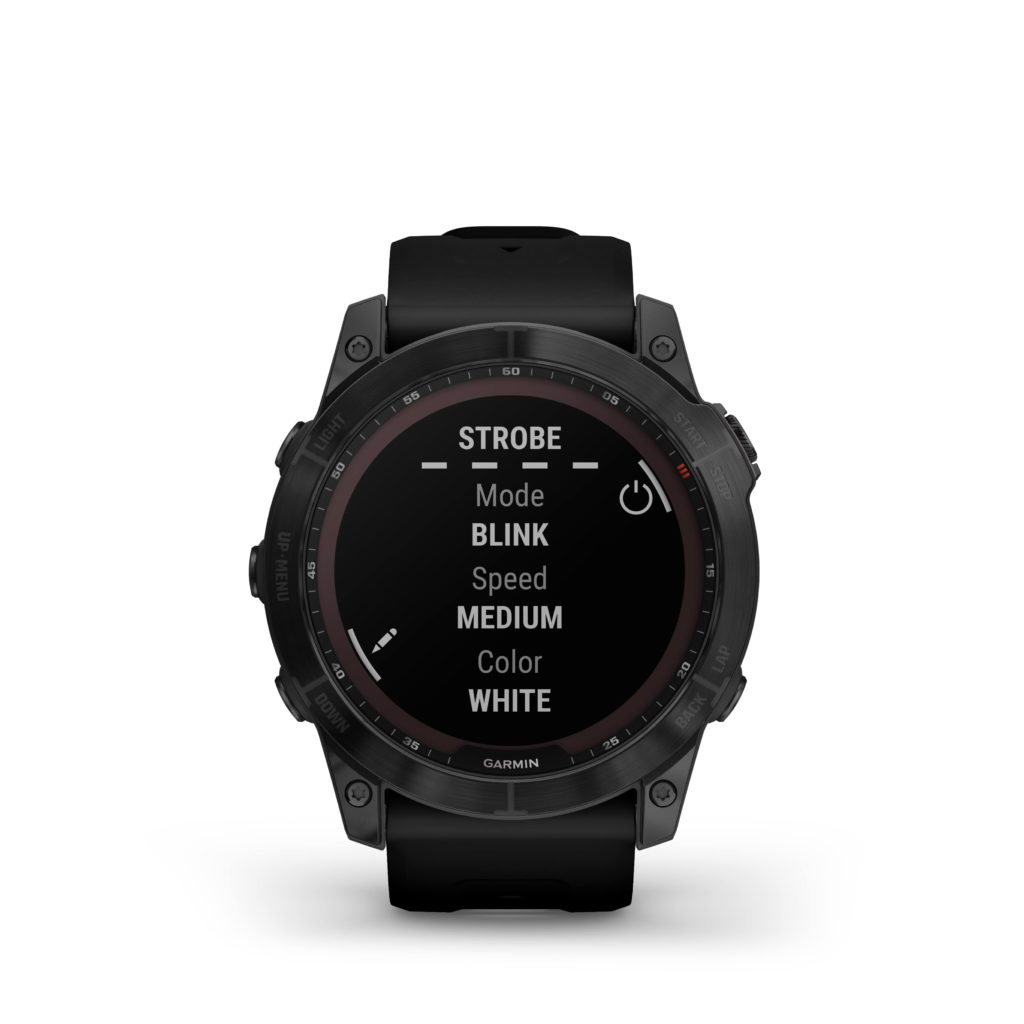 Also new on the Fenix 7X is the guard on the start/stop button, reduces accidental starts/stops by gloves or jacket sleeves. Although it was hard to notice, the button doesn’t stick out as much as it used to on previous watches. It took one or two runs to get used to the button guard (it means the button requires a little more dexterity); it also gives the watch a sleeker look. 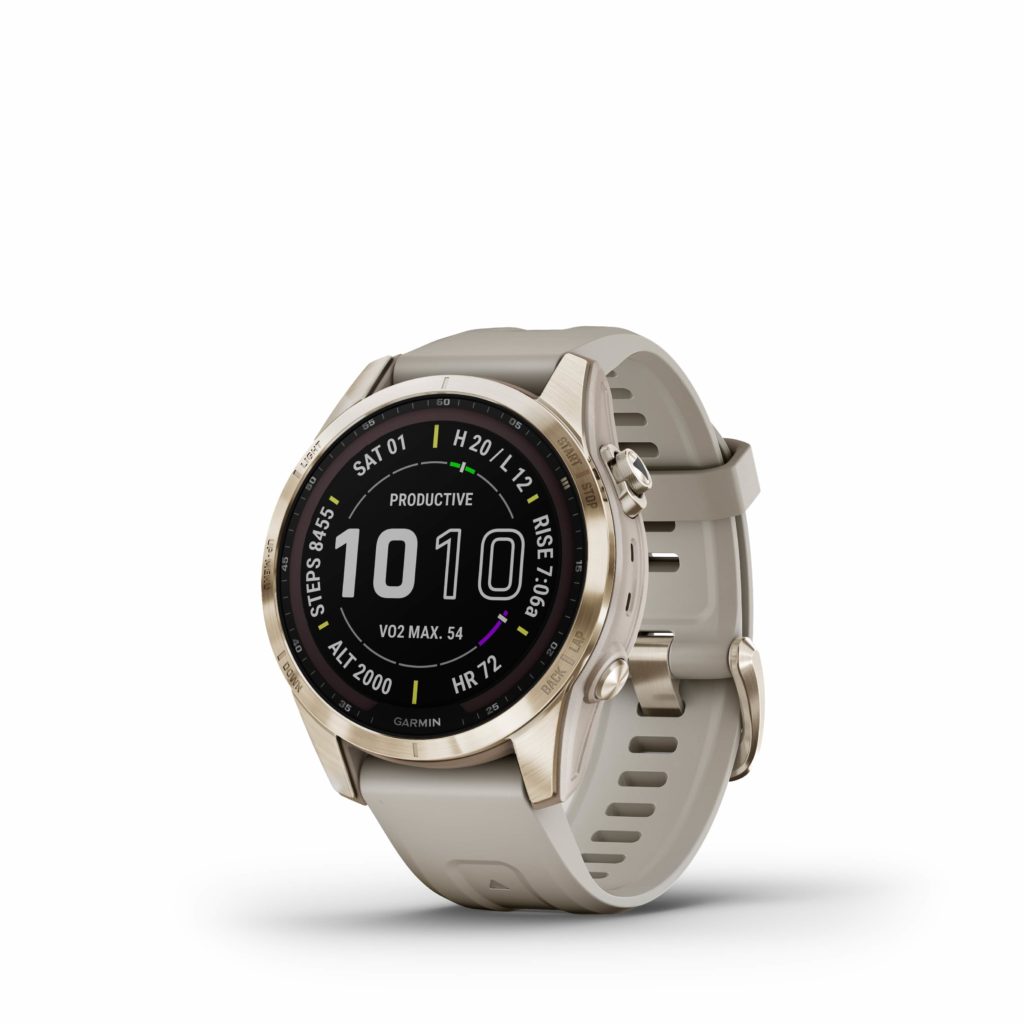 The new display on the Fenix 7X allows you to swipe through the menu and tap items just as you would on a smartphone, and it even works well while the watch face is sweaty or wet. (The touch function is completely optional.) This makes it easier to navigate to the data screens via the home screen, but my favourite part about it is to be able to access the screen glow with just a light tap on the watch face instead of the button. Many other compatible touch screen displays can be downloaded for free from the Garmin Connect store.

The watch has easy-to-read step tracking, stair tracking, and the new Garmin Elevate V4 HR sensor, which was introduced on the Garmin Venu 2 in the spring of 2021. This new sensor provides 24/7 HR accuracy, as well as workout heart rate, as well as pulse oximetry (which reads your blood oxygen levels). The sensor is used to drive many other data points, like stress level and your breathing rate. (The stress level reading is insanely accurate, as I discovered when rushing to find my keys when leaving my apartment to get to work.) All readings contribute to your body battery, which is your energy level throughout the day. Every night, your body battery is charged depending on how many hours of sleep you got. 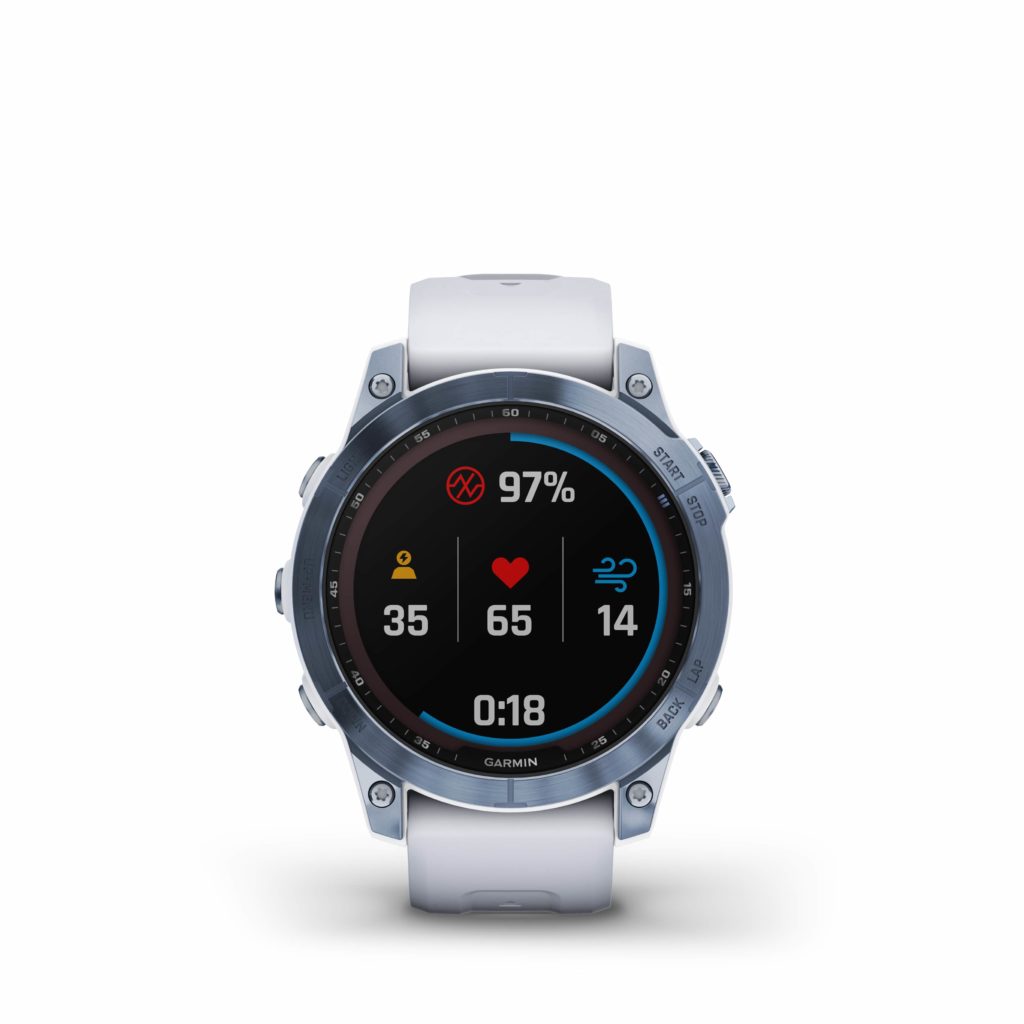 Solar capabilities were first introduced on the previous version of the watch, the Fenix 6, and was later released to the Garmin Enduro series. The battery life on the Fenix 7 is far superior to its predecessor’s when you can take advantage of solar charging, since the new watch’s solar panels are 54 per cent more efficient than the 6’s. The watch gives 28 days of battery life (or 89 hours in GPS mode), and up to 37 days with solar; I’ve noticed that solar charging is much faster than either the Enduro or the Fenix 6.

Up Ahead is a new feature that shows your upcoming waypoints or checkpoints along your route. When using the Up Ahead feature you’ll immediately see the next waypoint listed with how far it is in distance. Then the next three closest waypoints will show after that. 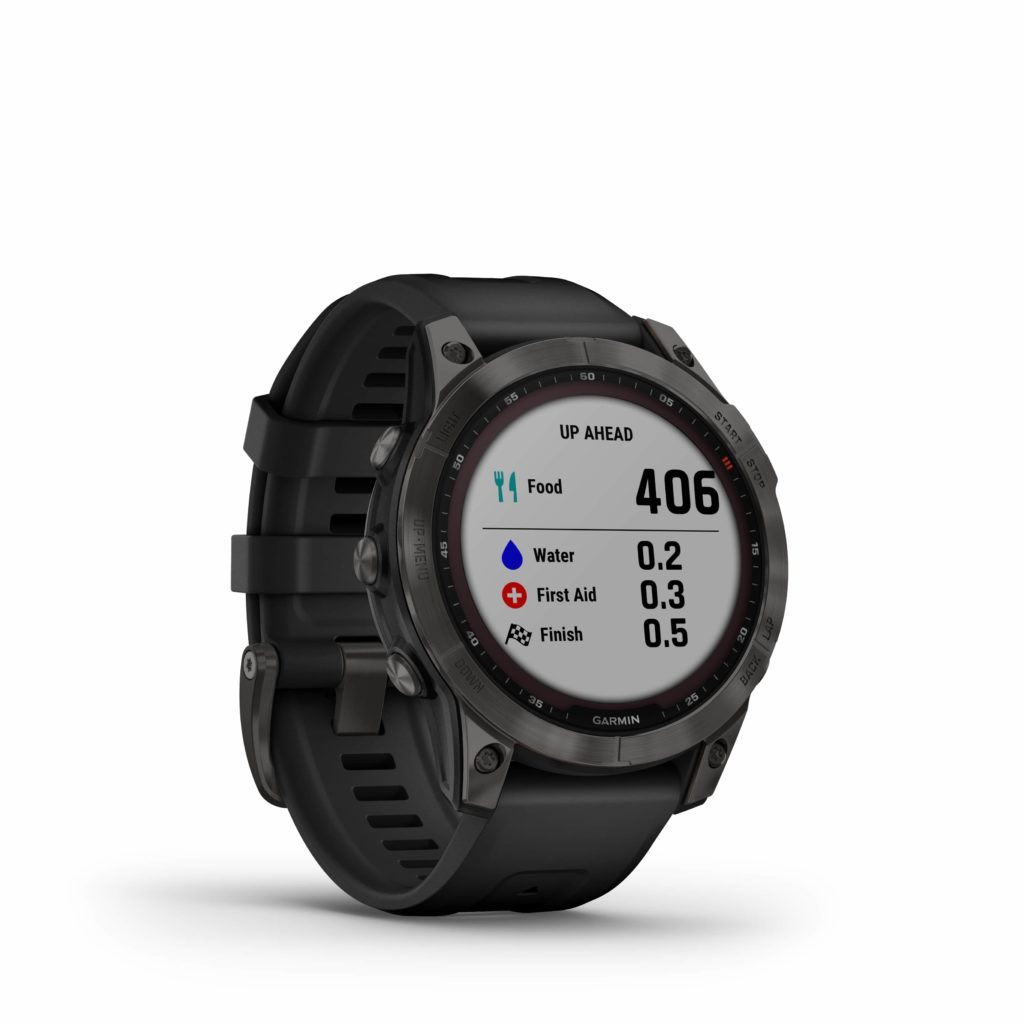 Data freak that I am, this is the perfect watch for me or anyone obsessed with the numbers behind their training. The 24/7 accuracy of the new Elevate HR feature couldn’t be more spot-on, which makes it substantially useful for threshold, tempo and easy runs to make sure my HR remains in particular zones. The Fenix 7X gives advanced metrics such as aerobic and anaerobic load and shares recovery tips on how to get the most out of your training. My only bone to pick is about its weight compared to other Garmin models. Once I put it on, the weight was the first thing I noticed (it weighs 89 g)–though I got used to it while running. The Fenix 7 Sapphire Solar weighs twice as much as the Garmin Forerunner 55 and a third more than the Enduro.

This is the perfect watch for athletes looking to get inspired by their data and who are driven by long-haul performance. In my opinion, the Fenix 7X has every feature necessary to perform at the highest level.