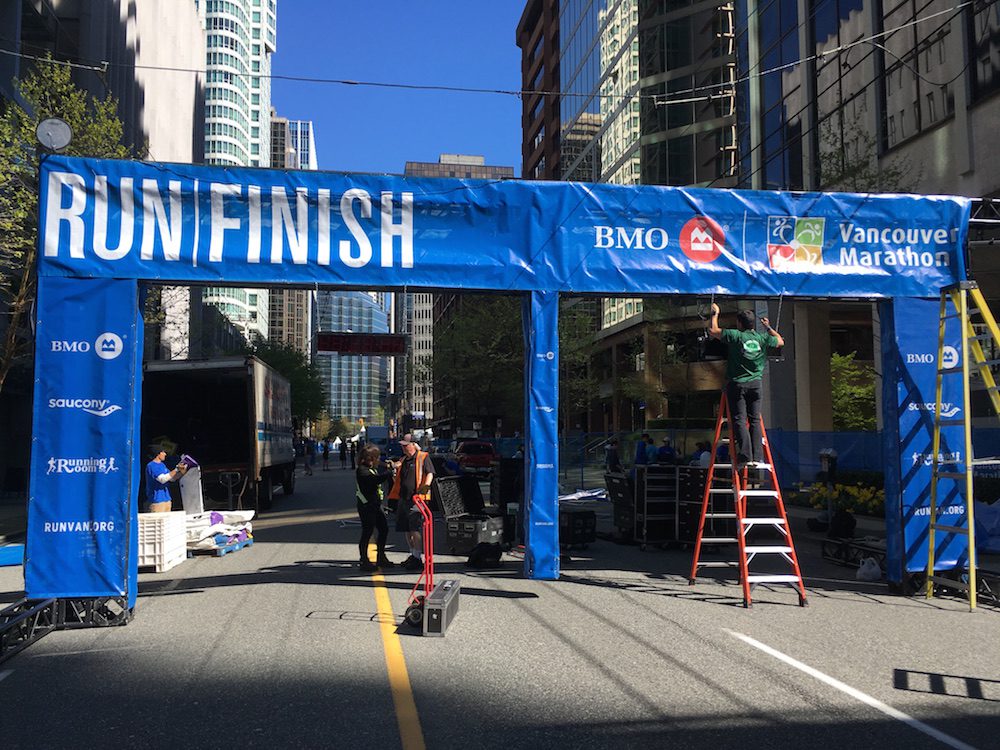 Vancouver’s only marathon goes off on Sunday morning from Queen Elizabeth Park before finishing downtown on West Pender Street.

The BMO Vancouver Marathon, in its 46th year, features a half-marathon, 8K, relay and kids run in addition to its namesake distance. Here are the top stories to watch on Sunday.

Mid-race motivation in the form of a video message

At the race expo, Saucony offered runners the chance to record a video message that will be played on course during the half-marathon and marathon. At a cheer zone late in both races, a large screen will be synced with participants’ timing chips so the corresponding message plays at the correct time. That may well be the mid-race motivation you need to dig deep to the finish.

Who are YOU cheering for? 🏃 Show your support for friends & family running #BMOVM. Your message will play as they run past our cheer screen! pic.twitter.com/yElCXzSgON

The fun doesn't stop at @BMOVanMarathon Expo! Record a video cheer at our booth when you collect your race kit. We're here until 6PM #RunVan pic.twitter.com/MwSVvj2yjl

Record a video message for your friends running @BMOVanMarathon 🎥 It will play as they race past our cheer screen along the course! #RunVan pic.twitter.com/FvphWhxTRC

First run in 1972, the Vancouver Marathon will welcome its 100,000th finisher during the race on Sunday. The yet-to-be-determined runner will win a roundtrip flight for two to Paris and two entries to the Paris Marathon courtesy of Air France as well as a $200 BMO Mastercard, $100 Running Room gift card, Saucony shoes, and a sweet Powerbar prize pack.

James Makokis and Anthony Johnson will begin the BMO Vancouver Marathon as an engaged couple. By the time they finish, they will be married. The wedding is expected to take place around the 31K mark on Beach Avenue.

Battling it out at the front of the half-marathon pack will be some of the province’s top distance runners including Olympian Natasha Wodak. The BMO Vancouver Half-Marathon doubles as the B.C. Half-Marathon Championships so there will be added incentive among the local contingent.

Watch out for the racewalker(s)

Evan Dunfee, an Olympian in the 50K race walk, is aiming for a 3:15-3:20 marathon on Sunday. South African Marc Mundell, a multiple-time Olympian, will also walk the Vancouver Marathon.

Rob Watson in the marathon

How to follow CR at the 2017 BMO Vancouver Marathon