This isn’t a time trial, it isn’t a race with three competitors, and it isn’t virtual – today is the in-person Monaco Diamond League. Friday’s race is the first full-field track event since March, and we truly can’t wait. There are two Canadians entered and a 5,000m world record attempt from 5K (road) world record holder, Joshua Cheptegei. This is a running event you won’t want to miss. Here’s the rundown of the distance events and entrants.

Canadians can tune in via NBC sports and NBC Olympic channel (however, these are behind a paywall). They can also watch for free via CBC.ca.

Canadian to watch: Marco Arop, who stunned fans at the 2018 national championships when he took the title over Canadian record holder Brandon McBride. He went on the make the World Championship final in 2019.

The contenders: There aren’t any Canadians to watch, but this field is packed – like World Championships packed. It’s got Sifan Hassan, who’s won both the 1,500m and 10,000m in an unprecedented World Championship double. She’s joined by two-time defending 5K world champion Hellen Obiri, steeplechase world record holder Beatrice Chepkoech, and 15K world record holder Letesenbet Gidey. It’s not out of the question that the women’s world record of 14:11.15 held by Tirunesh Dibaba could fall today.

The contenders: Timothy Cheruiyot, Yomif Kejelcha, Craig Engels, and Ingebrigtsens double trouble (Filip and Jakob). Kejelcha is the indoor mile world record holder, Engels is the defending American champion, Jakob Ingebrigtsen is the multi-U20 European record holder and Cheruiyot is the 2019 world champion in the event. 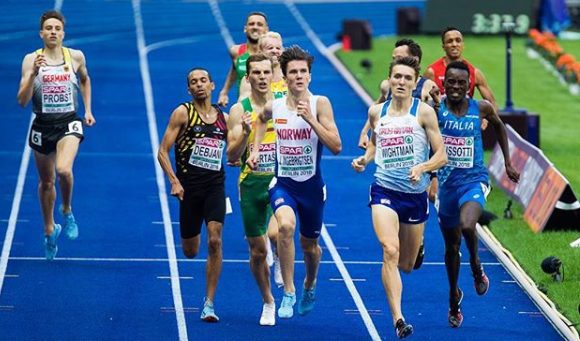 The contender: This is the race we’ve all been waiting for – the men’s 5,000m is a world record attempt from Uganda’s Joshua Cheptegei. The record is currently held by Kenenisa Bekele at 12:37.35. This is the race of the day.

Canadians to watch: Matt Hughes is running his first steeple of the season in pursuit of a new Canadian record. He currently holds our national record at 8:11.64 which he set in 2013.

Other contenders: Four of the top five finishers from the 2019 World Championships are entered, but last week Conseslus Kipruto, the Olympic and world steeplechase champion, tested positive for COVID-19 and as a result won’t be able to race.